Join Flipboard on The Red Couch at SXSW 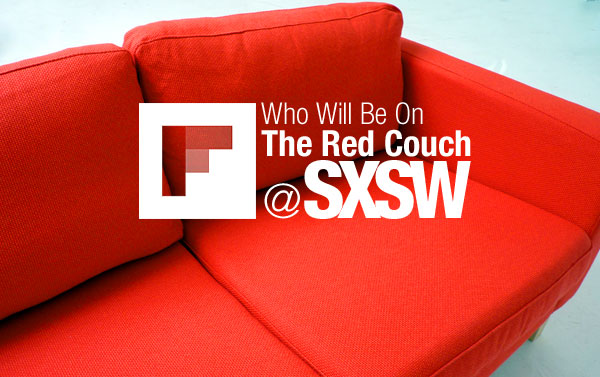 We’re bringing our signature red couch to SXSW and dropping it into the middle of all the action. On the couch, we will host video interviews with a collection of interesting people at SXSW, including Gary Vaynerchuk from Wine Library TV, Tim Kring, creator of the hit TV series “Heroes”, and the world-famous Duran Duran.

Not only have we lined up great guests, but the interviews will be conducted by hosts like Angela Watercutter, Robert Scoble, and Cathy Brooks. Keep an eye on Inside Flipboard or add the featured “Flipboard at SXSW” section to your Flipboard to see all the interviews and to know what else is going on in Austin.

If you happen to be in Austin, come see the interviews live. We’ll be tweeting where we are and who we’re talking to and tagging those tweets with #couch so just follow us or search for this hashtag. You can watch our interviews as they happen and we’ll be giving away lots of great swag. If you’re one of the first 200 people to show up, we’ll give you a limited edition Flipboard SXSW T-shirt.

Red Couch Photo Contest – Your Chance to Win an iPad 2

But wait, there’s more! There is another reason why you should watch for #couch tweets and come find us!

Flipboard is holding a Red Couch Photo Contest every day during SXSW. Take a photo of yourself, your friends or our guests with the red couch and tweet them with the hashtag #couchfan to enter the contest. Each day, we will pick the most beautiful, original, creative photograph from among all the hashtagged entries to receive a limited edition Flipboard skateboard deck! Daily runners-up will win a limited edition Flipboard red MoviePeg.

On Tuesday evening, March 15, we will select one photo from all entries in the Red Couch Photo Contest and announce the winner of the Grand Prize: an iPad 2!