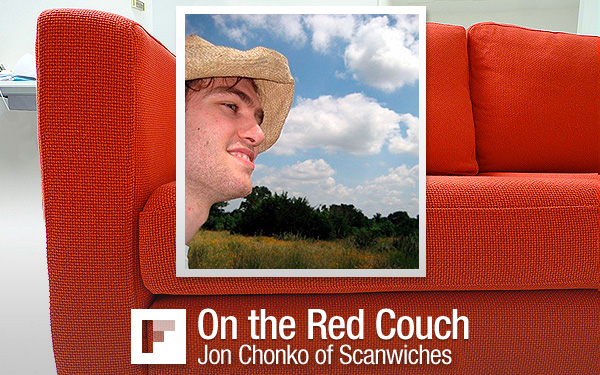 Scanwiches creator Jon Chonko slices sandwiches in two, then positions them on his scanner for artful views of towering piles of bread, meat, cheese, veggies, and who-knows-what-else. He got the idea for his blog from frequent lunchtime outings with coworkers to places like Katz’s Deli in NYC. â€œWe got in the habit of asking each other every day, â€˜Hey, do you want to get a sandwich?’ so often that we started playing around with the word,â€ he says. “Scanwich popped out, and I thought, â€˜Hey that could be something!’ The next week I was scanning my lunch.â€ 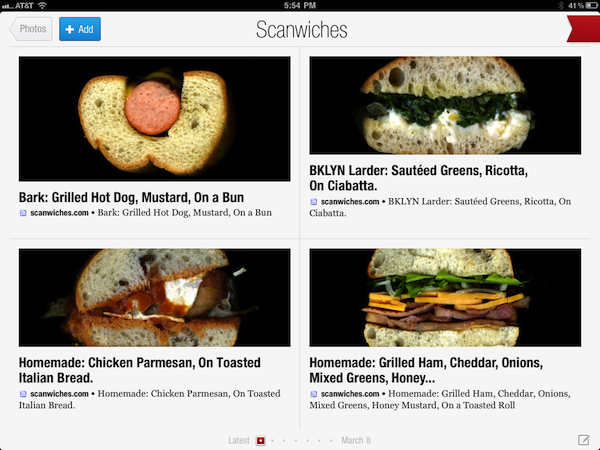 How does sandwich-scanning work?
It’s pretty simple. I get a sandwich, cut it in half, and put it face-down onto the scanner. A scanner is such a funny piece of equipment to work with. It’s very good at imaging anything a 1/4″ from its surface and pretty much ignores anything else. That’s really what gives Scanwiches its signature look. There’s a lot of little tricks I’ve developed along the way that help the scanner out. The way a photographer might try and control the lighting conditions, or styling of a subject in a studio, but really it’s just setting up the scanner to take the best picture it can.

What are some tips for a great sandwich?
Don’t over do it on ingredients. This is a rule Scanwiches often breaks because big sandwiches look great, but for eating, it’s important. It’s so easy to pile it on a sandwich. People also usually make sandwiches for themselves when they’re already hungry so it’s tempting to put a few more slices of ham, cheese, bacon, or tomato on as your stomach growls. But really good sandwiches, the ones that hit the spot best and marry all the flavors together are the ones that show moderation, restraint, and a perfect balance between all the ingredients.

What are your highlights? Most exotic sandwich? Grossest? Favorite?
The most exotic was probably a Chinese sandwich that I scanned for the book — a “jia mo.” It’s pretty rare outside the region of China it’s found. Even within China it’s not too common. Sometimes it’s called a “Chinese hamburger.” It’s basically rich, flavorful shredded meat between pan-grilled bread. I made mine with pork-belly. It was pretty great.

The grossest would have to be a Dagwood that I scanned for the Universal Record Database (now called Record Setter). The Record was “Most Toppings on a Scanned Sandwich.” It was pretty epic and sloppy. It didn’t help that it was made during a raucous party where alcohol was served. I just went down a grocery store aisle pulling anything I could into my cart. Most of it made it into the sandwich. It still holds the record.

My favorite is a turkey and sprouts sandwich I did last year. I LOVE sprouts, both to eat and to scan. They look so wild and dense. It was a tasty sandwich, too.

Does a sandwich taste better if you cut it in half?
I think so. Some sandwiches just aren’t made to be cut in two, and that’s fine. But for ones that can be, I think it helps get you to the best part first. The first bite of any sandwich is the most important. Cutting it in half means that you’re jumping into the best part right from the start.

Where do you get inspiration?
This is a hard question to answer. I’m not a very loyal blog reader. I look everywhere for stuff to taste and try. I think right now, the biggest source of inspiration are Scanwiches fans. I get a lot of messages from readers and followers about sandwiches they love, ones that remind them of childhood or some other fond memory. I think that’s what drives me now.