On the Red Couch: Molly Erdman of Catalog Living 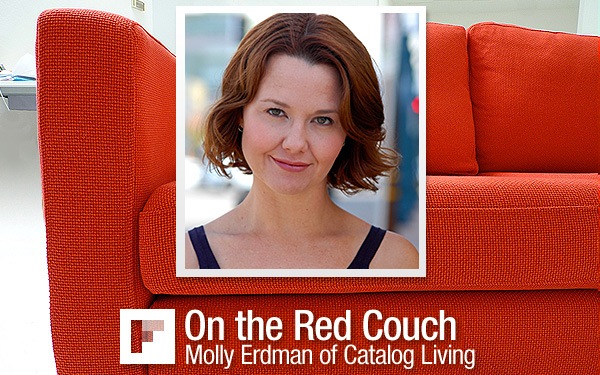 Meet Gary and Elaine, the people who live inside your catalogs. They’re the creations of Molly Erdman, an actor and writer based in Los Angeles and former main stage performer with the Second City comedy troupe. Gary and Elaine’s privileged lifestyle comes alive in Erdman’s blog, Catalog Living, in which she imagines what it must be like to live in a world where it’s totally normal to obsess over things like how to arrange a starfish collection on the mantel. 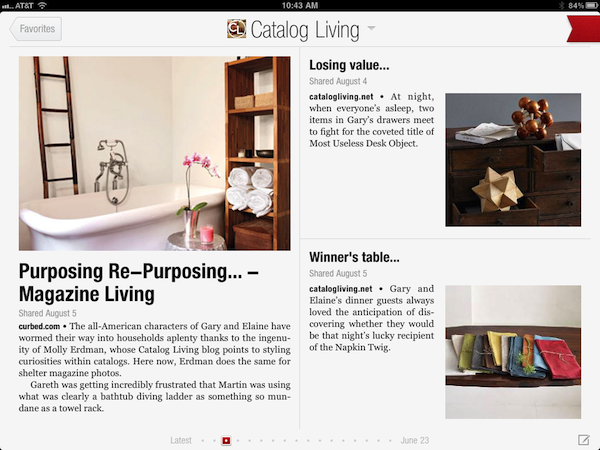 1) What is your writing process?
I spend a whole lot of time on home furnishing company websites, looking for good pictures. Some of them I write captions for right away, and others just get saved due to some potential I see in them. Some of the captions I write in the voice of Gary or Elaine, and some of them are third person. There’s no real strategy to that; it’s usually just however it pops in my mind. I usually sit down and try to do at least a week’s worth of posts at once. It doesn’t always happen, but Sunday tends to be my day to sit down in front of the TV and browse the catalogs.

2) Which catalogs give you the greatest inspiration?
Pottery Barn is definitely my number one go-to. West Elm, PB’s younger cousin, is also great (and where my first several posts came from). I’ve been introduced to some European ones recently, which offer their own brand of weirdness (think IKEA, but with leg warmers on table legs). Kids catalogs (PB Kids, Land of Nod) are also fantastic.

3) Which catalog would *you* want to live in?
Honestly, I buy the most things from West Elm, so I guess I’m trying to live in their catalog. I think living in an IKEA catalog would be the best though, especially with the limitless supply of Swedish meatballs.

4) What would Gary and Elaine read on Flipboard?
Elaine would read Bon Appetit to try to find something to pretend to cook, and Gary would read The Onion to get what he considers to be the actual news. He would also furiously shake his iPad and yell “Where are the funny cat videos?!â€

5) Where do you see Gary and Elaine in 20 years?
They’ll probably retire (from whatever job they have) and move into a Napa Style or Sundance catalog.

Tap Catalog Living to add it to your Flipboard.
Share:
Go to Flipboard