On the Red Couch with Author James Dashner 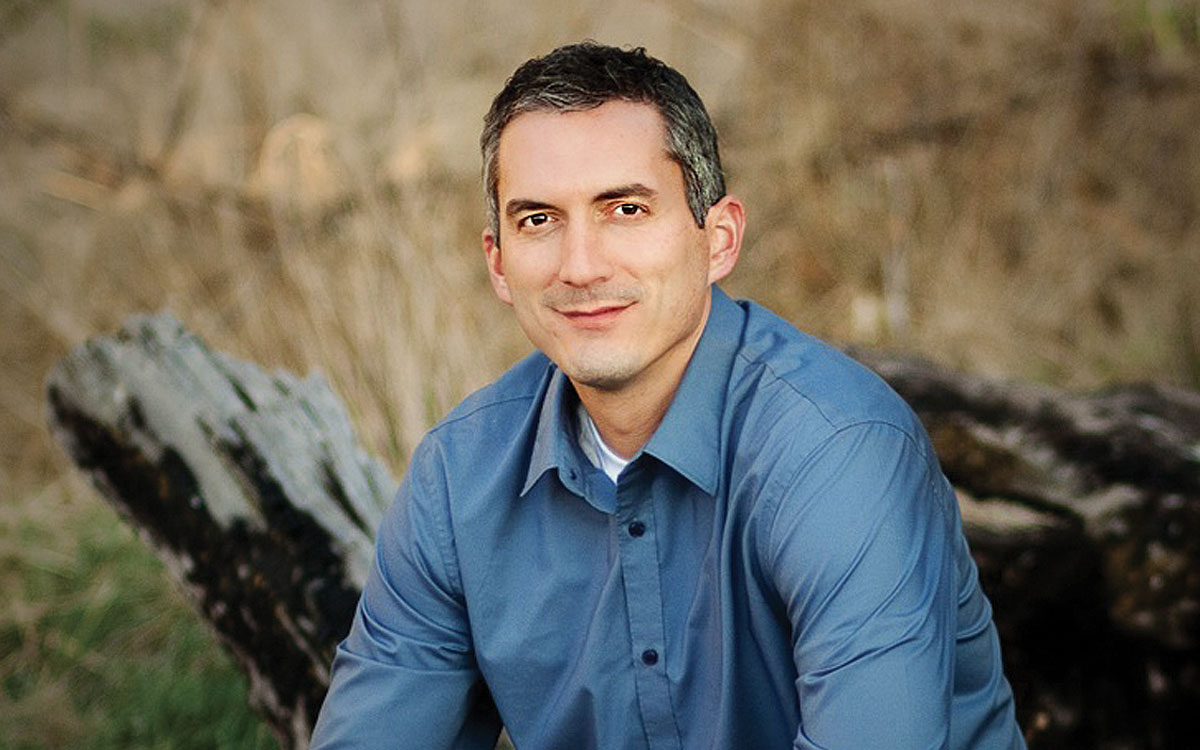 Sci-fi author James Dashner wanted to be a writer since he was a kid but decided to try his “backup plan” — finance accounting — first. It gave him a foothold from which he took baby steps toward his dream of becoming a published author: he wrote (a lot), worked with a small publisher to get familiar with the industry, and attended writing conferences to meet people and hone his craft.

His big break came when he got a new agent and sold his book, The Maze Runner, to Random House. The book takes readers inside The Glade, a large expanse surrounded by stone walls which clamp down every night. A new boy is delivered to The Glade by lift every 30 days, but when the first girl arrives she—and the message she brings—are a total surprise. The Maze Runner is set to become a feature film later this year and is sometimes compared to The Hunger Games (or at least might appeal to the same dystopia-loving crowd).

We caught up with Dashner as he was returning home to Utah for the holidays, just after visiting L.A. for the scoring of his film. We got the lowdown on the movie, his latest book, and his favorite entertainment escapes in 2013. You can delve deeper into his pop culture interests, passions and obsessions in his Flipboard magazine, The Dash-Board. 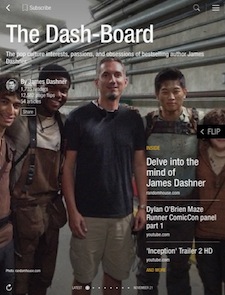 You were an avid reader as a child. What were some of your favorite books?
Oh man, when I was really young I loved Charles Webb, James and the Giant Peach, Judy Blume’s Super Fudge, the Hardy Boys books, and A Wrinkle in Time. All that kind of stuff. Then as I got older in high school, I discovered Stephen King and Dean Koontz, and more of the scary, thriller type stuff.

Is that how you decided what your own genre as a writer would be?
I just write what I think is cool. I’ve tried, with every series of book I’ve done, to be different from the one before. I don’t really think about genre or anything like that. I feel like all my books…would appeal to the same audience, but are very different from each other. That’s my goal in my writing career.

Can you talk a little about your latest book, The Eye of Minds?
Yeah, it was bittersweet to leave The Maze Runner behind, but also very exciting to do something totally new. I tried to show my readers that I can throw them something else they’d like just as much as The Maze Runner. It’s still set in the future, but it’s certainly not a dystopian novel or anything like that. Technology, virtual reality, gaming, electronic commerce and all this kind of stuff are extremely advanced—Matrix-level advanced.

It’s a story about artificial intelligence and learning the line between what’s real and what’s not real, and the awesomeness and dangers that come with advanced technology. It has some pretty cool twists and turns. I’m really proud of it.

How do real news events or technologies inform your writing?
A lot. I’ve been pretty active on Twitter, Facebook and things like that trying to [stay connected] to my fans, and it’s pretty cool to see I have fans tell that they’ve become friends with other people in my fandom; people who live on the other side of the country or planet, and they’ve never met. I see that all the time. That kind of inspired the relationship in The Eye of Minds; the main characters have never met in the real world. I think the things in my book are not only feasible but probable. Twenty or 30 years from now, we’ll have virtual reality that is extremely life-like. It’ll be cool, but it’ll also have a lot of problems that come with it.

What really scares you vis à vis our collective children’s future?
Every day you hear something that kind of makes you tense up a little bit: environmental stuff, technology crime, international disputes from politics and war. I think that’s why dystopian literature is so popular: it resonates. There’s this added fear factor that our world is on this path.

You’re a big pop culture fan. Let’s do a speed round of your favorites for 2013. Ready?

Favorite band or singer: This year I discovered Lily Allen. And I don’t know if I’m really uncool saying I just discovered her.
Favorite movie: Oh man, that’s a tough one between Gravity and 12 Years a Slave. It’s a tie between those two.
Favorite TV show: That’s a really easy one—Breaking Bad. I thought the final season was brilliant. I loved it.
Favorite book: Probably Night Film. It’s really well written, really clever and kind of creepy.
Favorite game: This year my family really started getting into more board games and stuff. My son’s fallen in love with the game Magic. We call it the nerd game. We also [like] this game Pathfinder, which is a [role-playing] game sort of like Dungeons & Dragons. It’s not what I expected. Another favorite is Ticket to Ride.
Favorite app or piece of technology: I’m definitely gadget geek. I’m kind of devoted to Apple. I love my iPad…and if I had to pick a favorite app, it would be iBooks because I read so many books on the iPad.
Favorite magazine: Entertainment Weekly. I read that cover to cover every single week.
Favorite blog: io9—they just seem to know what interests me to a tee.
Favorite play: We just went to London and saw Matilda, which is kind of a new musical and I thought that was really good. I also saw Spamalot, which I loved.

What’s something about you that not many people know?
One thing about me that surprises people is that I love scary/dark movies and books. People who’ve known me my whole life sometimes read my books and see a kind of darkness in them and wonder, “What is wrong with you?” But you can’t really show the good in people until you show something to contrast it with…So, I like dark, creepy stuff, which makes my neighbors scared of me. Oh well.