On the Red Couch with Author James Patterson 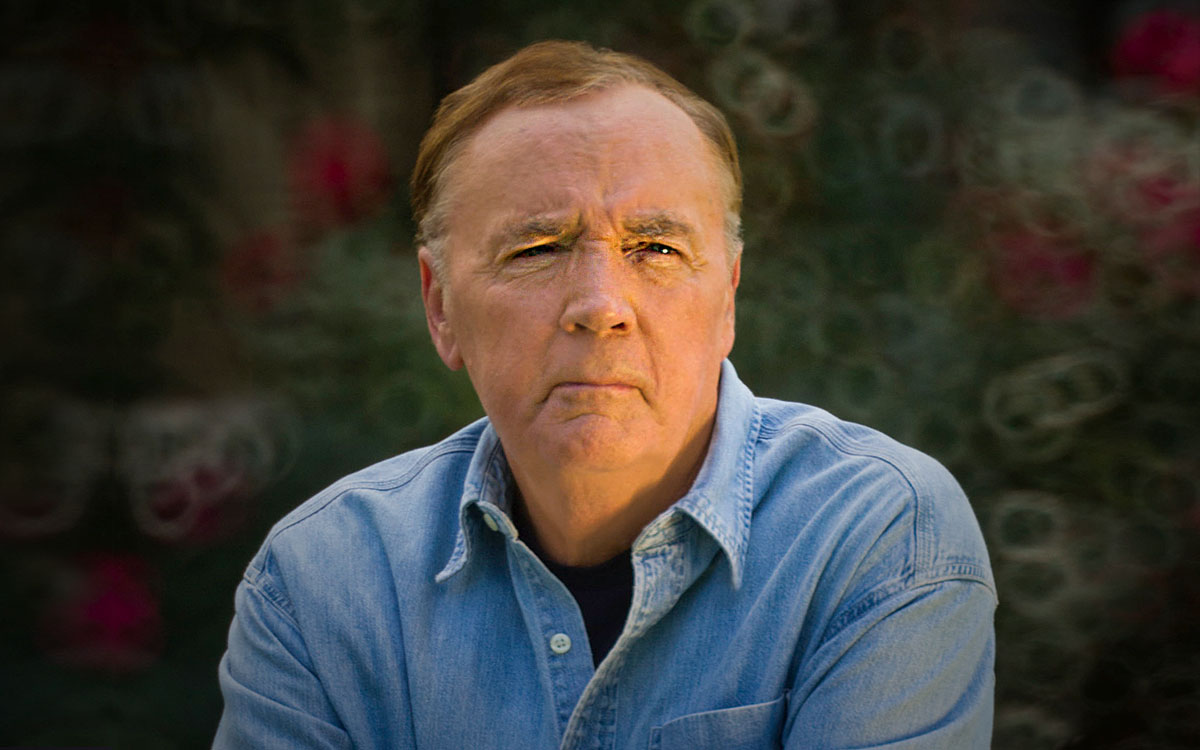 When James Patterson set out to be a writer as a graduate student at Vanderbilt, he says he just wanted to write books that “were as good as they could possibly be.” He wrote some fiction and then started reading thrillers, like The Day of the Jackal and The Exorcist. “I thought that I could conceivably write books that were suspenseful,” he says. “So I tried one.”

Ninety-five books later (with 300 million copies sold worldwide), Patterson is one of the most successful writers of our time. He’s sold more books than Stephen King, Dan Brown and John Grisham combined, and he’s responsible for such iconic characters as detective Alex Cross from books like Along Came a Spider and Kiss the Girls, and Jack Morgan of the Private series. (In fact, you can download Private for free this month from our partner, iBooks, as part of their iOS 8 launch celebration.)

Patterson is also a huge proponent of encouraging kids to read—and to love reading. Here’s what he had to say about this important mission and more…

Can you tell us a little bit about the inspiration for Alex Cross?
Well, I grew up in Newburgh, New York, which is a tough little river town about 60 miles from New York City—pretty significant African-American population. My grandparents ran a little bar/restaurant. The cook there was a black woman, and she was having trouble with her husband so she moved in with us for a few years. I spent a lot time with her family. I loved just the way they were. I loved their spirit—the music, the food, the wit, the charm. I also played a lot of basketball in those days, and most of the best basketball was in the parts of town that were African-American. So I hung out with a lot of kids like that. And then, as I got older, I just didn’t like the way African-Americans were portrayed in the movies in those days—sort of the guy with the ghetto blaster on his shoulder—and I said, “That’s not really representative.” So I wanted to create a man who was different from all those stereotypes.

And how about the character Jack Morgan. How did he come to be?
[I wanted to create] a worldwide organization that was the best investigative unit in the world in pretty much every city that they were in, and get a character who was obsessed with making that happen, who was basically pretty ethical about conducting business in a line of work that is infamous for being a bit shady. He had been a marine and he just wanted to do things differently. That fits with the way that I would like to see things more [in today’s world], in terms of corporations having a really powerful ethical side to them.

How do you keep serving your fans? You’re such a prolific writer.
Well, if you were in my office, you would see there are shelves all the way around the room. There’s one folder that’s about four-inches thick now and it has a very clever title on it called “Ideas.” I just keep adding to that. I have probably a couple of thousand ideas for books, and I keep adding to them. So it’s never been a problem. The way I write, if I get to a chapter and I’m not getting it right away, I just go on to the next chapter. And if a book is stalled, I just go to another book.

Of all the books that you’ve written, which is your favorite?
I don’t have a favorite. I’m very happy to have created a lot of memorable characters: Alex Cross, the entourage in Private, the idea that Private takes readers around the world, The Woman’s Murder Club series, Maximum Ride, and then the kids stuff, the younger kids stuff which I love: Middle School: The Worst Years of My Life and I Funny, which is about a kid who wants to be a standup comedian. He studies every comedian in the history of mankind and then he starts writing his own jokes. But he could never really be a standup comedian because he’s in a wheelchair. One of the things we find is that it’s the power of humor to help us pass the bumps in life. I think my kids books are probably the best things that I do.

In fact, you’re a big advocate for getting kids excited about reading. Why is this issue so close to your heart?
As individuals, we can’t solve the healthcare crisis or do much about global warming. But we can get the kids in our house reading. We can help the local school. And in my case, I can reach out even farther than that. At this point, I have scholarships at 24 different universities, over 400 scholarships for teachers; I just shot a pilot for a kids variety show out in Hollywood which is all about celebrating the arts. I think we’ve given away over 700,000 books now to kids and to the military. It’s something that I can do.

We just have one boy, Jack, and when Jack was little he wasn’t a big reader. He’s a smart kid but he wasn’t a big reader. When he was eight we said, “You’re going to read every day in the summer.” And he said, “Do I have to?” And we said, “Yeah, unless you want to live in the garage, but we’re going to get cool books for you.” We wound up getting a dozen or so books ranging from Percy Jackson to Al Capone Does My Shirts to A Wrinkle in Time, etc. etc. By the end of the summer, Jack had read 12 books and he liked all of them. His reading skills had improved dramatically. When Jack did his SATs, he got an 800 in reading.

What are some books you think every child should read?
My favorite kids’ book is The Book Thief. But that’s not for all kids: it’s a dark and tough book. I don’t think there’s a book that all kids should read. The main thing is that kids read a book and when they’re done they go, “Give me a another book.” That’s the kind of books kids should read. It takes a lot for kids to be ready for Shakespeare. We just should not be giving kids books when they’re going to turn them off because they’re not ready for them.

Are you optimistic about the future of books? What do you think happens to them in the next few years?
I think eBooks are terrific for people. I wish more kids were aware of eBooks because kids like screens. On the other hand, I think it’s important that we have bookstores and places where people could go and feel comfortable about talking about books. Right now we do not have a way to do that on the Internet in the way that we would like to. My theory is that in five years from now, the equivalent of Ulysses comes out and it goes onto the Internet with a million other books, and it immediately gets 10 F’s—”Couldn’t get through the first page,” “Couldn’t get through the first chapter”—and then it disappears from the Earth. That’s my fear. That Robert Caro never gets to write all those books on LBJ because nobody would give him the advances he would need to take the time to go and write them. I think those are the problems we’ll have to deal with. Look: if it all winds up on the Internet, so be it—as long as people can get the information that they need to be able to find books that really are superior, whether they’re literary or commercial, and that writers can be encouraged and mentored and find a way to write books.

Flip through this magazine for more about James Patterson and to quickly get to his offerings on iBooks: 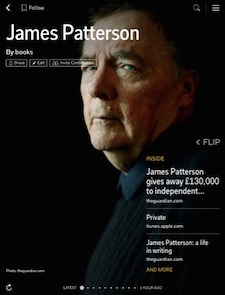 Click here to read more about James Patterson on Flipboard.