On the Red Couch with Author Margaret Atwood 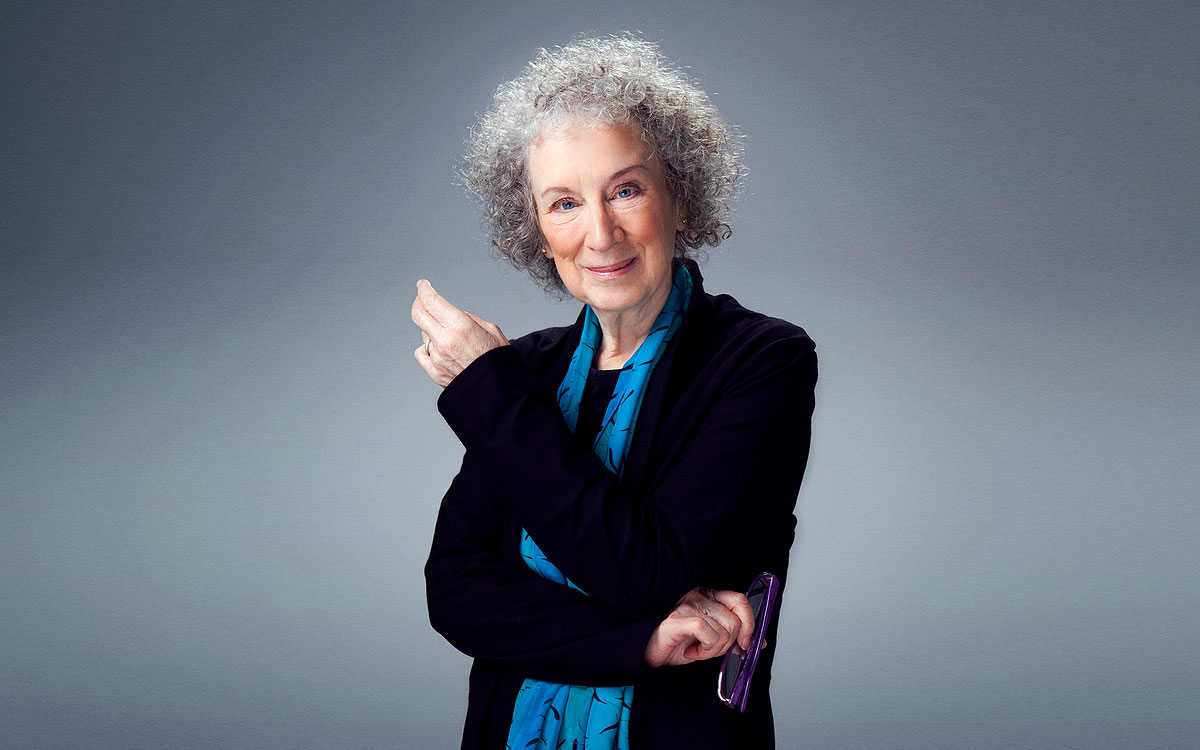 The Guardian calls the writer Margaret Atwood “literature’s digital doyenne.” The author of more than 40 books of fiction, poetry and critical essays, she’s a prolific Tweeter, with over 400,000 followers. Her fans engage her daily in online conversations about everything from biogenetic innovation to the worlds of her books, the future of storytelling, and the birds of her native Ontario. Atwood also experiments with new digital formats, working with British author Naomi Alderman to publish a serial zombie story on the community writing site Wattpad in 2012, and she has even designed hardware: in 2006, she invented the LongPen device to facilitate remote book signings around the world.

And today, we’re thrilled to unveil her new Flipboard magazine, MaddAddam’s World, which is a kind of companion piece to her latest novel, MaddAddam. That book concludes her speculative fiction trilogy about a post-apocalyptic world that began with 2003’s Oryx and Crake, which was shortlisted for the Man Booker Prize, and continued with 2009’s The Year of the Flood.

In addition to 1985’s iconic The Handmaid’s Tale, Atwood’s novels include Cat’s Eye, which was shortlisted for the Booker Prize; Alias Grace, which won the Giller Prize in Canada and the Premio Mondello in Italy; and The Blind Assassin, winner of the 2000 Booker Prize. Her work has been published in 35 countries, and she is the recipient of the Los Angeles Times Innovator’s Award.

We sat down with her recently to talk about her new Flipboard magazine—a fascinating collection of surreal news about real scientific innovations that could be straight out of her novels.

Check it out by tapping the cover below. 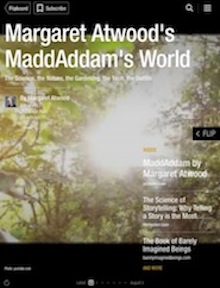 +++
The future you write about in the MaddAddam trilogy is terrifying, but scarier still is the fact that all the seemingly fantastic creations in these books have roots in the present day. Do you worry about the fate of the human race?
Does anybody not worry about our future unless they’re a mystic? Hands up—who isn’t worried? Maybe you think you’re going to be raptured up and everybody else is going to be destroyed, in which case I guess you’re not too worried. But just about everybody else knows that there’s a cutoff point. There is only so much we can keep taking—there is a finite planet, and some of it is renewable and some of it is not. We ought to be considering what we can do to help the renewable part.

There is a lot of conversation in the press about the danger of technology taking over our lives, but it hasn’t seemed to stop us from surging forward with advances in everything from biotechnology to wearable computers. Why do you think that is?
People are going to play with the toys. On the other hand, we’ve made a huge number of nuclear devices and we haven’t yet blown up the world. That’s a good way of looking at it.

One thing that comes up quite a bit in the media is the effect that this technology has on young people who are growing up in an age where it’s never been any other way. Do you think there’s validity to the fear that we could wind up raising a generation without the ability to make real human connections?
I’m not worried about that very much. We’ve had these stories every time a new technology is created. In the 19th century, people were very worried about trains, and they had nervous breakdowns having to do with the speed of trains. They were warned about bicycles, which would have several very bad effects including unbridled sex and even “bicycle face”—the speed with which you rode would pull your face back and it would stay that way. People were very upset about that. And of course we can’t forget all the things that were going to destroy the novel: movies, radio, television, and then the Internet. I can see no signs of that yet. There seem to be a lot of them out there.

One of the things the Internet does do is that it drives towards literacy. You have to be able to read and write to use it. And cheap cell phones have enabled information exchange in an unprecedented way. So you may not have a library or a bookstore or even a school, but most villages now have at least one cell phone. Farmers in remote areas can use it to track marketplaces; people are doing banking on their phones.

So, like always, doom and gloom on the one hand, but look how much the Internet is enabling a whole bunch of people to learn new things and get information that really helps their lives. That’s the good side. The bad side of course is that it leaks like a sieve, and everybody’s snooping on you all the time.

When you look at how reading and writing has changed during your career, what do you find to be the most exciting developments? What are you liking about current technology?
Any communication technology, even a book, is really a way of transporting voice from one place to another through time. And of course there are always new ways of doing that—now, you can post something on the Internet. You can write stories in serial form—that has really come back, having practically vanished into the domain of daytime soaps after a long run that really started with Dickens.

How you publish determines what you publish to a certain extent. So now we have sites like Byliner doing a lot of read-it-in-one go articles and short fiction and enabling serial publishing again. There’s Wattpad, a story-sharing site. Again, most people publish in serial form. A huge amount of fan fiction has found a home online. It’s not that there weren’t fan fic magazines before, but people produced them in small quantities in their cellars. The Internet changed that and created the opportunity for this kind of horizontal relationship between readers, rather than that traditional model of a writer’s work fanning outward to readers.

It’s just been announced that you’re working on a project that aims to reimagine Shakespeare’s The Tempest. How is that going?
So, forget the word “rewrite,” just expunge that from your thinking on this. Not a word of the immortal iambics shall be touched. Think instead of an exploration. Like The Penelopiad, where I did not change any piece of information connected with The Odyssey; I just imagined new stories from what was there. There are a lot of questions to work with: who is Calaban’s father, for example? How did his mother, Sycorax, wind up on that island in the first place?

You’re a well known Tweeter. What do you like about Twitter?
I like it because it’s short. (Laughs) Twitter is very interesting because people will organize themselves by their interests. My followers are intelligent, thoughtful, well-educated people—and it reaches so far. They have expertise in all kinds of areas. I posted a photo of a mushroom the other day, and I did get several mushroom jokes, but I also found out fairly quickly exactly what that mushroom is.

How has it changed your relationship with readers? It must turn the traditional idea of the book tour being the place you interact with your readers on its head.
One thing that’s happened with this most recent series is that I hear from a number of younger men on Twitter—and these are men who would never in their lives queue up for anything, but they’re reading these books and Twitter allows them a way to participate in the conversation.

Your Flipboard magazine “MaddAddam’s World” is full of real-life stories that seem straight out of your books. How difficult is it to find these examples in the news?
Not at all—keep in mind, I’ve been searching for these stories for years now, but they’re everywhere. There are a few that are really amazing, like the researchers who are growing human brains in a petri dish. That’s in the magazine—that one’s really quite terrifying. They look like little oysters.