On the Red Couch with Britt Aboutaleb and Julia Rubin, Editors at Racked 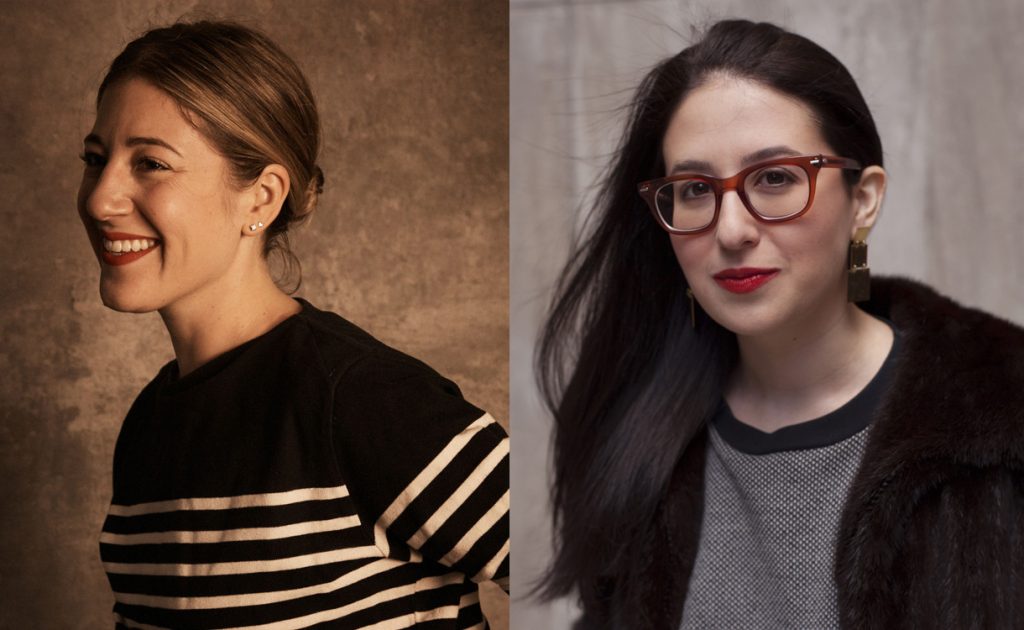 The retail and shopping site Racked turned 10 this year, and it looks like it’s having fun, even as it puts on its big girl pants. After a stint at Gawker, Lockhart Steele founded the site, as well as local real estate site Curbed and foodies site Eater, and sold the lot to Vox Media in 2013 for an undisclosed sum that was, reportedly, between $20-$30 million in cash and stock.

Twenty months ago, Britt Aboutaleb, a former Fashionista editor, was hired to be editor in chief, and was tasked with conforming Racked to the rest of the sites in Vox’s stable. We recently sat down with her and Executive Editor Julia Rubin, who edits the site’s longreads—yes, long-form journalism about retail can be smart, sophisticated and popular—to discuss all things Racked.

How did you go about re-defining what Racked is?
Britt: When I got here, it was a bit vague what Racked was. It was really important that we figured out what made a story a Racked story.

“Shopping for real life” is a thing we talked about quite a bit. I come from a fashion and beauty  background—I’ve worked at Elle, at Fashionista—and one thing I always wanted as a reader and as an editor was to talk about shopping the way the average woman talks about shopping: Why we spend money the way we do, how we spend it, how we should be spending it, what are the consequences of the money we spend, how we use beauty and fashion to promote who we are and our identity.

Now it’s really clear what Racked is about, where it sits in its space, which is really important. Eventually, we can branch out from there if we make our identity and purpose clear. But sometimes when you dabble in wellness, in fashion, with a little bit of runway, and a little bit of shopping, and a little bit of this, it can be hard to establish a brand’s identity.

How did you articulate what a Racked story is, and how did you share that with your team and then how do you stick to those parameters?
Britt: While I do think the future of brick and mortar retail is local, that didn’t make sense for internet coverage. So we ceased publishing to local sites to focus on Racked as a national brand.

And then, to get really narrow, we talked about “shopping for things that you’d put on your body.” I always said that eventually we’ll get to a place about shopping for the best iPhone case—but for now it’s really things you put on your body, which helped reporters and editors figure out “OK, is this a thing that feels Racked? And how do I kind of subvert that?”

Julia: The only requirement for Racked longform is that shopping, clothes, or beauty intersect with the piece in some way. Sometimes a piece is explicitly about one of these things, and sometimes they act as a frame or entry point for a story about something else, like the criminal justice system. We’ve been thinking a lot about topicality this year: Why does this story need to exist, and why now? 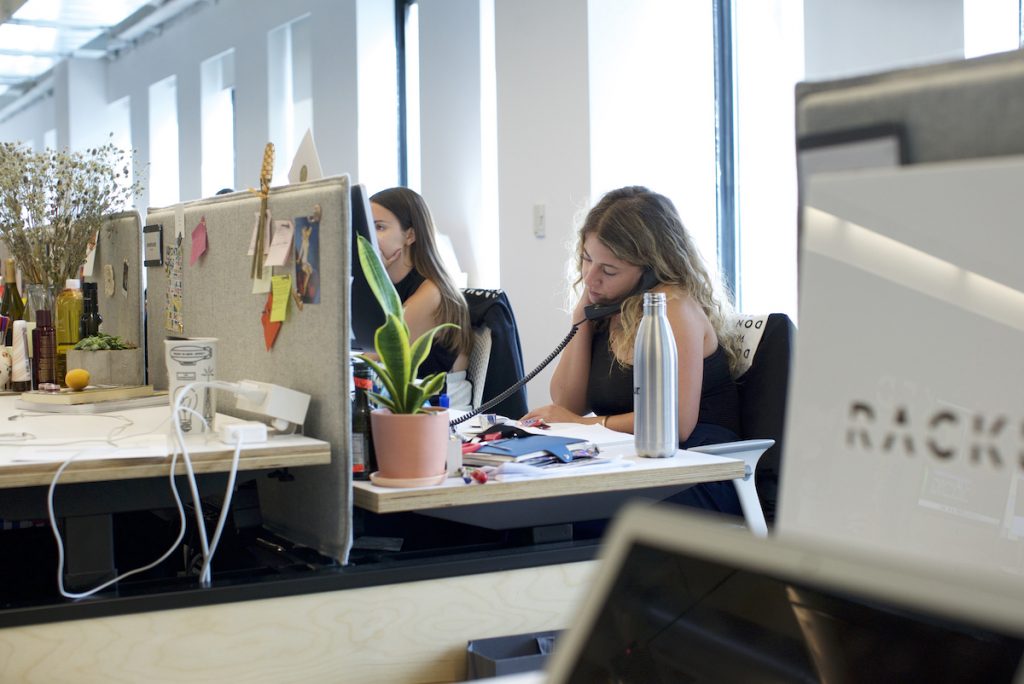 Aboutaleb on the phone inside the Racked office. Photo by Anthony Prince

What about longform storytelling? How does it play into your content strategy?
Julia: When Vox acquired the Curbed Network, the company already had a reputation for great longform, thanks to The Verge and SB Nation. Establishing longform programs at Racked, Curbed, and Eater was one of the ways Vox sought to level up those sites after the acquisition, and I was hired to lead that charge at Racked.

Racked had been doing great original reporting for years, which set it apart from its competitors who were still deep in the aggregation game. My job was to figure out what stories deserved more time, space, and resources. There are some stories that are best told in 5,000 words, just like there are some best told in 500 or 50.

Nobody else is publishing thousands of well-researched, beautifully written words about ear piercing. Our editorial strategy is to tell stories that aren’t being told, and to do so in smart, compelling ways — longform is one path to that.

How does the team track trends?
Britt: In August, our market editor, Tanisha Pina, said: “Trends don’t exist anymore.” We don’t really [track them]. We’re based in New York, and we do go to Fashion Week, so it’s not a thing we can really avoid, but we are more interested in “how can you be your best self?” If you’re interested in culottes, which continue to be trendy, and you think you can’t wear them, here’s a way that maybe you can wear them. But you don’t have to wear them…if you just wanna buy a pair of skinny jeans, we’re also going to give you “10 best jeans to buy right now.” So constantly working on what we want is really helpful. 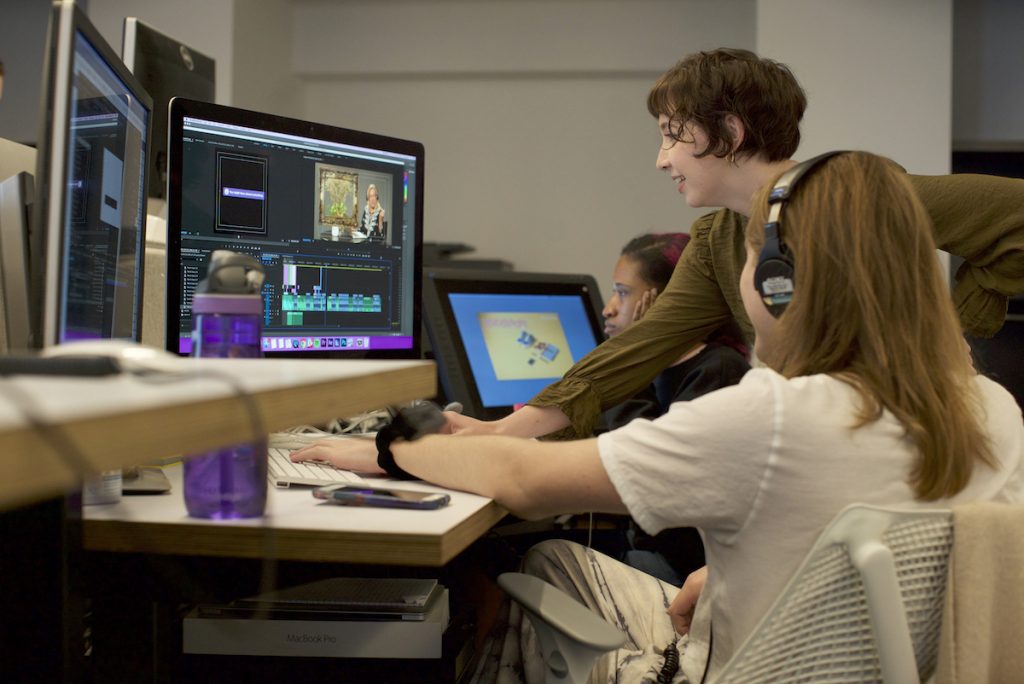 Where do you like to shop?
Britt: I like to buy vintage, but vintage men’s, because I don’t have a vintage woman’s body (not much of a waist). I recently bought a pair of white Doc at the Doc Marten store, which I’m wearing with long floral dresses (Zara!) and chunky knit sweaters (Dôen!)—finally living out my ‘Drew Barrymore in the ’90s’ dream!” I actually, against all odds, do love to shop at department stores.

Do you have a favorite story that Racked has done?
Britt: In November, we published our biggest editorial effort, “The Swag Project.” A collection of pieces exploring the economy of free stuff received by reporters and editors in the lifestyle space, the brilliant idea was spearheaded by our senior editor Meredith Haggerty after a stellar pitch from reporter Eliza Brooke, and I am pretty sure that every single person on the team contributed in some way. So that’s a favorite!

Would also shout out Rebecca Jennings‘ Bachelor content—she judges each contestant based on their shirt and it’s consistently the funniest thing I’ve ever read (and I don’t even watch the show). Super proud, of course, of our longform investigation into Trump’s factories in China, and a more recent critical look by Amanda Mull at fashion’s most innovative companies failing to innovate around sizing.

Julia: Spencer Woodman, an investigative reporter who had done some fact-checking for us, pitched the idea and I was immediately sold. We sent him to China to track down the factories during the last months of the campaign. The timing was right, but the piece also tells a more evergreen story about how it’s so difficult to know who is making your clothes and under what conditions.

Also, Stephie Plante‘s story about the Unclaimed Baggage Center and Helen Rosner’s story about the world’s longest yard sale are both so moving and gorgeously executed. Kyle Chayka‘s post-inauguration meditation on the color gray really resonated with people. Jamie Keiles’s recent piece on nudists is incredibly fun to read, as is Eliza Brooke on the French girl myth. Chavie Lieber does some of the best business reporting around.

What’s next for you and for Racked?
Britt: I think that we’ve unlocked the growth that we’ve been looking for; we’re feeling the momentum and buzz, and trying to take advantage of that. We’re pushing forward with a robust cross-platform video program, under the leadership of our executive producer Lauren Sofair, who’s interested in translating our reporting and storytelling on screen.

I think it’d be fun to start thinking about a different medium—maybe a podcast. We’re focused on telling the kinds of stories that only Racked can, diving deeper into the things we cover and publishing across all platforms.