On the Red Couch with Cinemagraph Co-Founder Kevin Burg 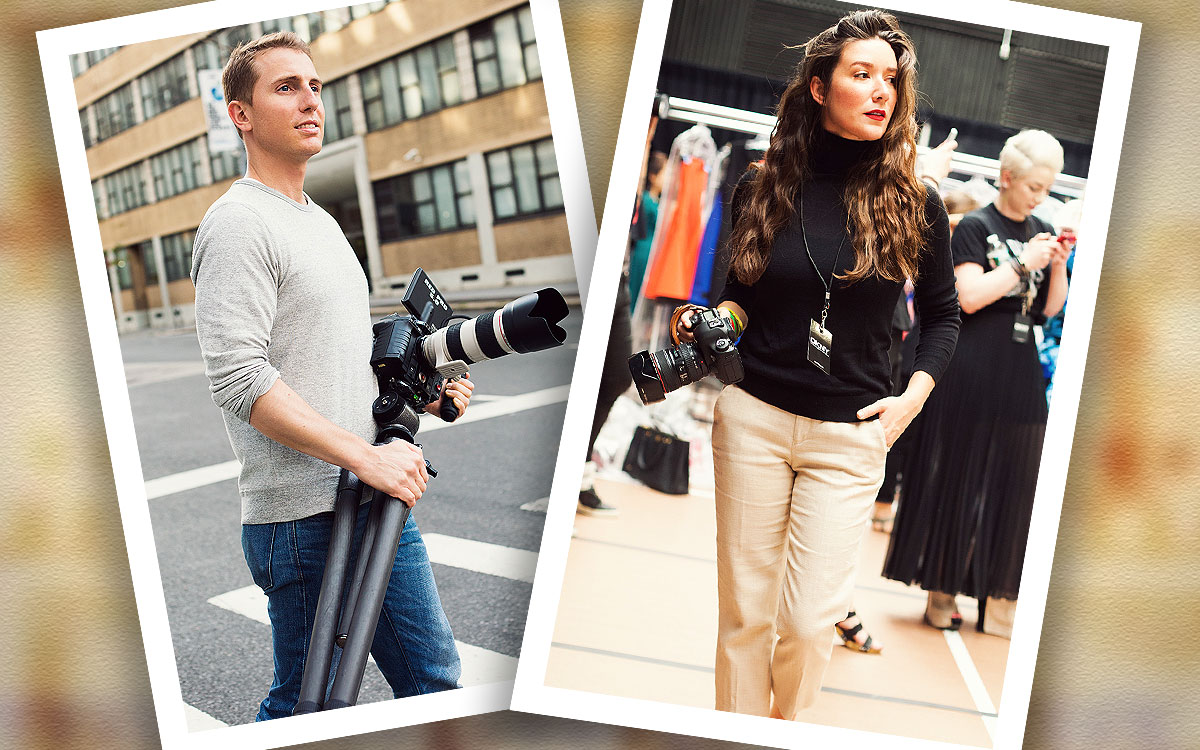 Kevin Burg remembers his first animated GIF. He was in high school and it was the 1990s—a time when the Internet was littered with infinite loops of dancing babies, blinking lights and fake fireplaces. Burg contributed to the new art form with his very own 3D spinning cube. He says it wasn’t much, but it was a start.

Years later, the loop continues. Burg is the co-creator of the Cinemagraph, a kind of GIF that infinitely plays subtle animations over a still photograph. It’s mesmerizing and would’ve never happened if not for Tumblr’s file size limit on images. To keep the files small, Burg chose to highlight a small animation in each image, giving birth to the Cinemagraph.

“It was something completely new,” Burg recalls, who along with his wife, Jamie Beck, started posting the GIFs to Tumblr after a 2011 New York Fashion Week shoot. They were a hit. “They resonated with people because these Cinemagraphs had the power of a still image along with the extra story element of motion,” said Burg, a graphic designer.

Burg and Beck’s creation has played a role in the latest GIF renaissance: the two were interviewed by PBS for a short documentary on the medium and they’ve done commercial work for Ralph Lauren, Saks Fifth Avenue and Samsung.

Burg chatted with Flipboard about all these “infinite loops,” how the Cinemagraph got its name, and how much one is worth.

What got you interested in the world of animation?
I always saw the potential the computer could have for animation and art. As a kid, I remember being inspired by stuff like Toy Story and A Bug’s Life. It was this amazing world that changed every year and would rapidly improve. I’ve held that interest as I continue to work on jobs and graphic design.

What was appealing about GIFs?
It was about the possibility of creating something digital that you could share and have other people experience. It was really a cross between technology and the Internet for me. And then Tumblr came along, which was fundamental because it provided a home and an audience for GIFs.

What was your first Cinemagraph?

It could be considered a really crude Cinemagraph, but there is a picture of New York City street that I call “Living City.” I shot it with my iPhone out of a high rise. I saw cars going by and I froze different areas and allowed animation in others with the idea that the city is always living. The ability to capture that with both a moving and still image led to what was ahead.

How did they take off?
Jamie [a blogger] was covering New York Fashion Week and we had just gotten the Canon 5D Mark II. It was a photography camera that could also shoot video, so we wanted to do something with video. But we didn’t want to do a retrospective “This Was Fashion Week” piece.

So we had the idea of doing a slideshow of GIFs, the kind that puts a bunch of pictures together where it moved like a flipbook, where the motion wasn’t exactly smooth. Jamie began posting them on Tumblr and immediately there was huge feedback. People would re-blog it and leave comments like “I can’t stop staring at this.”

We immediately knew there was some potential because we felt there was a new photographic medium that was getting massively popular online.

We were working on a fashion shoot for a magazine and the word Cinemagraph just came up, and it just worked. It seemed to capture the romance and dramatic element and resonated with everyone in an emotional way.

Where do Cinemagraphs fall in the ecosystem of the Web?
I think we’re still trying to achieve some clarity on that. We have an idea of how they can be used. You can tell a story, a mini movement and bring something to life. Cinemagraphs ultimately were a response to the oversaturation of video on the Web. We wanted to quiet that down along with the flashy GIFs of the past. We were going with something more quiet and subtle.

Photography has always been about capturing the moment. What do Cinemagraphs add to the moment?
It’s about taking the elegance of a still photo and telling a deeper story. It’s about freezing time. I think a good example is a couple we stumbled upon in Paris. They’re sitting by the river and are kissing. They had this moment that was real and authentic.

As a photo, it’s just them kissing. Maybe it’s pretty, but beyond that, what does it say?

With a Cinemagraph, it lives forever. You can watch them kiss, the moment they look at one another, when they embrace and pull apart. You’re sort of taken on this ride with video that captures the whole moment.

How do you find that moment to infinitely loop?
It should be something that really captures your eye and should have a meaning and purpose; otherwise it doesn’t need to be moving. Just because you can loop something doesn’t mean you should for the sake of it.

What’s your stance on the pronunciation of GIF?
The guy who invented the format calls it GIF (pronounced jif). I trust the guy who created it. It’s good enough for me.

If a picture is worth a thousand words, what is a Cinemagraph worth?
A novel.

You can flip through Burg’s Tumblr on Flipboard or get lost in the world of GIFs by flipping through some of the magazines below. 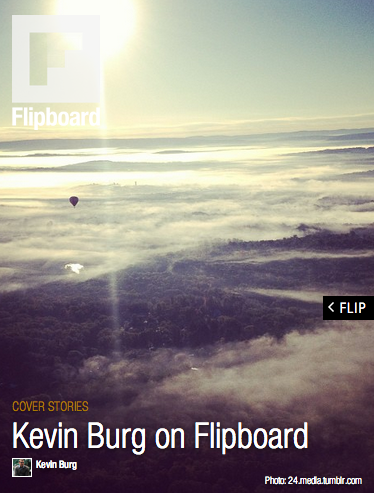 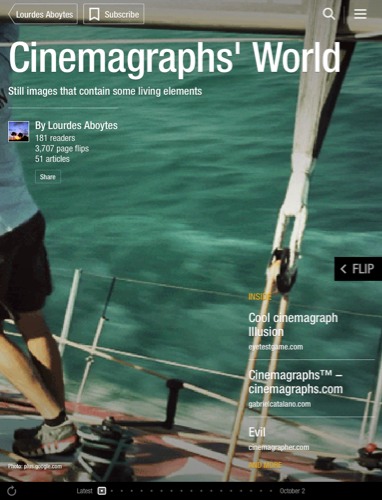 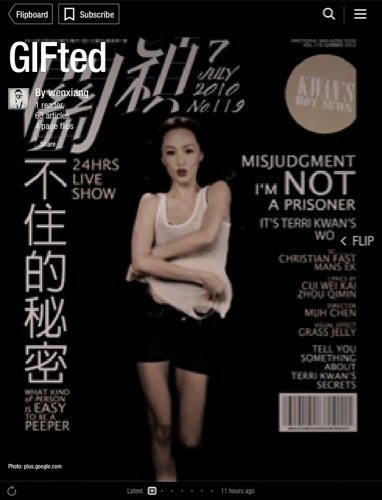 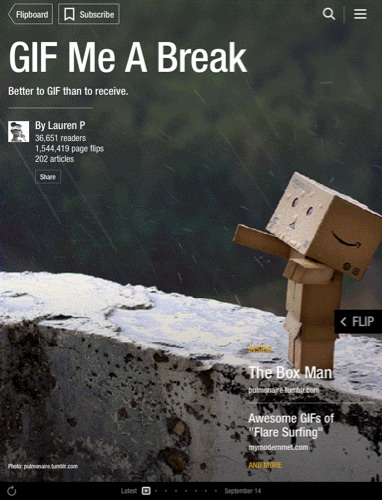 GIF Me a Break: by Lauren P.