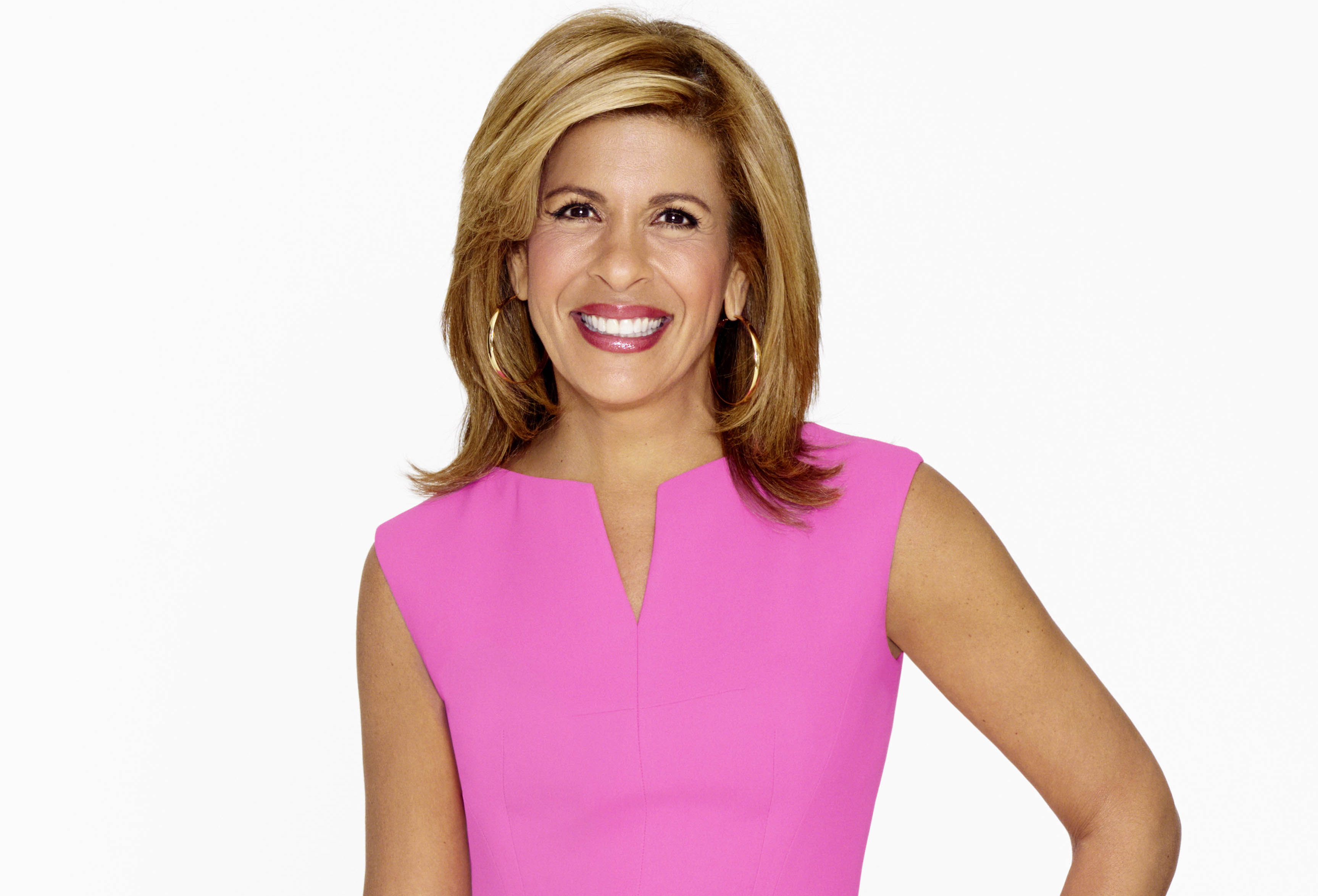 Today Show host and author Hoda Kotb is an advocate for NBC’s “Season of Kindness” initiative that encourages and celebrates altruism and humanity in everyone from Taylor Swift to the 12-year-old boy who’s collecting hats for young cancer patients. In our conversation with Kotb, she shared the stories that touched her this season and offered up her tips for happiness during the holidays and the year ahead.

Read all of the inspiring stories from this year’s Kindness initiative in NBC’s Flipboard Magazine.

Can you explain what the “Season of Kindness” initiative is and why it’s important to you?
I think we often get caught up in our own private Idaho. You just try to get through the days and make sure everything works out OK in your own private world, and you realize you haven’t done something for someone else. I was watching one of those TED Talks online when I was at the gym one day and they said do five things that will make you a happy person: write down three things you’re grateful for, write down something great that happened that day, pray or meditate and exercise, and the last thing was do one random act of kindness. I remember thinking that’s one of those things that sometimes you can go a whole day, and because you do things for your husband or your family or your boyfriend, your kids, you feel like you’ve done it.

But I was reminded of it when I was getting in the elevator in my building several months ago. I just hopped in and there was this girl in there that had on a weird wintery hat, like Oscar the Grouch with eyes. She had cupcakes in her hand, and I said, “Oh my God, what are those?” She said, “They’re cupcakes.” I said, “What kind?” She said, “They’re salted caramel.” I go, “Oh my God, salted caramel.” I was just oohing and ahing. She hopped out of the elevator at a floor before mine, I said goodbye and that was it. I thought that was a nice moment in the elevator. The next day I go to work and on my way back into my building I walk past the doorman. He says, “I have something for you.” There was a box with cupcakes in it, and there was a note on top that said “Hi. I was the one wearing the Oscar the Grouch hat in the elevator. You were admiring my cupcakes and unfortunately they were all spoken for. I had a little extra time today, so I went to Brooklyn and picked up some for you.”

I almost started crying. It just reminded me of how a stranger’s kindness can change the way you feel that day. I thought the Season of Kindness just seemed so appropriate because it gets you out of your own head and your own shell and your own whatever, and it just sort of changes your outlook. You can change someone’s day–she changed mine. It makes you want to do things to change other people’s days too.

Is there a story you’ve heard during this season of kindness that has really stuck with you?
There are so my great, kind, amazing people. There’s this girl named Orly [Wahba, founder of Life Vest Inside] who has literally made it her life’s mission and kind of her job even to spread kindness. You’ve seen the commercials and she also did a viral video that showed one person holding the door for someone and that person looks back, notices someone’s holding the door for them, sees the person in front of them has dropped a piece of paper, they pick up the piece of paper and hand it to them and it goes on and on and on. I think her kindness, when you can turn your passion into a profession, really turn it into something big–she’s done that.

Part of the initiative is sending a positive message. What’s your advice to stay positive during the holidays and throughout the year?
When you feel really crummy, there’s only one way to get yourself out of the hole. It’s to help someone who needs it more than you do. I think that’s probably the best advice. If you stay trapped in your head with your own issues and your own problems, it’s just not a good place to be.

I knew a man once who told me this story. His cousin was in a car crash. She was a young girl; I think she was 10 years old. The girl lived but she lost the use of her legs and she was in the hospital, and she had a private room. The doctor told the parents he thought it would be better if she moved into a room with other kids. They said they talked to their daughter and the daughter said, “Leave me alone.” They let her be. A couple of days later, the doctor said, “I’m telling you, please try to get your daughter in a room with other kids.” They tried again and she said no again–she said, “Just let me have this, I have nothing left.” And finally the doctor insisted and the parents said, “OK, we’ll put her in with another kid.” She was very upset. So they’re in the room together, she and another kid and the other kid says to her from his hospital bed, “Can you help me?” She says, “What do you want?” And he said, “Can you push the button? I need a nurse.” And she said, “I can’t push the button–I don’t have the use of my legs.” And he said, “Well, I don’t have the use of my arms or my legs.”

The girl hoisted herself up into that wheelchair by her bed, wheeled over and pushed the button. She ended up becoming an attorney for people who are disabled. She became a lawyer because she found her passion. But it just shows you–when you feel like you have the worst possible hand dealt to you, there’s someone who has a worse one who needs your help. And I think that changes everything–then you have a purpose.

Did your new book, Where We Belong, change how you think about positivity and fulfillment?
I think it just enlightened my opinions. You know when things reaffirm–these people found where they belong in life. They’re now in the right job, with the right partner, doing the right thing. They’re following the path they were probably always destined to be on. I think it just reminded me that no matter what your income level, no matter what your situation is, you can make a turn and get on the right path for yourself. These people showed it.

Who’s the kindest person you know?
Karen Swensen. She’s my best friend in the world. She does kindness in a way that is different than most, I think. She never tells you when she does it. She just does it. We were having dinner, me and my boyfriend and she and her husband, in New Orleans. There was this table of army vets sitting at a table. I watched her get up, and I watched her hand her credit card to the waitress and whisper to her, and I watched her come back to our table. I looked at Karen, and then I watched the waitress go over to that table and say, “Somebody has taken care of your check.” They said, “Who?” and the waitress said, “The person doesn’t want you to know, but they just wanted to say thank you.” And I looked at Karen and I said, “You did that, that was you.” And she goes, “I don’t know.”

She never wants credit. She’s that type of person, which takes kindness to another level. It’s like what do you do when no one’s watching? That’s how she lives her life. When I was sick she was the person who was amazing to me. It’s in her blood. She probably does 10 kind things every single day and wouldn’t tell a soul.

Read about those across the country who are paying it forward, in NBC’s “Season of Kindness” Flipboard Magazine. 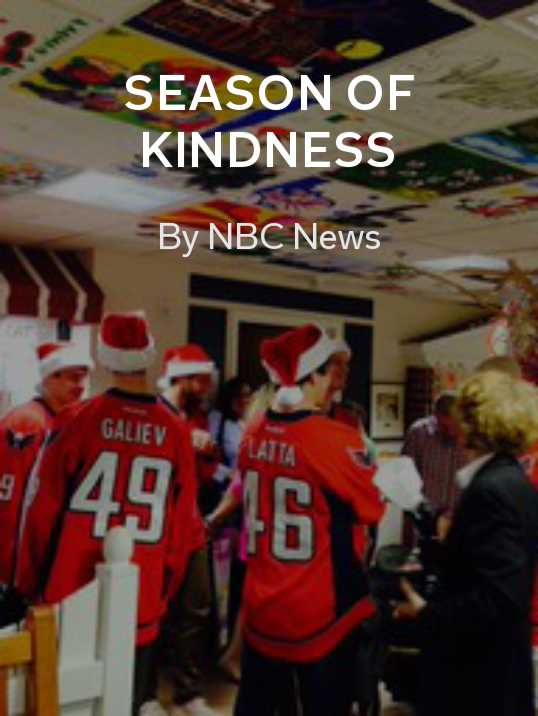