On the Red Couch with Journalist Lola Adesioye 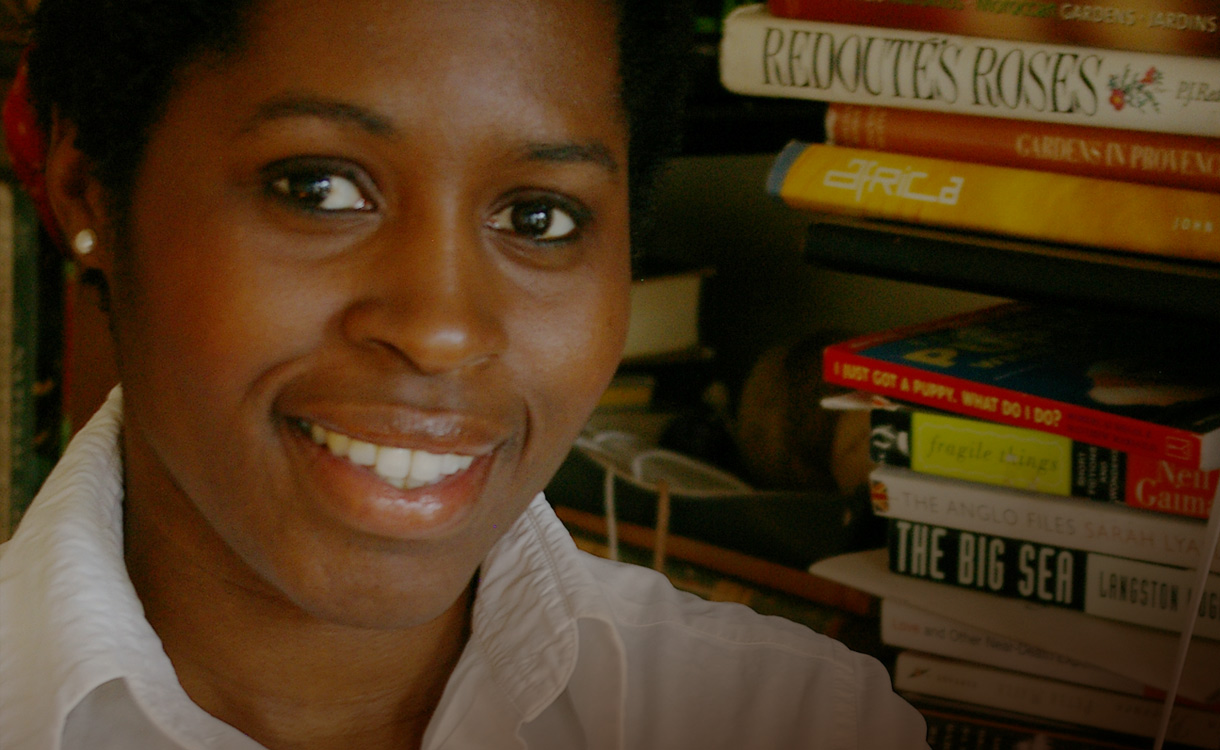 Lola Adesioye came upon an Obama rally in her first few months living in New York City in 2007 and, upon seeing a presidential candidate of color, she knew she wanted to become part of the narrative of American culture and politics at that moment and beyond. She started writing about what she was experiencing and seeing as an ‘outsider’ in NYC. A British-born, Cambridge-educated woman of Nigerian descent, Adesioye could offer perspectives that bridged U.K., U.S. and African society. Her grandfather, Ebun Adesioye, was a pioneer of journalism and PR in Nigeria, so you could say she’s had this drive to tell stories in her blood.

To this day, Adesioye’s contributed to The Guardian, CNN, BBC, The Atlantic, Forbes Africa, The New Statesman and The Economist, among other titles, and speaks regularly on TV and radio. She was one of the founding editors of NBC’s African-American news site, TheGrio, and was a Contributing Editor for AOL Black Voices before it became Huffington Post Black Voices. Now she’s the proprietress of the Adesioye Agency offering trends and cultural analysis and insights for clients looking to better understand the ‘shifting dynamics of 21st century life.’

Oh yeah, she’s also been named one of “11 black commentators you should be following“—so follow her, we did, to learn more about what it’s like being a storyteller with many homes.

How do you think your coverage as a non-American might be different from someone writing about the same thing who is American?
When you are from another place, you see things with different eyes and you have something to compare it to. There are aspects of American society and culture that I think definitely need improvement, and there are aspects of British culture and society that could benefit from some of the things America does well. My parents are Nigerian immigrants, so I’ve always had an insider-outsider status in whatever country I’ve been in, which gives me a unique angle with which to look at things.

What kinds of differences have you noticed with regards to race relations in the U.K. and in the U.S.?
I would say that both societies are institutionally racist, on a structural and systematic level. However, Brits talk less about racism and have more of an aversion to openly discussing it than Americans do, and—I find—are less honest about the effects and impact of racism in British life.

Racism in the U.K. has been a lot more covert in recent years than it was in the 80s, for example, although the Brexit decision appears to have empowered some people to be more openly racist. (A study earlier this year showed that one in three black, Asian and ethnic minority people had been racially abused since the Brexit vote took place and that hate crimes have increased massively.)

In the U.K., there is also an interesting intersection between race and class, which is different from in the U.S. I would argue that the class system in Britain is a lot more rigid and much harder to penetrate than it is in the U.S., for a variety of reasons. Social mobility is hard enough as it is in the U.K., even for white Brits, but adding race/ethnicity into the mix adds a more complicated dimension to that.

The deeper I delve into American history, the more disturbed I am to see just how much of a concerted effort has been made over time to keep African-Americans from accessing, enjoying and benefitting from mainstream American society. I do think that there has been a lot of progress made in a relatively short period of time (after all, the civil rights movement was not that long ago in the grand scheme of human history), but some of those age-old discriminatory and prejudicial attitudes are ongoing. Take, for example, the fact that African Americans who commit the same federal crimes as white Americans receive prison sentences which are nearly 20% longer (just one very small example of discrimination/prejudice at work within the criminal justice system). Or that minority children in schools all across the nation receive substandard education, face harsher discipline in schools and have to deal with more inexperienced and less well-paid teachers, which puts them at a disadvantage from an early age. Or that black Americans who are shot and killed by police are twice as likely to be unarmed than white civilians. Or that past and previous policies and practices continue to maintain a racial wealth gap. The list goes on, and I would say that underpinning all of these glaring disparities I have just outlined is a lingering negative notion about black people and their place in American society.

On the other hand, having had an African-American president is something which America should be very proud of. Although President Obama’s presidency certainly did not usher in a “post-racial” America, I see that younger generations are less concerned with some of the concepts that older people are/were; they mix more across cultures and ethnicities and don’t carry such negative and prejudicial attitudes. Shifts in music and culture have something to do with this, I believe.

I’m not sure if we’d see the U.K. having a prime minister of color anytime soon. At the same time, however, the U.K. has had two female prime ministers (bear in mind that Margaret Thatcher was elected in the 70s!), while the U.S. has not yet had its first female president.

The U.S. has some deep issues, but one thing I like about America is that people confront things and look at things [head on], whereas the British are a bit more reluctant to point out their own flaws.

As a writer, I try to look at who my audience is, how they might receive what I’m trying to say, as well as how best to frame and convey my position and point of view so that it is received and understood in the manner in which I intend it: which is usually to provoke thought and discussion, as well as to express my particular perspective on an issue. Content-wise, if you’re writing for an African-American audience or a black audience, there are things that might be of specific interest to that audience which might not be of interest to your average Guardian reader, for example. You can get a bit deeper into specific issues affecting those communities without some of the backlash, misunderstanding or disinterest that you may get for writing about them in publications which are aimed at a predominantly white audience. Other than that, I write as best as I can for whoever I write for.

Is anyone telling the positive stories of race relations?
Yes, there are positive stories! People live next door to each other, they get on with each other, and there’s some harmony. I do think sometimes in the climate we’re living in, it is very easy to be either/or about things and for things to be polarized. Are there people in the community that are happy about gentrification and think it’s a good thing? Is gentrification always bad? Is it something that is somewhat inevitable? Where have we seen it before? Are people experiencing good things? I like to look at best practices and what works. I don’t think there’s enough of that in writing and in media because it’s very easy to look at what’s not working.

Can you talk a little bit about what those best practices are, and how people who want to diversify and expand their world can go about doing that?
A best practice in any area is where there has been success. For some reason, human beings tend to have this bias towards spotting what’s bad, but it’s harder sometimes to spot what’s good. Looking at African-American education, for example: schools generally tend to fail African-Americans more than other groups, but what about the schools where the kids are thriving? What’s happening there? What are the resources being invested? What do the teachers do differently? How can that be replicated? As a writer and someone in the media, my goal is not just to talk about what’s going on, but to look at how to make things better.

How do you think the stories of Africa are being told in our media?
The stories that are told give a very skewed perspective about Africa. Africans are very dynamic people, very entrepreneurial, and very concerned with family and community. Generally what you hear in the media is famine, war and awful things, [so] if you had never been to Africa and you only got your information from the news, you would never want to go. There’s no talk about the beauty, about the beaches, about the vegetation, the natural resources that are available, the wonderful people, or the tribes. It’s a rich, rich, continent in terms of human capital and culture.

Where and how can people go to get a better understanding of black culture outside of America?
You really have to search for it, and that’s something that I’ve been working on. I’m looking to start my own platform dedicated to painting a global view of black culture: Africans in Africa, diasporic Africans, African-Americans, black Britons, and so on. I think the internet gives us the opportunity to present ourselves as international people in one space to address issues, but also to look at the positive side—the people that are doing well and innovation that’s happening.

In terms of journalists, whose work do you admire?
Gary Younge, who writes for The Guardian, is a brilliant writer. It’s always coherent, always illuminating and very thoughtful. The Atlantic, I really like—David Frum and Ta-Nehisi Coates is someone I really admire for his depth. I read The New York Times—Charles Blow. I respect them all for their opinions and their views.

And which books do you think should be on every white person’s reading list?
For fiction, people like Chimamanda Ngozi Adichie—her book Americanah gives a contemporary understanding of what it’s like to be a young African woman living in America. I’d also add: Ben Okri – The Famished Road; Chinua Achebe – Things Fall Apart (a true classic); Thomas Pakenham – The Scramble for Africa; Adam Hochschild – King Leopold’s Ghost; Andre Brink – A Dry White Season (fiction set in South Africa during apartheid); books by Dambisa Moyo, who is an excellent thinker on contemporary Africa; and Trevor Noah’s Born a Crime, which is a fun but insightful read. I’m aware that my reading list skews more towards Nigerian/West Africa but that there are obviously writers from all over the continent that everyone should read.