On the Red Couch with Man Repeller President Kate Barnett 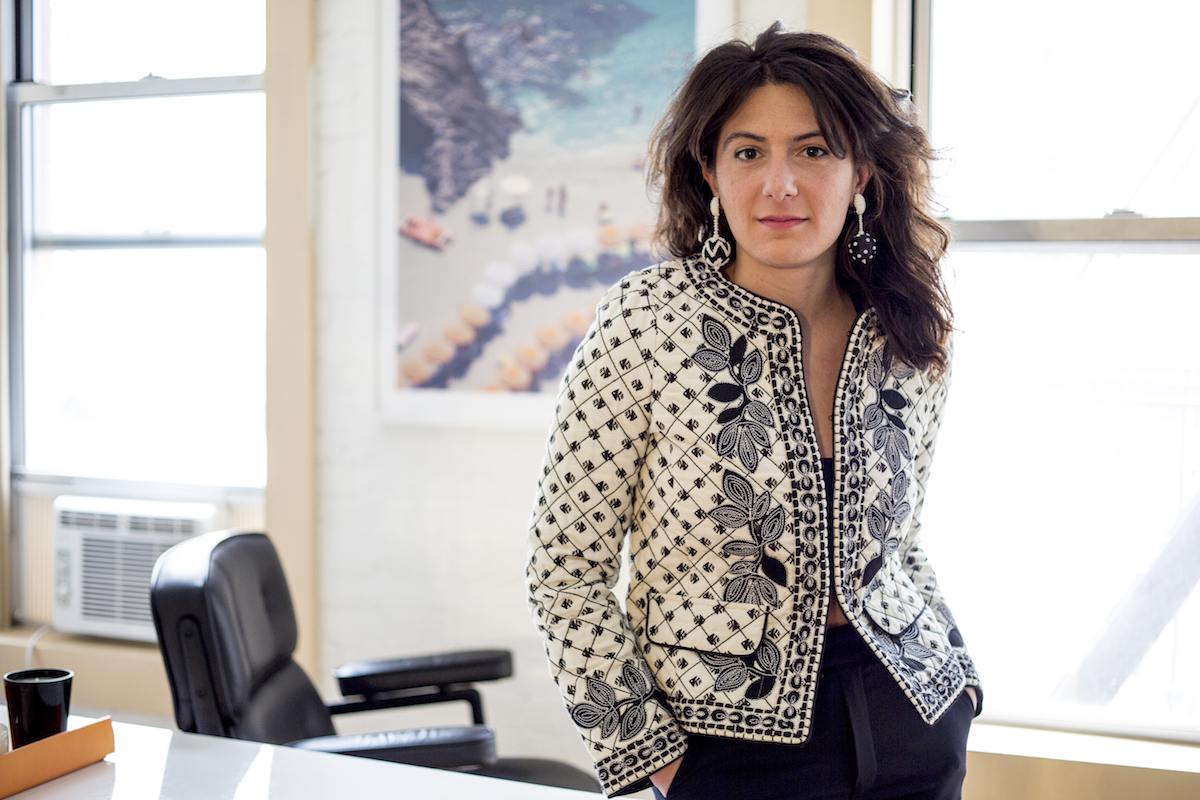 I remember when I first heard of the blog Man Repeller. To me, the name was so outrageous—and so funny—that I knew I needed to check it out. What I found there was a fashion site infused with humor, inextricably linked to the wit and personality of founder Leandra Medine. In seven years, Medine and her team have transitioned her one-woman platform into a global community and 20-person company with a mission: helping women find their true voice and pursue whatever feels best and right for them (screw anyone who says otherwise!).

I had to learn more about the inner workings of Man Repeller. On a chilly December day, Kate Barnett, its president, agreed to meet me at its HQ on the Lower East Side of Manhattan. A transplant from New Mexico, Barnett brings an earthy composure and feminist vision to her role overseeing Man Repeller’s growth, which she’s done since 2016 (though she’s been with the company since 2011). Her down-to-earth nature powers her personal interests, too—just ask her about adobe restoration, tinctures and mushroom powder. In other words, Barnett is an executive of her own making—which, at Man Repeller, is the only way to be.

I love the name “Man Repeller.” What does the name signify for the people who work here?
The name has like a very clear story. Leandra was shopping with friends and she was sort of seeing three guys at the time. None of them were actually interested in dating her, and she was talking to her friends about it. They were like, “Well look at how you dress! You’re a man repeller.” And she said: “Excellent! That’s the name of my new blog.” Now it’s much more centered on finding whatever path for creative expression that’s true to you and not having it be laid out for you in any way by other people.

How do you do that? And how do you inspire without telling?
It’s largely by example. As the founder and sole writer for two years, who Leandra is sort of embedded itself in the core of Man Repeller. She’s somebody who wears her heart on her sleeve. She can’t help but say what she’s thinking and share how she’s feeling, and I think that has largely set the tone for us in making sure that what we publish feels real and honest.

One of the things that’s most important to us is the relationship we have with our audience. In our comments section, there’s thoughtful discourse in a way that’s really unusual. So we’re constantly trying to figure out how we can create more space for it…Since September we’ve had ‘micro-community’ events of just 20 people so we can get to know the members of our community and foster the same relationship we have online, offline.

We’re constantly trying to embolden [our readers] in any way that we can—whether it’s providing opportunities to write on the site or highlighting a number of different successful women. The more unique stories that we can share of women finding their path to being comfortable, the better we can reach our audience.

How can women support other women on that path?
That’s something I’m still figuring out and just starting to appreciate. Most of the people in my life that I think of as mentors in work have been men. And just now—I’m 32—I’m starting to create this community of women who support me and my work, and I can support them, and it doesn’t feel cheesy or disingenuous or too network-y.

Mentorship is incredibly important; creating that community for yourself can be really difficult. I would love to build a way to pair women or bring groups of women together to offer that sort of support. Now that I am in a phase of my career where I have the opportunity to offer advice to women, there’s nothing that I do that feels as fulfilling as being able to help somebody understand the opportunities available to them and help them get where they want to be.

Can you talk a little about your content strategy at Man Repeller? You publish six to eight posts per day, which sounds like a lot but it’s also more measured than other sites.
Two and a half years ago, our Deputy Editor Amelia Diamond came on as our first full-time writer outside of Leandra. It was very much a conscious decision that Man Repeller could and should be more than just Leandra’s voice. But everybody was a little nervous about how the audience might react to a different person writing for the same site.

But the community embraced Amelia with open arms, unsurprisingly, because she’s an amazing writer. She’s very funny. Leandra has had the sense that she wants Man Repeller to exist for her grandkids and to be a resource that she didn’t have when she was 13, that her mom didn’t have when she was 30. So we’ve continued to grow and add to the writing staff, and we have contributors, but it’s been in a very measured way. The idea of having, like, 500 contributors and 50 stories a day is not something that’s interesting to us.

Still, it was grind to get those pieces out. And so, last August, we hired Leslie Price from Vox as our Editorial Director, and she’s helped us map out our content strategy and focus on the balance between fashion, humor, relationships, think pieces, as well as creating the opportunity for us to do some longform. It’s something that we’re constantly working on.

I love the humor inherent in the Man Repeller brand. When I listened to Leandra’s audiobook on my commute, I would laugh out loud in the car. Where do you guys find humor, and how does that translate to the site?
As much as we are a serious writers’ room, there are also endless opportunities for joy. Writing humor is really difficult and it’s really difficult to say, ‘Here’s a topic. Make it funny.’ I think part of ensuring we can do that goes back to hiring, but also giving writers the freedom to be as weird as they want and can be. It’s definitely a core and important piece of the site.

What are your passions? What do you do outside of work?
Actually, until last year, I was living in very rural New Mexico working remotely, and I would fly to New York for a week a month and then for a couple months during the year because my now-fiancé was an organic farmer and then an adobe builder. Which was wonderful, but the company was growing to the extent that I felt like I needed to be here or get out of the way. And as much as it was a tough decision, it was an easy decision. I don’t know that I’ll have the opportunity to work with a company like this at this stage in its growth again in my career. But, in living in rural New Mexico, I had my group of wise women that I would do chi-gong with, that I would garden with, and that I would make tinctures with. And all that has carried over, which is why my water is green…

Yeah, what is that?!
(Laughs) It’s chlorophyll water. Whether it’s responsible or not—and it’s probably irresponsible—I’m still the one that hears people sniffling and is like, ‘What’s going on with you?’ The next day I’ll come in with a sachet of things to steam for their herbal steam bath.

When I asked our Editorial Director what my hobbies are and she said ‘smoothies.’ I started making warm smoothies in the morning and they’re, like, mixed mushroom powder and cacao and everything to make your brain as active (without making you anxious) as possible. Last week, I brought in a massive Thermos for the team.

What’s on your to-do list for 2017?
Before we moved to New York City, we bought a broken down adobe outside of Santa Fe. So at some point, I’ll probably go and help start restoring that a little bit. I also have this goal to climb a fourteener—a mountain that’s 14,000 feet—so I would like to do that.  (Laughs) In this past year, I became really good about sleep hygiene, and so my life with eight hours of sleep is very, very different than my life with six hours of sleep, or four hours of sleep.

Finally, what’s the best career advice you’ve received?
It was from my grandmother who worked on Capitol Hill. She was Tip O’Neill’s secretary for decades while she was raising three kids by herself. In my late teens, I was talking about different jobs that I wanted in the summer, not necessarily with a sense of entitlement, but with a ‘I deserve to do this, this, and that.” And my grandmother said: ‘Most people don’t get to enjoy the job that they do. That’s a luxury. Be aware of that and be appreciative.’ That really stuck with me, to remember how fortunate I am to be doing a job that I love and to be able to work for a company that stands for something.