On the Red Couch with Marie Claire EIC Anne Fulenwider 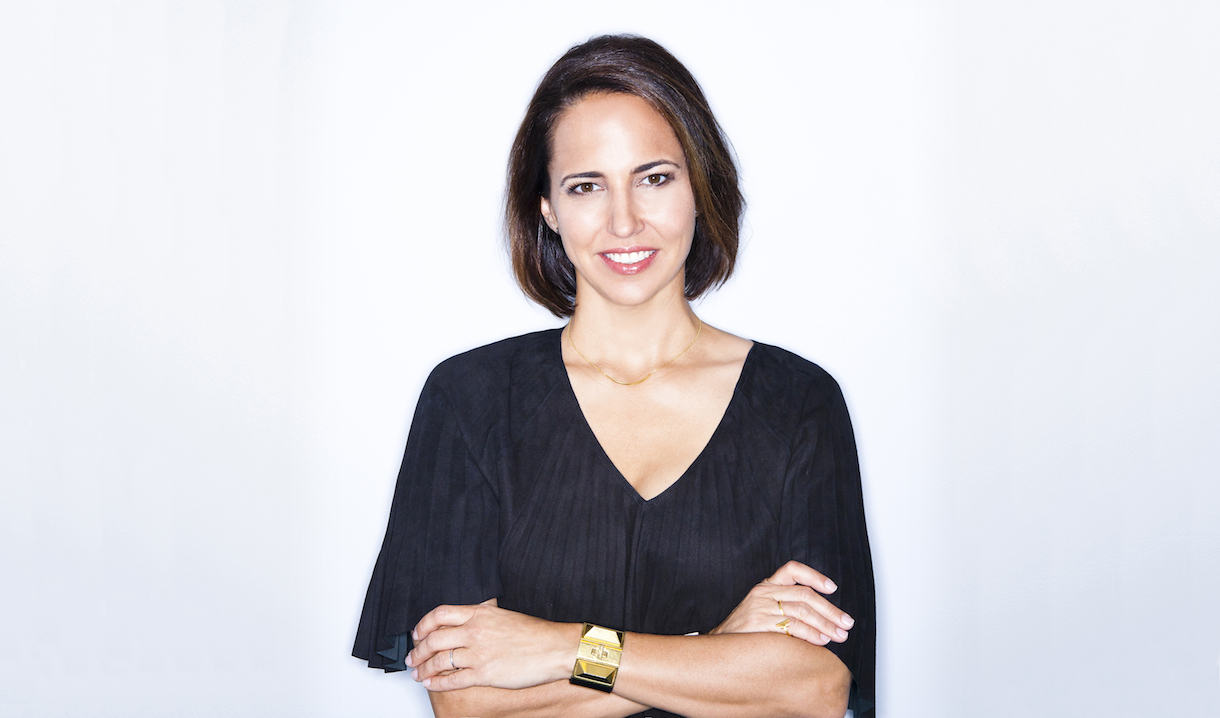 Is the life of a fashion editor all front-row seats and Instagram perfection? Well, yes and no, as Marie Claire U.S.’s editor-in-chief Anne Fulenwider told us. Yes, it’s glamorous, but it also means “putting your hair back in a ponytail, rolling up your sleeves, editing stories, and meeting with your team and collaborating.”

Fulenwider, who recently sat down with us to discuss what it’s like to edit the internationally influential monthly, says no day is the same at the “the thinking woman’s fashion magazine.” In addition to covering fashion, beauty and celebrity news, Marie Claire also offers career advice, political stories and spotlights on the women who are trying to make a difference in the world.

Marie Claire’s editor since 2012, Fulenwider has also served as the editor in chief of Brides, the senior editor at Vanity Fair who launched the Fanfair section of the magazine in 2000, and senior editor at The Paris Review, where she was also George Plimpton’s research assistant for his book, Truman Capote. She was named the Media Industry Newsletter’s Editor of the Year in 2013 and FOLIO’s Women In Media Industry Leader in 2016 (among other awards) and sits on the boards of several organizations devoted to girls’ development and women’s leadership and advancement.

Our conversation here reflects the important stance Marie Claire has taken in advocating for women and helping them shine as individuals, community members, and change-makers.

What, if anything, of the French DNA is still in the U.S. edition of Marie Claire?
So in 1937, Marie Claire was founded by a single mom named Marcelle Auclair, who was a beauty editor, a yoga practitioner, and wrote several books. She was really ahead of the curve in terms of a lot of trends and not afraid to strike out and have her own direction. All 34 international editions of Marie Claire really pay close attention to that DNA of cutting-edge fashion and beauty coverage, the art and science of being a woman, and also staying faithful to our journalistic roots. We love the reported stories we do about women around the world and we have a really global perspective.

Yeah, I love how you cover how important giving back is in this day and age. How do you find those stories and think about reporting on this space?
Well, giving back has always been a part of the Marie Claire DNA. But I actually think it’s never been more fashionable and more possible to give back, partly because of social media, and because of a higher global awareness about the causes that affect us all, whether it be the environment or equal pay or education for girls. These are things that are now in the common currency of the culture, and these are things that we’ve always cared about. So many women are actually feeling the need to make a difference in the world.

When I graduated from college, it wasn’t as possible to make a difference immediately. Now there are so many inspiring stories. There’s actually momentum because women—young women—and men are seeing what’s possible and seeing what’s done out there already. I think we’ve done three different stories on women who have started companies or non-profit organizations where they’re giving excess food from either restaurants or schools to reach out to their community. Luckily and happily, we’ve become a larger part of everyone’s conversation in this demographic.

What are the biggest issues facing women these days, globally?
Girls’ education, access to healthcare. I was just in an event with the First Lady on Monday talking about her initiative about global attention to girls’ education. And certainly internationally that’s even a bigger deal than it is here. We heard from an amazing 16-year-old from Malawi who had been married off and was able to get out of that marriage and continue her education. She had me in tears.

Also facing all of us—men and women—is the environment. All the dignitaries gathered in New York last month to discuss climate change [at the UN’s General Assembly]. They are very inspiring, and we just sent Nina Garcia for our September issue to really learn about the effects that the fashion world in particular is having and can have on the environment.

On a very local level, [there’s the issue of] just how women are rising in the workplace and all of the sort of fallout from that in various industries. For the most part it’s positive, though we certainly have more work to do. [But now we’re] talking about entering the discussion in a different way: instead of just saying, ‘Look, you should fight for equal pay’—which, of course, is still important—but actually once you’ve entered the quarters of power, how do you negotiate a number of things, not the least of which is how do you get out the door every morning, but certainly how do you manage a board room if you’re the only woman in the room. How do you interact with other women in the industry? There’s a whole host of work issues that are facing this generation of women that we’re all hammering out for the first time.

Who can women look up to these days, and how has social media maybe changed that paradigm?
There are so many. I think the thing about this generation, with social media, is that people have been sort of specialized. So for some people it may be Simone Biles. For others, maybe it’s Michelle Obama. Or certainly a whole host of people, it’s probably Hillary Clinton in many ways just because of her historic role as the first nominee for a major party—regardless of what you think of her politics. I think certainly people are still looking up to celebrities, and celebrities may now feel more of the burden of acting and behaving and thinking about things that make them more appealing as a role model. 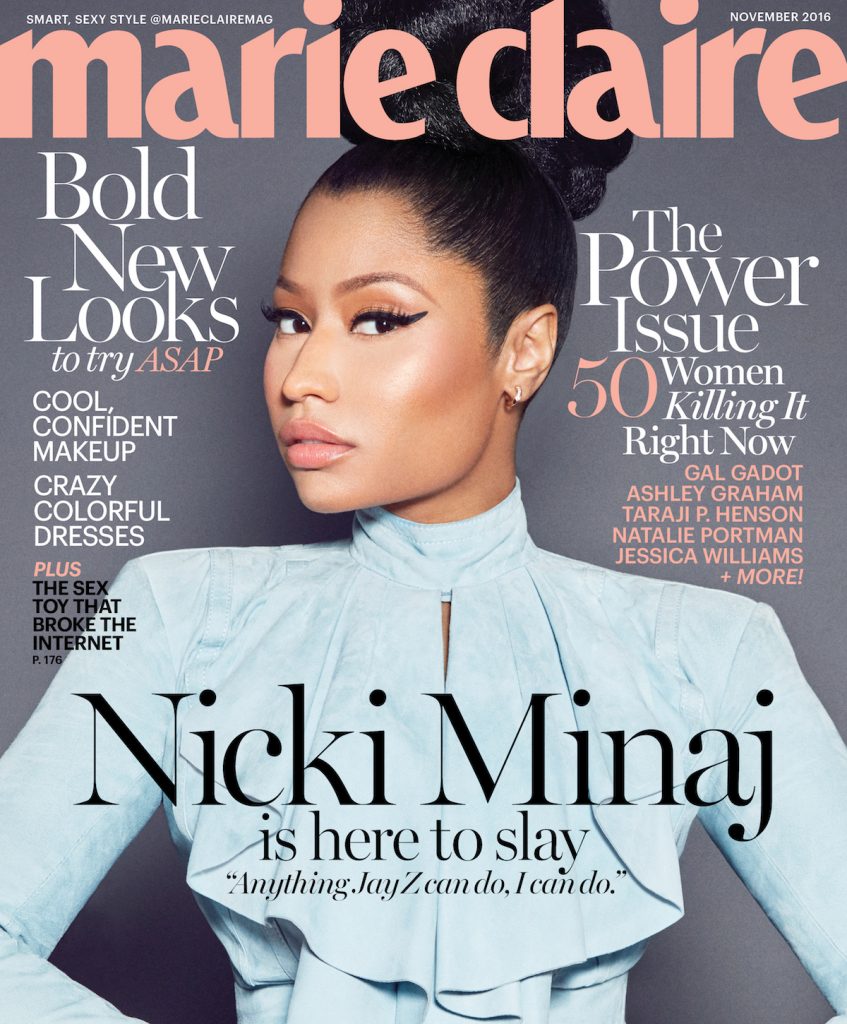 We have a phenomenal interview with Nicki Minaj in our November issue, and I find it incredibly inspiring what she says about these women still caring about marrying a guy for money or being with a guy for money and that there’s no way that anyone should be relying on anyone else for money. She’s got a whole host of very inspirational and very provocative quotes about becoming her own and being financially independent.

Who else…gosh, there are so many role models. There’s Marianne Lake at J.P. Morgan. Rising but still in one of the most male dominated industries. There are all the women out where you are in Silicon Valley. There are certainly not enough of them at the top of their companies and those who are there get a lot of coverage. We were just talking about Ayah Bdeir, the founder of Little Bits. She’s amazing. There is no shortage of role models for today’s young women, but I feel the responsibility of highlighting the right ones: the women whom our readers will not just be inspired by, but surprised and delighted by and from whom they can really learn.

How has social media and the changing publishing landscape change how you think about your job?
Social media changed everything. I remember years ago I was editing a story by Fran Lebowitz in Vanity Fair, and she was talking about the advent, the popularity, of television. She said we never thought of TV as a distraction; we never realized that the whole world would go to TV and be consumed by TV. And in many ways I think of Instagram and social media and Snapchat as the new version of that. It’s how a lot of people interpret the world or learn the news of the world. It is our primary communication method. It is certainly how my 10-year-old daughter knows what her friends were up to this summer. It changed everything. It’s not just changed publishing. It’s changed shopping. It’s changed fashion. (I haven’t quite figured out social shopping yet.) It’s changed the ways in which you can do good. I mean, [we can talk about] how we’re slaves to our phones, but I think it’s done a lot of great things. One of the best things I think social media has done is make young people feel more capable of making a difference and taking action.

What fashion trends or brands are you loving right now?
I love the return of the platform shoe. I never was really a fan of them myself but it certainly was in full force in New York Fashion Week. A lot of the color orange which I’ve always been a fan of. And I really love the whole deconstructed men’s wear that seems to be sticking around from last season. I’m right now wearing a sort of deconstructed men’s shirt that I’m obsessed with.

What’s your guilty pleasure?
Oh! So many (laughs). I’ve really loved my Aperol spritzers this summer. I never really deprive myself of a really great dessert, and I’ll binge watch the occasional TV show. I’m really looking forward to catching up on the third season of Peaky Blinders. It’s not a guilty pleasure, but I do try to take advantage of all of the little bit of free time I have to do pilates and acupuncture and getting my nails done when I can. (Laughs) That’s not a guilty pleasure.

Yeah, that’s not guilty at all.
But I do have those moments, like an hour a week to sort of indulge in some self-care. That feels pretty great, and I think it’s really important.