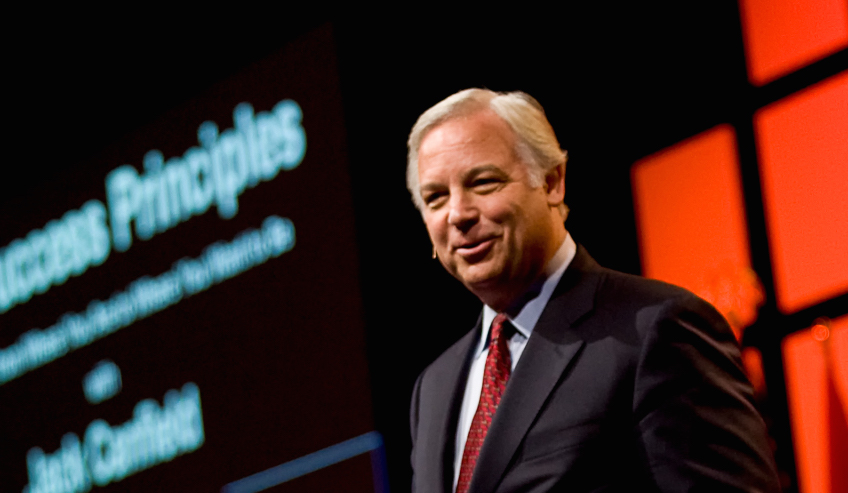 Jack Canfield went from a high school teacher to author, motivational speaker and entrepreneur who has now sold more than 500 million of his Chicken Soup for the Soul books. Though he admittedly started his career looking for financial success, he is now focused on fulfilling his “soul’s purpose,” something he says he works to help others find as well. For over 20 years, Canfield has spoken to people about the most difficult moments of their lives. We talked to him about what he’s learned about human emotions, happiness and self-esteem, all issues he addresses in his Flipboard Magazine, Success Principles.

This is the 10th anniversary of your book The Success Principles. How has the meaning of success changed during your career?
When I first started out, success to me was being financially successful, having my work be well known and being sought after. I would say then it became more of a generic being able to do whatever I want to do, whenever I wanted to do it. And I’d say about five years ago it evolved to fulfilling my soul’s purpose. I think the real definition of success, when you look at what really brings happiness to people, is when you ultimately discover what it is you love to do, which I believe is your soul speaking to you. In other words, joy is a feedback system that you experience that says you’re on course to do what you’re here to do. That’s been my definition of success the last five years.

I know you’ve worked on improving self-esteem. It seems like a root of so much negativity in our society. What would most help self esteem among young people? Is it a family change or a school change, something else?
Well, what I think affects self-esteem in a negative way is ongoing day-to-day drip technique of parenting, bullying in school, lack of success or not being addressed as a whole person. Self-esteem requires you to be in touch with your feelings and value them and not see them as bad. It requires you to have a self concept, which means an idea of yourself as a worthy person, worthy of love and respect; it requires you to program your subconscious mind for success so you can have success in school, sports, relationships. It requires you to be able to negotiate relationships to get your basic needs met for attention, touching, support and encouragement.

Has the increase in the self-help genre hurt or helped people sincerely looking to better themselves?
I think the self-esteem movement is great. There’s been some perversion of it in the schools where you give everyone a trophy for participation and not just for doing well. Sometimes it kind of takes away some of the specialness of when you do achieve. I want kids to feel like they earn their esteem. Experts would say self-esteem is the result of feeling lovable and capable and significant. Lovable should be given; capable is something you earn by exercising the talents you have and studying and working hard and developing your craft. That’s something that a lot of kids unfortunately aren’t doing today. You see a lot of entitlement in the upper classes. You see a lot of ‘I don’t give a shit’ in the lower classes because they don’t think they can make it, that the system is rigged.

I think that in general, the desire to build your own self-esteem or to build the self-esteem of your students, employees, things like that, is critical to success. Basically success is the result of surviving a risk. You’ve got to take risks. If you don’t have the self-esteem to survive that risk, you don’t take a risk because you don’t think you’ll survive it, you can’t win. So the more self-esteem you have, the more risks you can take.

How has technology changed the way you reach people and how recipients find the help they need?
I think it’s changed everything radically on a lot of levels. No. 1 it’s allowed us to reach people all around the globe. Twenty years ago when I was leading workshops everyone was from the United States and Canada. Now I’ll put on a training…and we’ll have people from 40 countries. Obviously they’re finding us through the internet; we’re able to reach them through the internet. We put a lot of our work on YouTube; we have a huge Facebook presence; we’re now doing the Flipboard Magazine and we have a huge Twitter following, LinkedIn and all that. People can access pretty much most of what they want without having to pay for it really.

I always say, you can’t hug someone over the internet. There are certain things you do that require face-to-face interaction. If you’re in a training room with 100 people, all of whom are devoted to being more successful, that’s a different environment than you at 3 a.m. in front of your computer watching a TED Talk. So I think it’s forced all of us to be more effective in that way. We just launched an online Train the Trainer program [a way to become a Canfield-trained success coach]. You get scripts for every exercise, you watch me setting them up, me answering questions and training, trainers from previous trainings where we did them live, and then you’ll also get PowerPoint or Keynote slides. The feedback we’re getting around the world is amazing.

Chicken Soup for the Soul books are fundamentally about people telling their stories, which means you’ve been listening to these tales for over 20 years! How have you seen people change, if at all?
Society as a whole is much more conscious. After 30 years of Oprah and Dr. Phil and things like that, people are much more psychologically sophisticated than they used to be. The number of books that come out, the trainings…they’ve reached millions and millions and millions of people. So I think people are realizing they can change. There’s a wonderful book by Carol Dweck, who’s a wonderful professor at Stanford University. She talks about mindset—fixed mindset, growth mindset. If you have a fixed mindset, you believe that who you are is who you are. It’s just who I am, I can’t change. If you have a growth mindset, you believe that your efforts to grow yourself will actually produce higher IQ, better emotional stability, greater success financially and in relationships. More people, as a result of what we’re seeing in the culture, have a growth mindset.

The Chicken Soup books are often very emotional. How did and do you balance moving people and reaching them emotionally without upsetting them?
I think there are mostly two kinds of crying that occurs when people read the Chicken Soup books: they’re moved by something beautiful, like we’re moved at a wedding when we see people get married, we’re moved at a funeral when we hear someone talk about the touching thing in life. There’s also the feelings of sadness and grief that occur. There are feelings of frustration that occur, tears of that kind. I think two things are true: obviously when we’re moved emotionally in a positive way, that’s a really good thing. When we’re moved emotionally and cry out of our own pain, that’s also healthy.

The word emotion—you have “e,” which means energy and motion, which means it moves. What happens when people become mentally ill, they’re not moved anymore by the same thing. They become cold, cut off, psychopathic, sociopathic. They don’t feel anymore. We don’t want people to shut down; we want people to feel. Feelings are important. Feelings are the fuel that fuels us in moving forward. Feelings are the essence of motivation. We feel hopeful or we feel angry. We can be motivated against something too.

For those who are new to your writings, what book(s) should they start with?
Well the first Chicken Soup for the Soul book is always a great read for the people. But the book I feel most proud of and the book that’s made the most difference in the lives of people is called The Success Principles.

We just released a 10th year anniversary edition. The first book, the stories, which came out in 2005, was filled with people like Steve Jobs and Bill Gates and pro football players. What’s exciting about the revised edition is that almost all of the stories now are illustrated by people who read the first book, applied the principle and doubled their income or got out of bed from a traumatic brain injury. A woman with a traumatic brain injury, told she’d never walk again, got the book, boyfriend read it to her, she walked down the aisle and is now happily married. Now she’s a motivational speaker. People who read the book who doubled and tripled their businesses in two years. So that’s what I think is so exciting about the book is that you read it and you go, “This really works, this makes sense, it’s possible, I’m just like that person, I can do it too.” 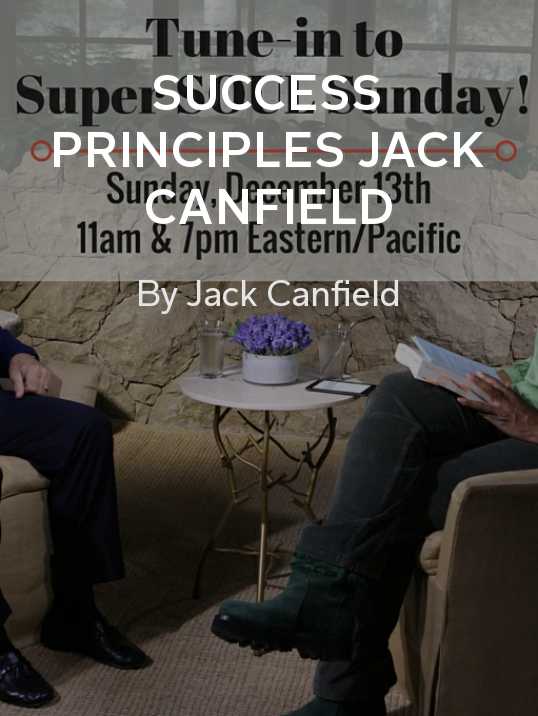 ~GabyS is reading All About Health