On the Red Couch with Writer/Designer Elle Luna 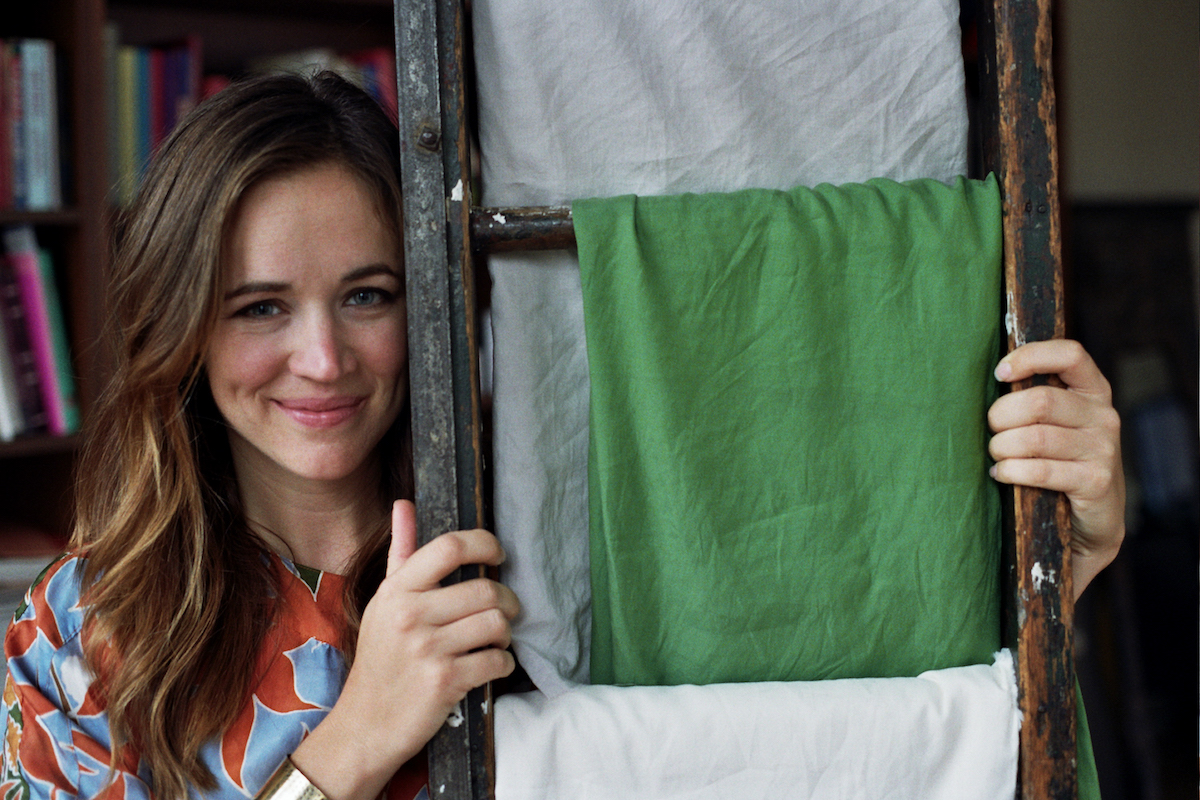 We first heard Elle Luna speak at the Alt Summit, a blogger conference in Utah that Flipboard sponsored. Not only were we rapt by her story—designer pens Medium essay that goes viral and sends her off on a personal journey of creativity, self-discovery and publishing—but also we were fascinated by her poise and emotional intelligence. Just how does one get this way, and can we have a sip of that?

Luna was kind enough to let us in on her path, how she overcomes fear, and what comes next when you’ve seemingly figured out everything. (Take notes!) Today’s also the start of a new round of her creativity-inducing #the100dayproject on social media. Get more details in the Flipboard Magazine, including how to participate and some great ideas for projects. 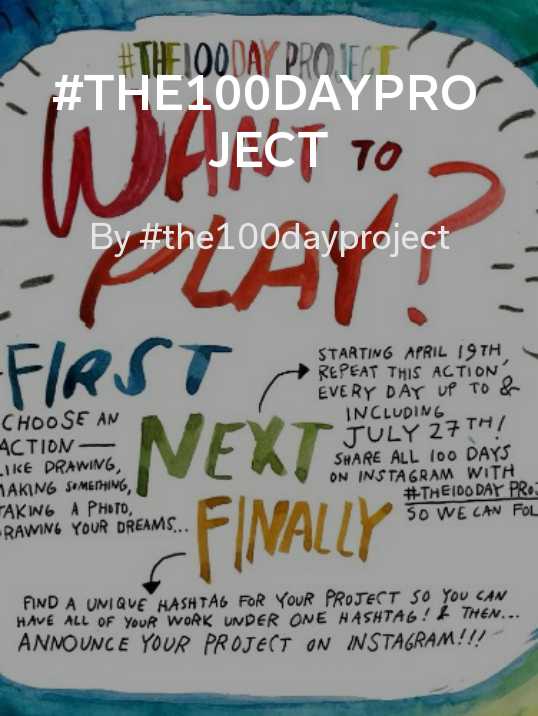 In your book you say, “In my own life, I’ve found that things appear at the ideal time—not before, not after.” Why do you think things happened to you when they did?
One of my favorite authors is Joseph Campbell. He was a mythologist and teacher who talked about the “hero’s journey,” which is a way of looking at the world and our lives in it. He talks about being ‘called to adventure.’ Part 1 of my book is called “The Crossroads,” but originally it was called “The Call to Adventure.” The way that Campbell talks about it is that it’s this thing that arrives in our lives—maybe it’s a person you meet, a song you hear, a dream that you have (in my case)—but it’s something that calls you out of your ordinary realm and into the world of adventure, the quest. This is a story told again and again throughout time. It’s why people go into caves, into the darkness, depriving themselves of stimulus so they can connect to another dimension. It’s the idea of stepping out of the known and stepping into an unknown that’s calling you in some way. In my own life, I began to hear that call, starting with my dreams, and I chose to follow it. 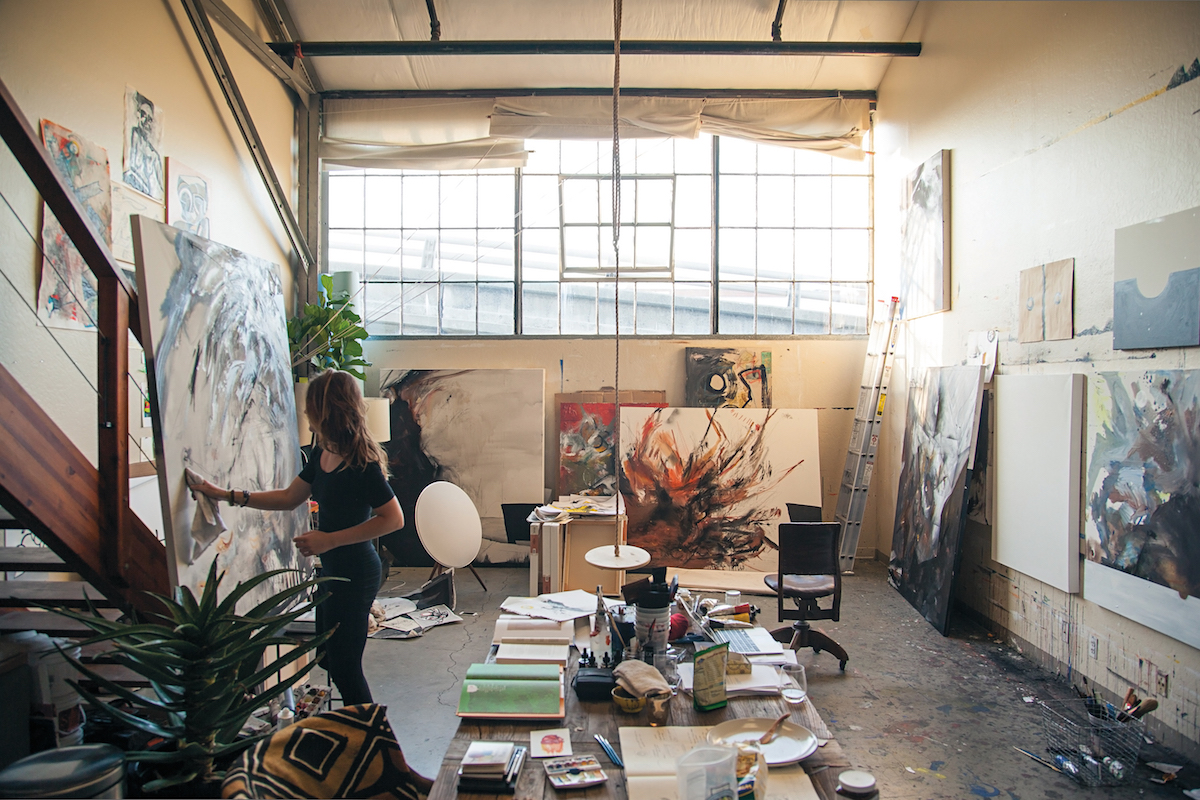 How did you translate that call into the essay you put on Medium?
Great question. Well, when we go on a journey, we begin encountering unknown things. I began to find that was happening in my own life, and I started asking questions. Being trained as a designer, I knew that having a good question was often more valuable than having the answer, because the answer can sometimes limit or confine us. A question opens up meaning, takes what is narrow and expands it, and brings in multiple, sometimes contradictory meanings. 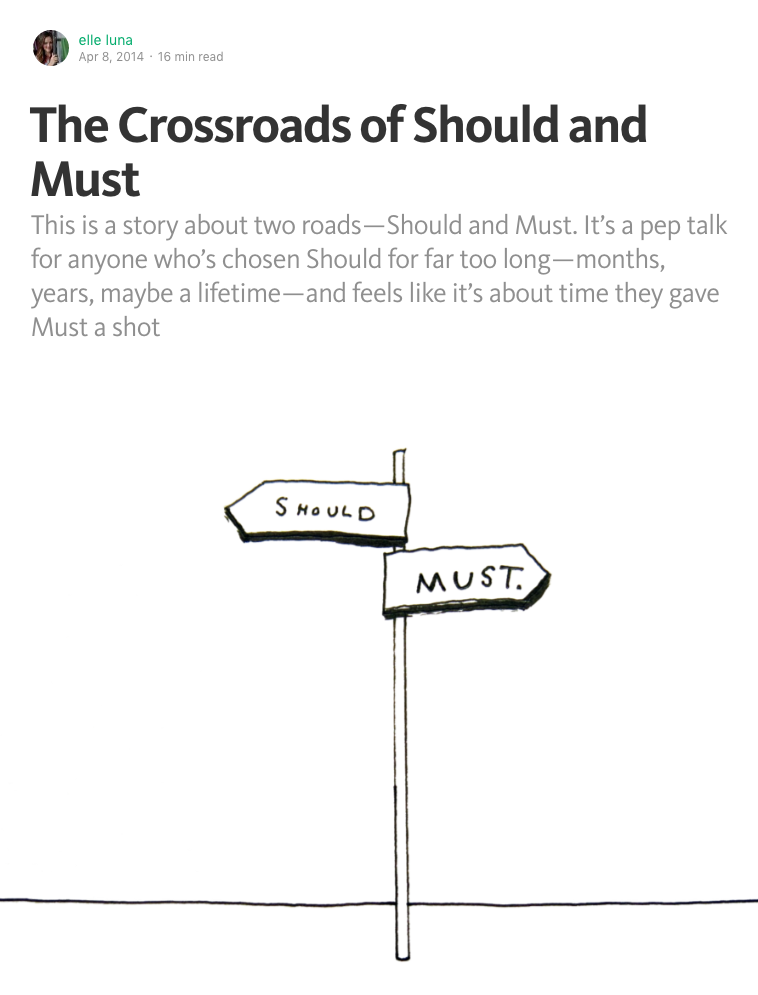 I started collecting these questions and sharing them online. The spirit of writing the Medium post was similar. It was my dad’s birthday, the day that I posted it. I hit publish and went out to celebrate, leaving my phone behind because I wanted to be really present and available to my family. When I came back after the cake and candles, I thought my phone was broken because the story was getting shared all over the internet. Not two weeks had gone by when it had been shared by over five million people on Twitter.

Why do you think it resonated so? Were there universal themes?
Well, The Crossroads of Should and Must is really about how we make decisions. We all are making decisions all the time, but the question is: Will you bring awareness to your decision-making? Will you bring thoughtfulness to whether you’re choosing to live your life in “should,” which is basically living your life for someone or something other than yourself, or will you choose “must” and honor who you are and what you believe? 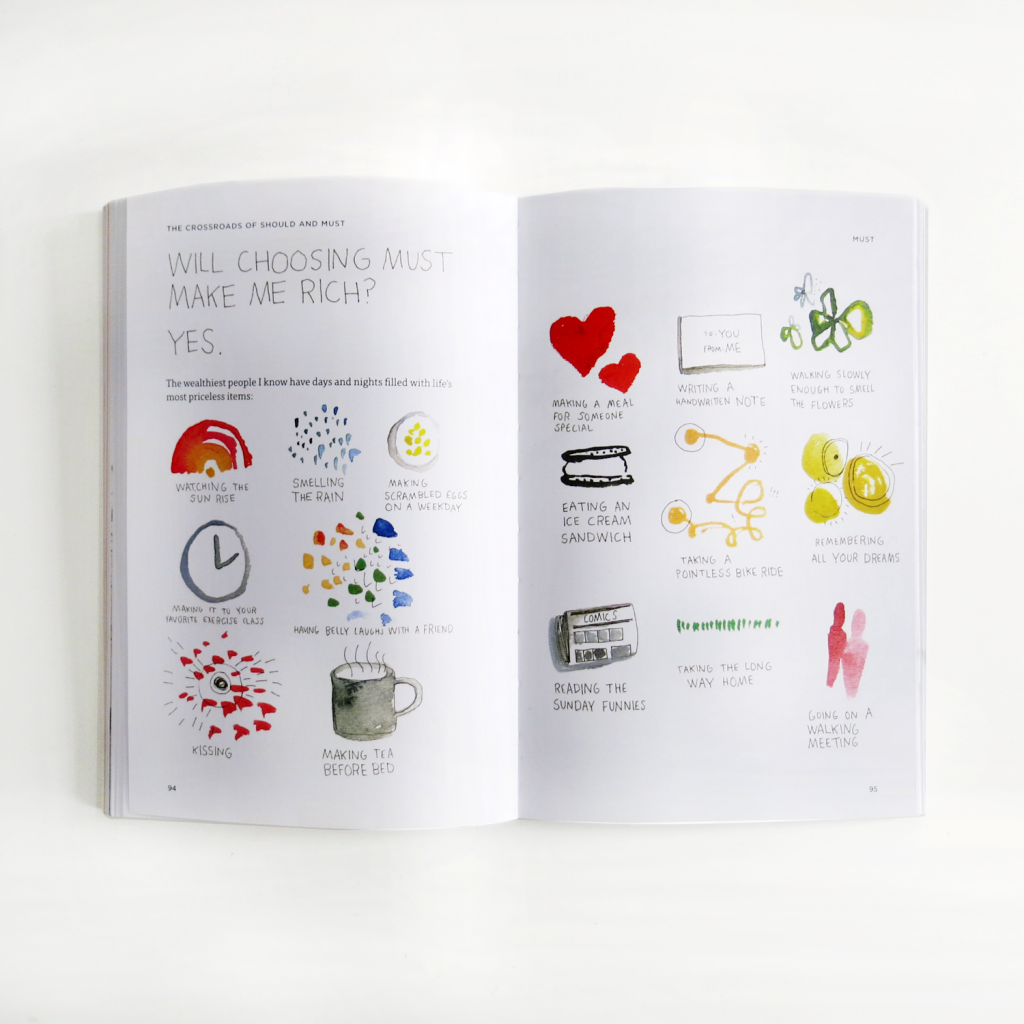 It’s tricky, right? The immediate impulse is to say, “I’m not going to choose ‘should!’ I’m going to be gung-ho for ‘must.'” But the truth of the matter is that we go through a phase of our life from when we’re born to our early teens where it’s very important that we understand the world of “should.” We have to listen to our parents and obey.

I was just reading about Nietzsche’s three transformations. He refers to the first transformation as the “camel phase,” which is about saying: “I will obey. Put the load right on my back.” And that’s being a kid. The world is teaching us how to survive. It’s about obedience and carrying the load for society.

The next phase is the lion. The task of the lion is to go into the desert and kill a dragon. And this is the part I think is very cool: the lion is only as strong as the load it carried when it was a camel. The name of this dragon is “Thou Shalt,” which is essentially the dragon of “should,” which is all these expectations from society. We come to a point in our lives when developmentally we have to face the dragon of “should” and we have to ask if we’re we going to choose to live in the prison of what we inherited, which might not be right for us, or if we’re going to slay the dragon and throw off the shoulds and come into our own realization as unique and incredibly creative and multifaceted people.

The last phase is when you overcome the dragon and the lion turns into a human.

In your book, you have some good tips for working through self-doubt and fear. Did you feel those things as you were transforming yourself?
Totally. I’m a big scaredy cat. Are you familiar with the Enneagram? It’s a really cool personal typology tool which I believe is the basis of the Myers-Briggs test. It talks about nine personality structures. My personality structure is a 7, which is very adventure-prone and optimistic. But then I have a 6, which can be very caught in fear.

I had to overcome a lot of fear, even in just writing a book. It’s very vulnerable. One of the things that I do a lot is writing down my fears, getting out a piece of paper and numbering it 1-10, and then writing, “What are you so afraid of?”

And I fill out that list with the most unbelievable, worst-case scenarios. This happened on an airplane the other day. My mind was running wild. When our fears get triggered, anxiety—real or imagined—alerts the entire nervous system. The brain can’t perceive between a nightmare and the reality of that nightmare; it’s the same thing to your brain. Your nerves are shot.

I learned that I need to get control of my fears. It’s not about fearlessness, which I don’t think is a possibility. It’s about transforming fear. If I can put things down on the page, it allows me to look at these insidious things that are very real for me and to walk myself through them, almost as if a parent were nurturing a child, and to say, “Now, is this really true?” When fears are on the page, you can negotiate them and get to know them. 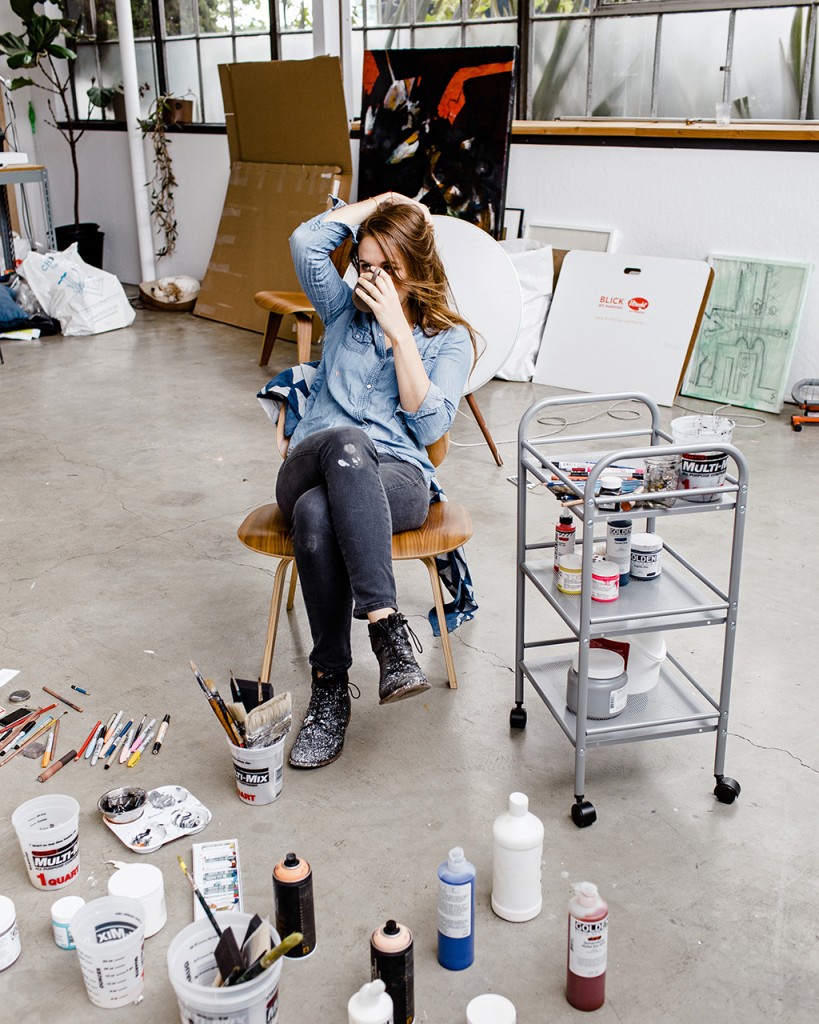 One thing I was struck by in your Alt Summit speech is how in tune you seem to be with your emotions. Have you always been this way?
No, I was very embarrassed about my emotions for a long time. I was giving a talk at the Do Lectures maybe a year or so ago, and in the middle of the talk I got so overwhelmed with feeling that I began to cry onstage. Right before I got onstage, I got an alert that said the book was available to buy online, which overwhelmed me.

I mentioned this to my therapist the next week, and I said, “Oh my gosh, I’m so embarrassed, I just I cried onstage in front of 100 people! This thing is going to be on the internet! What’s wrong with me?!” I felt like the drunk, babbling bridesmaid at the rehearsal dinner who just won’t stop talking and crying hysterically.

My therapist said, “Wow. You know, when that drunk, babbling bridesmaid is at the rehearsal dinner, the reason why she’s crying so hard is because she knows the couple getting married better than anyone else in the room. She’s seen them at their best and worst, and her heart is overflowing with feeling. And so she cries as her only expression of that love.”

That was some aikido right there! I instantly understood that to cry onstage wasn’t something shameful, it was beautiful. It meant that my heart was open. That helped me understand that my emotions are a superpower, not something to be ashamed of.

How would you advise others on how to be in tune with their emotions and cultivate that inner voice on what’s right and wrong?
The book has a lot of exercises on how we can bring our “shoulds” into consciousness. If we’re given “shoulds” from the moment we’re born, how do we see that? It’s like getting a fish trying to understand that they’re in water. It’s a hard thing to figure out when it’s all around you.

Awareness starts to come in the form of clues. If the fish perceives an air bubble, what does that mean about the significance of the circumstances it’s in? What we’re looking for are reflections that open up our present situation. I talk about ways you can do that in the book: create a list of your “shoulds,” write it down, etc. I also love talking into my voice recorder early in the morning when I’m half-asleep. There’s something about when I start to write and my “logic brain” kicks in, which has a need to make sense.

I pay attention to my dreams. I published a Skillshare class about painting your dreams, which is something I did last year for 100 days as part of the 100 Day Project. Our dreams are full of meaning. Paul McCartney came up with the tune to “Yesterday” in a dream, and Mary Shelley came up with “Frankenstein” from a dream.

And the Enneagram is another really powerful tool to empower self-awareness, to understand habitual patterns, and how you’re going to repeat them until you choose to change them.

Are there any books or people or articles who’ve helped you hone this thinking?
Yes, I’m just now putting finishing touches on the art for a friend of mine’s book, which will be coming out soon. Much of what I have gleaned along my own journey has come from her sharing her story with me, and I can’t wait to share it with you. We’ll be announcing more soon.

Another book I’d recommend is the Power of Myth by Joseph Campbell with Bill Moyers. It’s a really powerful way of understanding mythology, spirituality and the world’s great religions.

How has your calling changed since the publication of The Crossroads of Should and Must?
Someone asked me if we have many “musts” and if they change over time. My “must” isn’t changing but it’s narrowing. I am getting closer to the flame of what I burn for.

I think one of the biggest contributing factors is solitude. Without solitude, I’m not sure I’d be able to stay this course, especially now, when we’re just so busy and addicted to being busy as a culture. So I’m really seeking out solitude and nature, and have finally figured out how to make that a priority. When you’re in nature, you’re connected to the enormousness of everything that’s happening around us. Those ’empty spaces’ are like Tabula rasa, a blank slate, a moment of nothingness and quietness. Only then do you know what your next step will be.

~MiaQ is reading the creativity topic