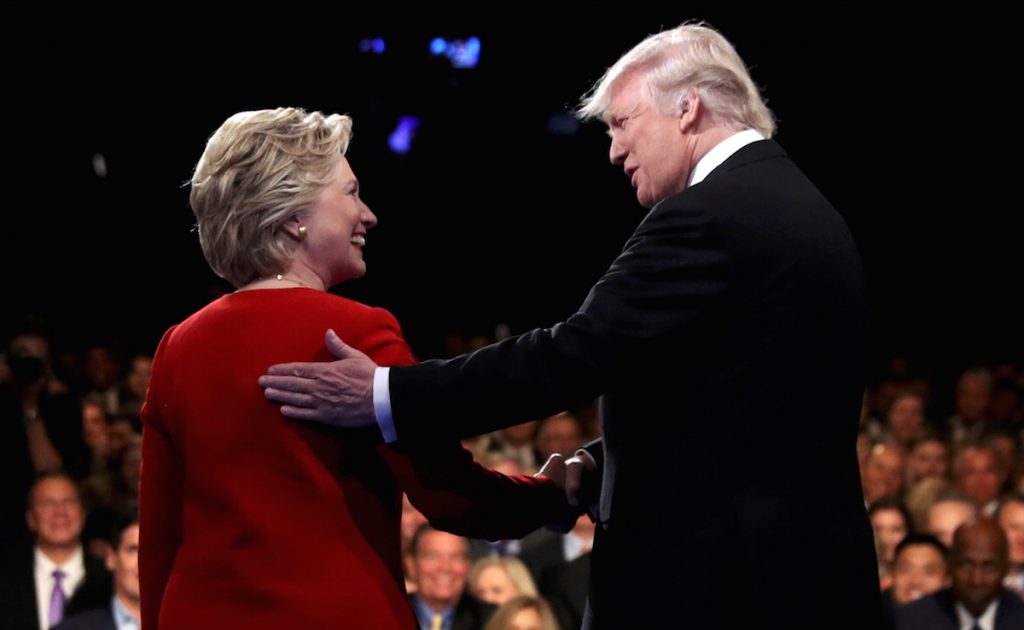 Trump shakes hands with Clinton at the start of their first presidential debate at Hofstra University in Hempstead, New York, U.S., September 26, 2016. REUTERS/Joe Raedle/Pool TPX IMAGES OF THE DAY

Democratic presidential nominee Hillary Clinton and Republican presidential nominee Donald Trump spent their first debate Monday night attacking each other personally and over policy. They sparred on trade and the Iraq war, her use of a private email server and his choice not to release his tax returns. Trump attempted to paint her as a creature of Washington, unable to enact change. Clinton attempted to paint him as an unprepared extremist.

Historically, first debates move the needle toward one of the candidates. Though political observers largely handed Monday’s win to the former secretary of state, the event is unlikely to move the needle much for either White House hopeful.

“A win is good for her. But on its own, it isn’t enough,” said CNN Politics Managing Editor Z. Byron Wolf.

We spoke to him after the Hofstra debate to break down the biggest moments for both candidates and get a preview of the issues we’re likely to hear on the trail going forward.

What were the strongest moments for Clinton?
Clinton had a really strong debate and almost every objective observer has said she won. CNN conducted a focus group and an instant poll and both have her with extremely high marks. It was clear she didn’t want to make the debate only about criticizing Trump, but those were her most effective moments. She is not a candidate—and I think even her supporters would agree—who has fired up or inspired voters. So she is perhaps best viewed in contrast to him. She drew those contrasts effectively. When she brought up his tax returns, it was the the most surgical deconstruction of a complicated issue that boils down to: Trump probably didn’t pay income taxes in some years. He said that’s smart business. She pointed out it means he didn’t pay money toward the military or the social welfare. The government, which just about everybody relies on in some fashion, runs on taxes. Nobody wants to pay a lot of taxes. But most people pay them. That was a good moment for her.

The other top moment came at the very end when she called out his verbal treatment of women and, in particular, brought up the former Miss Universe, Alicia Machado, who says Trump once called her “Miss Piggy.” The woman who would be the first woman president is very effective when she points out sexism against someone who flaunts his lack of political correctness.

What were the strongest moments for Trump?
Trump did score some points against Clinton. In particular, his riff near the beginning of the debate about NAFTA and trade agreements was very good. This is an issue on which Clinton has had to pivot. She used to support the Trans Pacific Partnership, but now does not. The economic legacy of her husband is something she has touted, but the specific issue of trade agreements is unpopular with many Democrats, so it is somewhat difficult for her.

That exchange was in the first half hour of the debate, which was, by far Clinton’s weakest time. She seemed off-balance when Trump came hot out of the gate and attacked her. But she clearly regained her footing.

Heading into the debate there was pressure on him to seem presidential and her to seem likeable. Did they succeed on those fronts?
No. He clearly made the decision to go after Clinton at the outset. He constantly interrupted her and the moderator, Lester Holt. He seemed uncomfortable physically—social media pointed out his repeated sniffles.

Who won the temperament test?
Clinton certainly kept her cool more than Trump. At one point, he mocked her for spending days off the campaign trail to prepare for the debate. She shot back that she’s been preparing to be commander in chief, too. The subtext: president is a serious job and you want someone who is preparing and cool. Advantage, Clinton.

Did their answers help make inroads with the demographics they’re courting, including minorities and young people?
For all her success, I’m not sure Clinton did herself any good on this front. Nothing she did is likely to endear her to Millennials, a group she needs to figure out how to get out to vote. She didn’t say anything new on race. Although she leads with minority voters and her entire strategy is to rely on the Obama coalition of voters, she has not yet figured out how to get these people pumped up to vote for her. At the moment, she seems more intent on getting them to vote against Trump. Trump’s strategy is one based on white voters. While she had the upper hand in this debate, I’m not sure he did anything that’ll turn off his base supporters, who prize political correctness. He probably didn’t gain any support. But he probably didn’t lose much, either.

The candidates answered to some of their vulnerabilities, including Trump on his taxes and Clinton on her emails. Will their answers help quell the controversies?
No. The email controversy has dogged Clinton for more than a year. She apologized last night. But she has apologized before. And the main issue voters seem to have with Clinton is that they don’t trust her. Another apology isn’t going to fix that.

The tax issue, for Trump, is devastating. Clinton was very effective in making the point that a billionaire should be paying taxes. His obfuscation and hiding behind the long-running claim that he’s under audit gets flimsier with each telling. Look for more from Clinton and her team on this in the future.

What issues will we see on the campaign trail that were left unresolved tonight?
Taxes. Emails. NAFTA. Trade deals. Climate change. His temperament. Her ability to inspire. There is so much that separates these candidates on both policy and personal terms. There are two debates and more than a month of campaigning to go. Miles to go.

How will this debate impact the race going forward?
I’m not sure how many minds were changed. But many opinions were probably affirmed. Clinton will get some much-needed good press to combat Trump’s surge to parity with her in recent polling. She had been ahead in August and they’re essentially tied now. A win is good for her. But on it’s own, it isn’t enough.

Follow CNN’s debate coverage on Flipboard and track the latest from the campaign trail in 2016 Election Central.