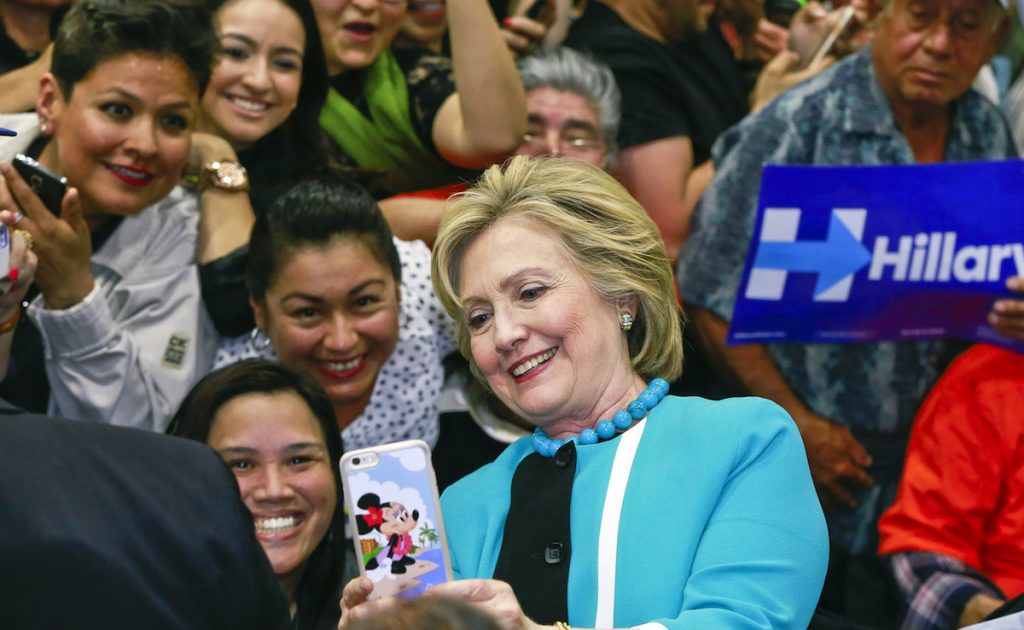 Hillary Clinton takes a photo with supporters at the end of a campaign stop at East Los Angeles College in Los Angeles. (AP Photo/Damian Dovarganes)

Washington Post National Political Reporter Abby Phillip is on the Hillary Clinton beat, covering her speeches, poll numbers and campaign tactics. That daily coverage now means reporting on a race that is increasingly negative on both sides of the political aisle. The two Democratic candidates, Clinton and Bernie Sanders, are taking each other and presumptive Republican nominee Donald Trump on in the lead up to the final primary contests. And Trump is being characteristically unabashed in his attacks on Clinton in particular. Polls suggest we’re in for a tight election in November, which makes the state of the race even more interesting. We spoke to Phillip about the candidate’s biggest liabilities among the voters and the potential that a third party candidate jumps in at this late date.

In what ways does Sanders’ presence in the race help or hurt Clinton?
Up until the moment Donald Trump became the presumptive Republican nominee you could argue that Sanders helped the Democratic race for two reasons.

1. A more competitive race is more interesting to voters and makes it more likely that they’ll vote. If they’ve voted once, they’ll vote again in November—and that makes the Democrats’ job easier.

2. Sanders has also arguably moved Clinton to the left, which is closer to where the core of the Democratic party is.

Things have become a little different now that Trump is able to act like a nominee. I’m hearing a lot more Democrats anxious that a long primary is already hurting them, because it’s preventing them from launching fully into a coordinated effort against Trump. It also depends a lot on how Sanders closes out the race. Will he go negative or will he stick to the issues? No one knows just yet.

What are Clinton’s greatest weaknesses and strengths among Democratic voters?
Clinton’s strength is far and away her experience. Almost every Democratic voters—whether they like Bernie or Hillary—will agree: she is qualified.

Her weakness among Democrats is the same as with voters across the board: she has a hard time connecting with people’s core concerns. Politics isn’t just about issues. It’s also about something less tangible: trust. Or in other words: “Do you care about people like me.”

In primary after primary, Democratic voters have said they don’t trust Clinton as much as Sanders. And they have also said that they believe Sanders is more in touch with their concerns than Clinton is. This is a problem that probably won’t go away in the general election.

The other has to do with money. She is spending a lot of money on a primary and not as much on the general election. Democrats very much wish that wasn’t the case.

Down ballot Democrats are in a holding pattern. Until Clinton is the nominee, she can’t fully coordinate with other national Democrats about how to pool resources that might help them compete to take over the Senate, for example.

Since you spend your days covering Hillary Clinton, what are the biggest changes in the campaign and/or the candidate that you’ve noticed since she started this race?
The realization that Bernie Sanders’s candidacy was real and was a force to be reckoned with is one that we all, as reporters, saw play out in real time. It began just before the Iowa caucuses, and frankly, hasn’t let up since. Clinton went months without really addressing Sanders in her campaigning. As Iowa approached, that changed dramatically. The two candidates have also evolved from addressing each other cordially on the stump to the kind of campaigning we’ve come to expect in American politics. The Democratic race went from bean bag to a real match and it was clear that Clinton wasn’t expecting that to be the case.

What demographics does Trump need to win to win the White House? And how is he faring among those now?
There are two theories on this:

1. Trump needs to win a lot more white voters than previous Republicans have won. Trump typically performs well among white voters, specifically non-college educated white voters. If he can do that, he may be able to overcome potential challenges with independent voters and minority voters. This scenario is possible, but most demographers and pollsters say it would be very difficult.

2. Suburbs are key: In a lot of battleground states, the stalwart Republican electorate resides in the suburbs of major cities in places like Ohio and Wisconsin. Trump would need to consolidate their vote, perform better than average in rural areas. And he would also need to find support among moderate, independent voters, who may also live in the suburbs. A key demographic there is married women who tend to be more moderate and are often swing voters in places like Northern Virginia.

Is a third party bid a realistic option, both in terms of election rules and gaining enough traction?
A third party bid is possible logistically speaking, but all the evidence suggests that it would harm one of the two major party candidates, but would not be successful enough to win. If the third party candidate is a libertarian or a Republican, that person would likely harm Trump’s candidacy, leaching voters in places where the Republican nominee would need them the most. Some polls suggest that in a three way race, third party candidate could receive a quarter or a third of the vote. That’s not enough to win, but it is enough to be a serious headache.

What 5 adjectives would you use to describe the current state of the race?
Unpredictable, exciting, surprising, historic, negative

Read The Washington Post on Flipboard for extensive coverage of the 2016 election.