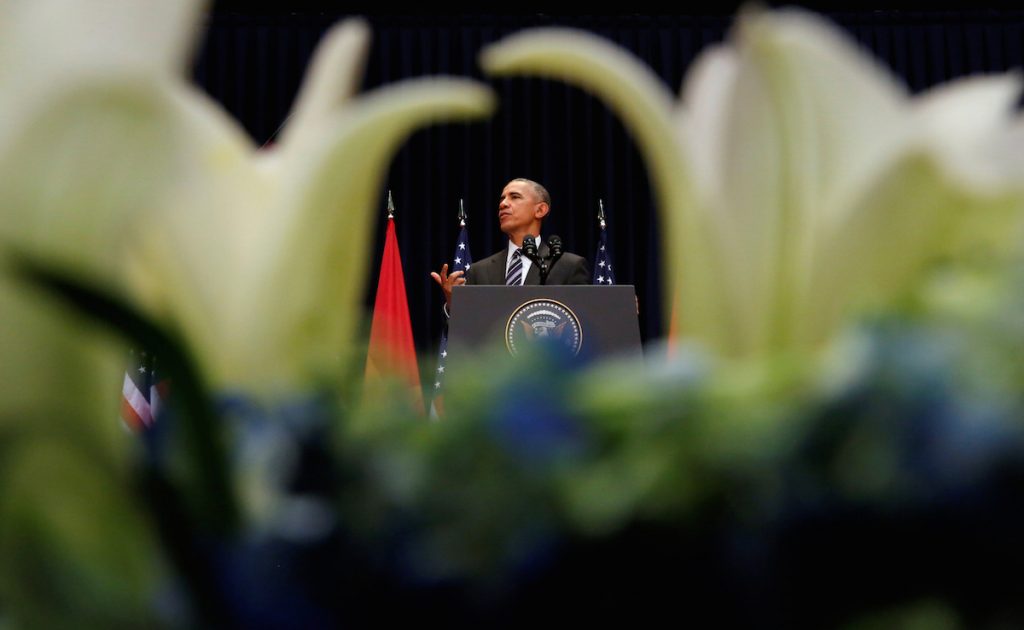 President Barack Obama was in the news consistently this week during his trip to Asia, which included a historic visit to Hiroshima, the lifting of the Vietnam arms embargo, comments about the U.S. presidential election and the G7 summit. While the president was abroad, 11 states sued the Obama administration over the federal directive on transgender bathroom use in public schools, a State Department report thrust Hillary Clinton’s email scandal back into the spotlight, a Donald Trump rally in Albuquerque turned violent and Baltimore Police Officer Edward Nero was found not guilty in the Freddie Gray case, among other news. Read more about these topics and issues in stories from this week’s Daily Edition below.

Top line: “Obama’s visit, the first to Hiroshima by a sitting U.S. president, had stirred great anticipation here and across Japan among those who longed for an American leader to acknowledge the suffering of the estimated 140,000 killed during the bombing on Aug. 6, 1945, and its aftermath. That figure includes 20,000 Koreans who had been forced by the Japanese military to work in the city for the imperial war machine.”

Top line: “The United States is rescinding a decades-old ban on sales of lethal military equipment to Vietnam, President Obama announced at a news conference in Hanoi on Monday, ending one of the last legal vestiges of the Vietnam War.”

Top line: “The Afghan Taliban has officially named a successor to its former leader, Mullah Akhtar Mohammad Mansour, who was killed in a U.S. drone strike in Pakistan last week.”

Top line: “A State Department Inspector General report said former Secretary of State Hillary Clinton failed to follow the rules or inform key department staff regardingher use of a private email server, according to a copy of the report obtained by CNN on Wednesday.

The report, which was provided to lawmakers, states, ‘At a minimum, Secretary Clinton should have surrendered all emails dealing with Department business before leaving government service and, because she did not do so, she did not comply with the Department’s policies that were implemented in accordance with the Federal Records Act.'”

Top line: “One of the six officers charged in the arrest and death of Freddie Gray was found not guilty on all counts in Baltimore on Monday. Baltimore Circuit Judge Barry Williams cleared Officer Edward Nero of charges of assault, misconduct in office and reckless endangerment.

Nero, 30, was one of two officers who initially made eye contact with Gray before his arrest. Gray, 25, died on April 19, 2015, a week after his neck was broken while he was transported in a police van — shackled and handcuffed, but without a seat belt.”

Top line: “Texas and 10 other states are suing the Obama administration over its directive to U.S. public schools to let transgender students use the bathrooms and locker rooms that match their gender identity. The lawsuit announced Wednesday includes Oklahoma, Alabama, Wisconsin, West Virginia, Tennessee, Maine, Arizona, Louisiana, Utah and Georgia. It asks a North Texas federal court to declare the directive unlawful in what ranks among the most coordinated and visible legal challenges by states over the socially divisive issue of bathroom rights for transgender persons.”

The 7-1 verdict, written by Chief Justice John Roberts, reversed Georgia courts that had denied Timothy Foster’s claim of racial bias in jury selection during his trial for the murder of an elderly white woman. The ruling is likely to fuel contentions from death penalty opponents that capital punishment is racially discriminatory.”

Top line: “What began as an assembly of about 1,000 peaceful protesters outside a Donald Trump rally at the Albuquerque Convention Center morphed into madness Tuesday evening when mostly young, raucous rioters joined the ranks, hurling burning T-shirts, rocks and bottles toward the police and police horses trying to contain them.

Several Albuquerque police officers were injured by the projectile rocks, and at least one rioter had been arrested by the end of the night, the department tweeted. Protesters finally dispersed from the city’s downtown streets late Tuesday night, hours after the rally ended, when police in riot gear unloaded pepper spray on the dwindling crowd.”

Top line: “Prosecutors in Pennsylvania on Tuesday crossed their final hurdle to bring Bill Cosby to trial on charges that he drugged and sexually assaulted a woman he once mentored, with a judge ruling that enough evidence existed for the case to move forward.”

Top line: “The head of security for the Transportation Security Administration, Kelly Hoggan, has been removed from his position after a hearing about the agency’s management, the House Oversight Committee says…The changes come as fliers complain about long, slow airport screening lines. That problem “has many parts,” as NPR’s Brian Naylor has reported: More people are traveling, and there are fewer screeners.”