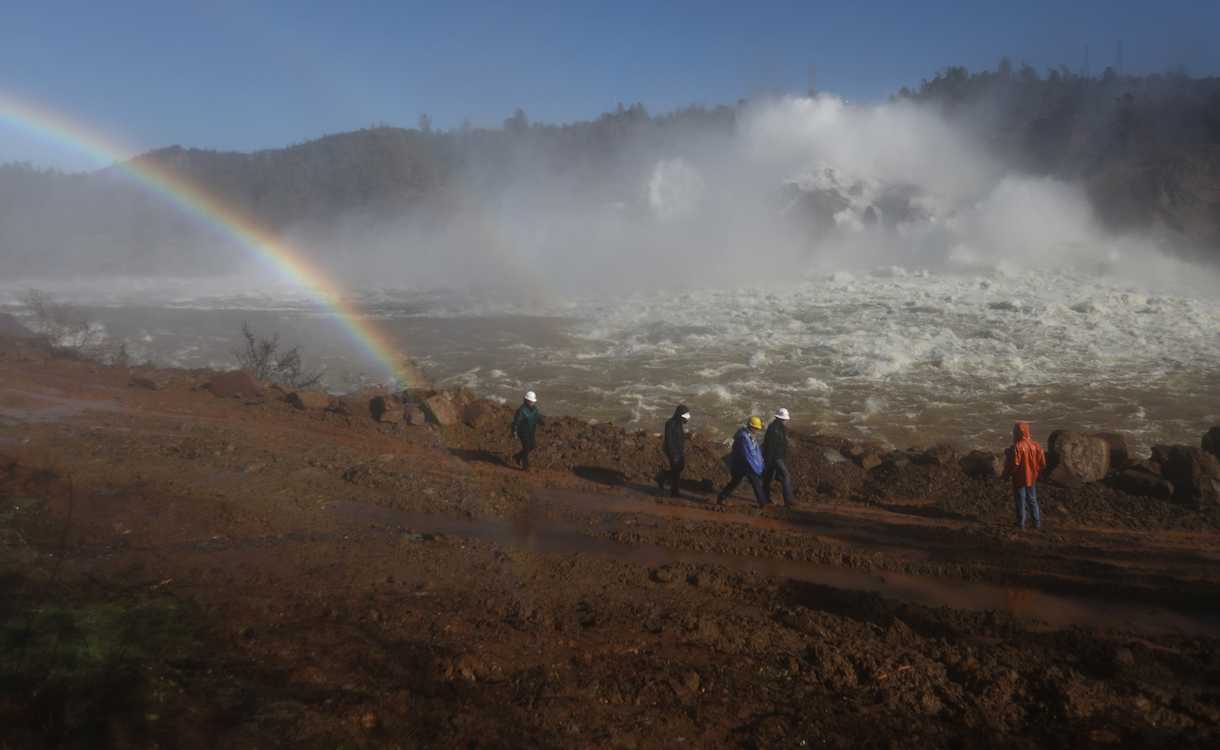 Water is released from the Lake Oroville Dam after an evacuation was ordered for communities downstream from the dam in Oroville, California, U.S., February 14, 2017. REUTERS/Jim Urquhart TPX IMAGES OF THE DAY

Almost 200,000 Californian residents were evacuated from their homes Sunday over fears the emergency spillway at the Oroville Dam would fail, leading to flooding of neighboring communities.

The dam, located near the Sierra Nevada mountain range in Northern California, helps create the Lake Oroville reservoir. The tallest in the U.S., the dam provides flood prevention for the surrounding urban areas, supplies water for communities and irrigation, and creates hydroelectricity for Californians.

The main spillway prevents the dam and the surrounding community from being flooded and damaged. Most of the time it is dry, but it allows water to flow directly into the Feather River below the dam. An extra emergency spillway enables engineers to divert water when levels become too high.

The dam has seen rising levels of water after heavy rain and snow this winter. Following more than five years of severe drought, the wet weather has led officials to release water from various dams across Northern California.

A sinkhole appeared in the concrete of Oroville’s main spillway last week, forcing engineers to divert water over the emergency spillway for the first time since the dam was constructed in 1968.

But severe erosion of the hillside underneath the wall of the emergency spillway caused extra alarm. If the wall were to fail a flood of water would enter the Feather River basin, threatening the surrounding communities.

People living downstream of the dam were evacuated as a precaution, and California Governor Jerry Brown ordered an emergency response. President Donald Trump approved federal emergency aid for California in response to the risk of flooding.

In 2013 the American Society of Civil Engineers conducted a survey of the nation’s infrastructure. Maintenance of dams received a “D” grade, with the report stating U.S. dams are “aging and underfunded.”

By Tuesday evacuated residents were allowed to return. Water levels fell and the flow was no longer diverting onto the emergency spillway. Though concern for the dam is still high and work has continued throughout the week to fortify the eroded hillside and help it withstand future water increases.

The weather is predicted to worsen over the weekend, with storms expected. As work continues to prevent a major disaster, follow all the updates via these Flipboard topics and magazines.

California Drought: An in depth look at one of the environmental issues affecting the Sunshine State

Weather: From tornadoes to snow storms to drought—the extreme weather taking its toll on the U.S.

CLIMATE CHANGE 2017 by Cornucopia: Read up on Trump’s views on climate change

Climate Shift by Anton Prodanovic, Ph.D.: Which country is the greenest? Find out here

The Big Melt by Derek Evans: Learn about the impact of rising sea levels

Environmental by CJ: Stories covering the latest scientific discoveries on the world’s environment