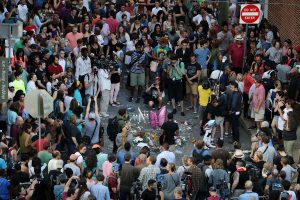 CHARLOTTESVILLE, VA – AUGUST 13: Hundreds of people gather at an informal memorial on the spot where 32-year-old Heather Heyer was killed when a car plowed into a crowd of people protesting against the white supremacist Unite the Right rally August 13, 2017 in Charlottesville, Virginia. Charlottesville is calm the day after violence errupted around the Unite the Right rally, a gathering of white nationalists, neo-Nazis, the Ku Klux Klan and members of the ‘alt-right,’ that left Heyer dead and injured 19 others. (Photo by Chip Somodevilla/Getty Images)

Massive clashes and unrest took place in Charlottesville, Virginia this week after white nationalists, neo-Nazis, and other groups descended on the city for “Unite the Right” rally.

Organized to protest the city’s vote to remove the statue of Robert E. Lee, a Confederate general, from the Emancipation Park, Saturday’s rally soon took a violent turn.

Tensions heightened when a group of counter-protesters blocked neo-Nazis and other hate groups from entering the park, but a small group of white supremacists shoved through them with bats, batons and shields .

Upon seeing this, some anarchists and members of the antifa came to the defense of the counter-protesters and stood in front of them. Major fights broke out and rally goers deployed tear gas and pepper spray on each other.

Heather Heyer, 32, died and at least 19 others were wounded when a car rammed into a group of counter-protesters in Downtown Charlottesville. The suspect, who was identified as 20-year old James Alex Fields of Ohio, was arrested and charged with one count of second-degree murder, three counts of malicious wounding and one count related to leaving the scene of the wreck. 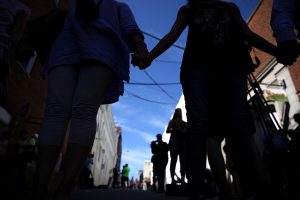 CHARLOTTESVILLE, VA – AUGUST 13: People gather and hold hands at a makeshift memorial for Heather Heyer who was killed during yesterday’s violence at the “Unite the Right” rally August 13, 2017 in Charlottesville, Virginia. The city of Charlottesville remains on edge following violence at a ‘Unite the Right’ rally held by white nationalists, neo-Nazis and members of the ‘alt-right’ (Photo by Win McNamee/Getty Images)

In a separate incident, Lieutenant H. Jay Cullen, 48, and Trooper-pilot Berke M.M. Bates, 40, Virginia State Police pilots, lost their lives when their helicopter crashed in a wooded area while monitoring the rally.

Saturday’s rally was able to take place after a preliminary injunction was granted by U.S. District Judge Glen Conrad Friday night in response to a lawsuit filed against the city by right-wing blogger Jason Kessler.

Shortly after the ruling, hundreds amassed and marched on the University of Virginia campus, wielding tiki torches and chanting “blood and soil”, “white lives matter” and “you will not replace us”. They were soon met with counter-protesters who shouted “No Trump, no KKK, no fascist USA!”

As clashes between both sides ensued, the police shut down the march and asked everyone assembled at the university to disperse.

In an effort to quell the violence on Saturday, the Governor of Virginia Terry McAuliffe declared a state of emergency in the state.

“I have a message to all the white supremacists and the Nazis who came into Charlottesville today: Our message is plain and simple. Go home. You are not wanted in this great commonwealth. Shame on you. You pretend that you are patriots, but you are anything but a patriot,” McAuliffe said. 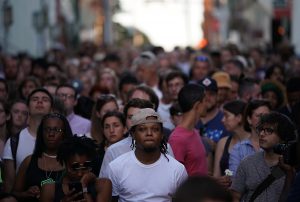 CHARLOTTESVILLE, VA – AUGUST 13: Hundreds of people gather at an informal memorial on the spot where 32-year-old Heather Heyer was killed when a car plowed into a crowd of people protesting against the white supremacist Unite the Right rally August 13, 2017 in Charlottesville, Virginia. Charlottesville is calm the day after violence errupted around the Unite the Right rally, a gathering of white nationalists, neo-Nazis, the Ku Klux Klan and members of the ‘alt-right,’ that left Heyer dead and injured 19 others. (Photo by Win McNamee/Getty Images)

Amid building criticism, President Trump initially took to Twitter to issue a generic statement about hate and violence on Saturday. “We ALL must be united & condemn all that hate stands for. There is no place for this kind of violence in America. Lets come together as one!,” Trump tweeted.

Later in the afternoon, Trump issued a broader statement speaking at an event in Bedminster, New Jersey. “We’re closely following the terrible events unfolding in Charlottesville, Virginia. We condemn in the strongest possible terms this egregious display of hatred, bigotry and violence on many sides, on many sides. What is vital now is a swift restoration of law and order,” said Trump.

Trump’s comments were met with heavy criticism from both Republicans and Democrats for being inadequate and not explicitly condemning hate groups.

Senator Cory Gardner (R-CO) said in a tweet, “Mr President – we must call evil by its name. These were white supremacists and this was domestic terrorism.”

Senator Marco Rubio (R-FL) tweeted, “Very important for the nation to hear @potus describe events in #Charlottesville for what they are, a terror attack by #whitesupremacists”

Senator Orrin Hatch (R-UT) said in a tweet, “We should call evil by its name. My brother didn’t give his life fighting Hitler for Nazi ideas to go unchallenged here at home.”

“There are no good neo-Nazis, and those who espouse their views are not supporters of American ideals and freedoms. We all have a responsibility to stand against hate and violence, wherever it raises its evil head,” Senate Majority Leader Mitch McConnell said.

Speaker of the House Paul Ryan tweeted, “We must be clear. White supremacy is repulsive. This bigotry is counter to all this country stands for. There can be no moral ambiguity.”

Senator John McCain (R-Arizona) also criticized Trump on Twitter. “There’s no moral equivalency between racists & Americans standing up to defy hate & bigotry. The President of the United States should say so.”

The Senate minority leader Chuck Schumer, said in a statement: “The march and rally in Charlottesville goes against everything the American flag stands for. President Trump must condemn this in the strongest terms immediately.”

On Sunday, the White House issued a statement saying, “The president said very strongly in his statement yesterday that he condemns all forms of violence, bigotry, and hatred, and of course that includes white supremacists, KKK, neo-Nazi, and all extremist groups. He called for national unity and bringing all Americans together.”

In an attempt to correct course, Trump made a second statement at a press conference at Trump Tower.

“Racism is evil and those who cause violence in its name are criminals and thugs, including the KKK, neo-Nazis, white supremacists and other hate groups that are repugnant to all that we hold dear as Americans,” said Trump. Those comments came 48 hours after the first statement.

While taking questions from the reporters, Trump asked, “what about the alt-left that came charging at the, as you say, the alt right? Do they have any semblance of guilt?”

When questioned if he was putting “the alt-left and white supremacists on the same moral plane,” Trump responded, “I am not putting anybody on a moral plane, what I’m saying is this: you had a group on one side and a group on the other, and they came at each other with clubs and it was vicious and horrible and it was a horrible thing to watch.”

Many CEOs on Trump’s business councils resigned as a result of his comments and issued a number of statements. Trump later disbanded the Manufacturing Council and the Strategic and Policy Forum.

“Rather than putting pressure on the businesspeople of the Manufacturing Council & Strategy & Policy Forum, I am ending both. Thank you all!” tweeted Trump.

News broke on Friday that all 16 members of the President’s Committee on the Arts and the Humanities resigned to protest Trump’s “hateful rhetoric.”

Follow the aftermath of the events that took place in Charlottesville via these magazines and topics on Flipboard:

Charlottesville: How did the city descend into chaos over the weekend? Track the latest.

Donald Trump: Follow minute-by-minute updates about the president via this topic.

U.S. Congress: See what the lawmakers have to say about the events in Charlottesville.