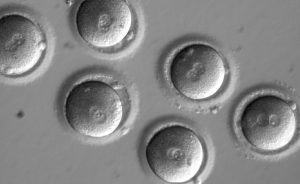 The first sign of successful in vitro fertilization, after co-injection of a gene-correcting enzyme and sperm from a donor with a genetic mutation known to cause hypertrophic cardiomyopathy. (Courtesy of OHSU)

For the first time this week scientists removed deadly gene mutations from human embryos, marking a significant breakthrough that scientists theorize could potentially engender the end of some genetic diseases.

The landmark study, which successfully expunged a portion of disease-causing genes, focused on hypertrophic cardiomyopathy, a heritable condition that causes sudden heart failure in young athletes. It affects one in 500 people.

The experiment was led by Dr. Shoukhrat Mitalipov, director of the Center for Embryonic Cell and Gene Therapy at Oregon Health and Science University. He was joined by a team of researchers in the U.S., South Korea and China, and a detailed report on the research was published Wednesday in the journal Nature.

Scientists believe gene-editing has brought about a monumental shift in medicine and can potentially spell the end of about 10,000 inherited diseases, including but not limited to, Huntington’s, Tay-Sachs, beta thalassemia, cystic fibrosis, sickle cell anemia, early-onset Alzheimer’s and breast and ovarian cancer.

A technology called CRISPR-Cas9 (Clustered Regularly Interspaced Short Palindromic Repeats), which acts like a pair of scissors, was employed in the experiment. The Cas9 enzyme has the ability to cut the DNA helix at a precise location – in this case at the faulty disease-carrying gene. The cell will then automatically paste together the ends of the broken DNA with slight change in the sequence or a new piece of DNA can be introduced by scientists and integrated into the cells.

For the purpose of the research, scientists took sperm from a patient with hypertrophic cardiomyopathy and injected it along with the Cas9 enzyme into healthy eggs. However, in this experiment, the newly formed embryos copied the healthy genes from the eggs and were able to repair themselves independent of outside assistance.

“The embryos are really looking for the blueprint. We’re finding embryos will repair themselves if you have another healthy copy.,” said Dr. Mitalipov in an interview.

Out of the 58 embryos that formed part of the study, the experiment proved effective in 42 of them, thus eliminating the possibility of inherited diseases in generations to come.

“By using this technique, it’s possible to reduce the burden of this heritable disease on the family and eventually the human population. Every generation on would carry this repair because we’ve removed the disease-causing gene variant from that family’s lineage,” added Dr. Mitalipov, who caused a quite a stir in the scientific community in 2014 by performing the world’s tiniest surgery that entailed removing the nucleus from a human egg and placing it into another.

Jennifer Doudna, a UC Berkeley molecular biologist, who pioneered the technology for editing genomes said, “It feels a bit like a ‘one small step for (hu)mans, one giant leap for (hu)mankind’ moment. I expect these results will be encouraging to those who hope to use human embryo editing for either research or eventual clinical purposes.”

Last year, researchers in China deployed the technique in first-ever human trials but had a low rate of efficiency. 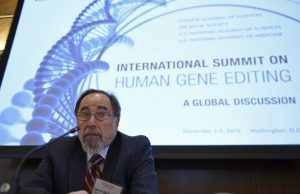 Nobel laureate David Baltimore of CalTech speaks to reporters at the National Academy of Sciences international summit on the safety and ethics of human gene editing, Tuesday, Dec. 1, 2015, in Washington. Alternating the promise of cures for intractable diseases with anxiety about designer babies and eugenics, hundreds of scientists and ethicists from around the world began debating the boundaries of a revolutionary technology to edit the human genetic code. (AP Photo/Susan Walsh)

Although the experiment marks a major milestone in the field of genetic engineering and has pushed the scientific envelope further than ever, there are many who fear that “germline engineering” will beget an age of designer babies.

The American Society of Human Genetics (ASHG) workgroup support and endorse research into genetic engineering to treat incurable diseases but are deeply skeptical about injecting edited embryos in actual pregnancies.

“In the future, human gene editing shouldn’t be allowed unless its use is justified medically, ethically, and all while taking into consideration the opinion of doctors, scientists, and the general public, including the people affected by genetic diseases.,” cautioned ASHG in a statement.

While all the altered embryos have since been destroyed, Dr. Mitalipov argued that the cell behavior might prevent adding traits for designer babies. “All we did is un-modify the already mutated gene.”

As the new era in medicine dawns upon us, follow the latest updates in science via these magazines and topics on Flipboard:

EMBRYO EDITING: THE ETHICS OF CRISPR: Everything you need to know about the gene-editing tool CRISPR

Genetics: Follow all the advancements in the field of genetics

DNA: Read about the molecule that carries genetic instructions from one generation to the next

Medicine: Discover this comprehensive collection of stories on medicine

Science: From path-breaking experiments to revolutionary technologies, track the latest in science here.