The Ebola crisis reached new heights in the United States this week: two Americans were hospitalized with the disease and the Centers for Disease Control classified the outbreak as a “level 1 activation,” a benchmark reserved for the most serious public health emergencies.

In the last four months, Ebola has killed more than 900 and infected more than 1,700, mostly in Liberia, Sierra Leone and Guinea, making it the largest outbreak in history. Although experts insist the U.S. is equipped to stem a spread within its borders, the epidemic is causing national and international concern and action.

“There is always the possibility that someone with an infectious disease can enter the United States,” CDC spokeswoman Barbara Reynolds said Monday. “The public health concern is whether it would spread and, if so, how quickly.”

Magazine makers on Flipboard have the latest on the victims, the history of Ebola and a look back at some of the most deadly pandemics. 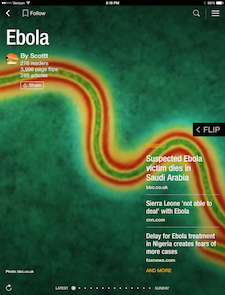 Ebola by Scott: What areas are experiencing the largest outbreaks? What resources are being deployed to combat the spread? Get your questions answered here. 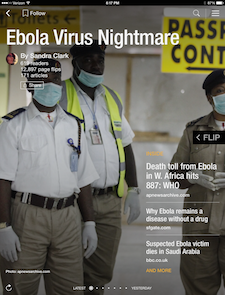 Ebola Virus Nightmare by Sandra Clark: The race is on to find a cure. Are we close? Read about the latest treatments. 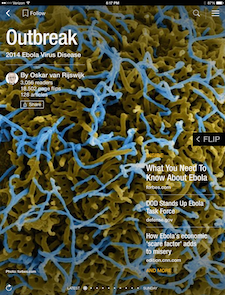 Outbreak by Oskar van Rijswijk: The Ebola news you might not see otherwise. A traveler’s guide to the outbreak, which Twitter accounts you should follow for the latest, and who’s on the ground to fight the spread. 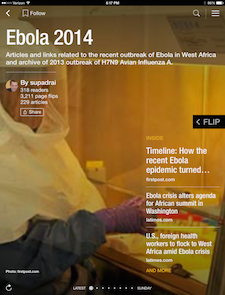 Ebola 2014 by supadrai: Ebola is the latest disease to have a large impact, but it isn’t the first. This magazine looks into the latest on Ebola and the Avian Flu outbreak in summer 2013. 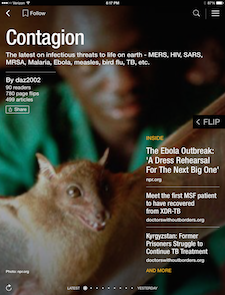 Contagion by daz2002: MERS, HIV, SARS, malaria, Ebola, measles, Bird Flu—these are diseases that impact hundreds, thousands and sometimes millions. Now you can learn about each one, in one place. 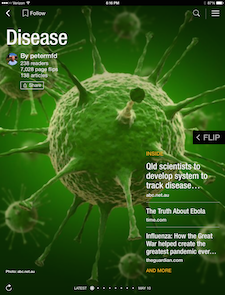 Disease by petermfd: People and organizations dedicate their lives to helping fight diseases. Read about vaccine discoveries and the latest technologies to improve your health.