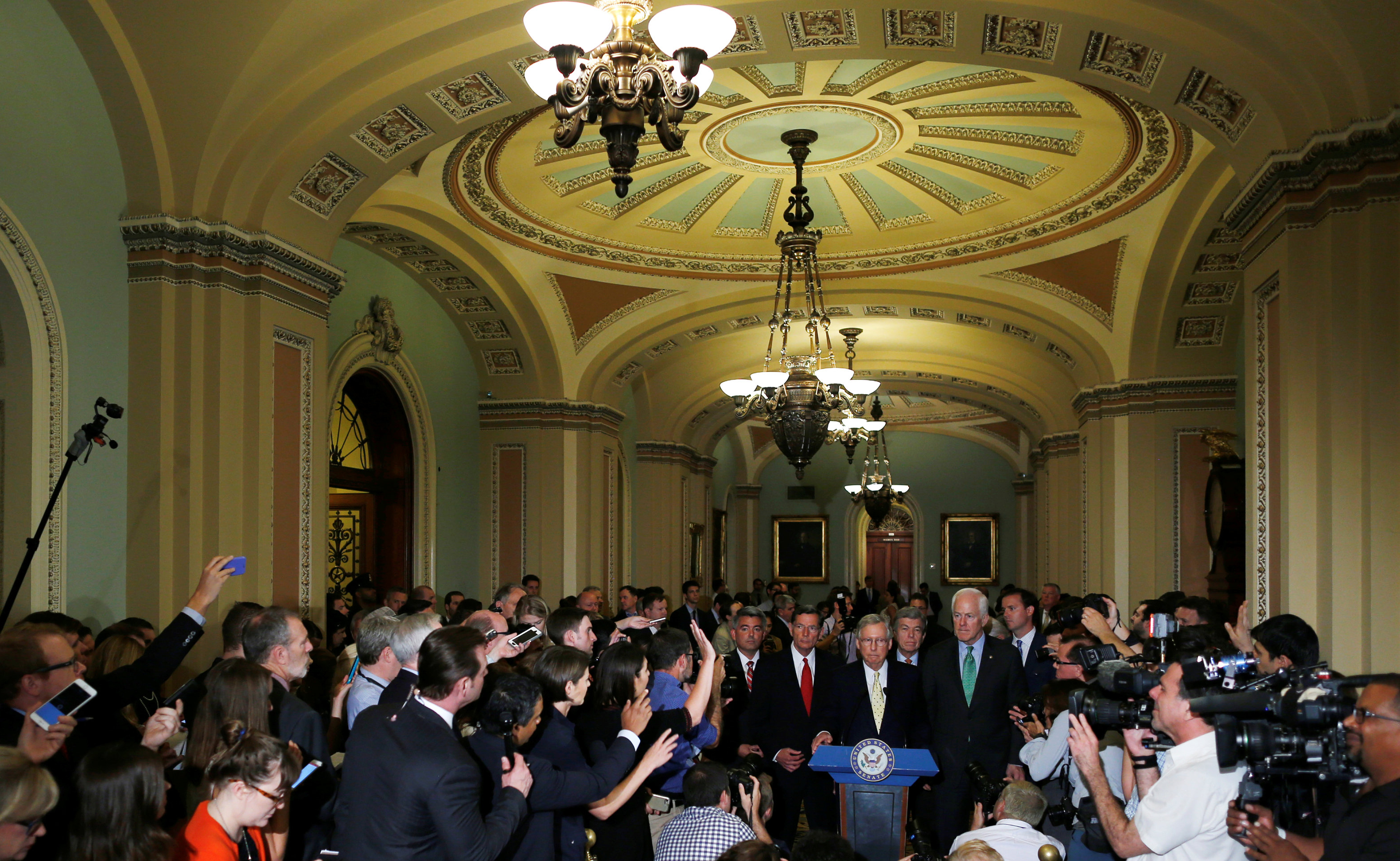 A serious blow was meted out to Donald Trump’s legislative agenda this week when efforts to repeal and replace the Affordable Care Act came to a halt. The Republican-controlled Senate failed for the second time to pass the health care bill, after the House narrowly passed a version in May.

Known as the Better Care Reconciliation Act (BCRA), the Senate bill had a history of disputation and fell out of favor with moderate and conservative Republicans even after several re-drafts. Supporters said that the measure will improve the market by helping people acquire cheaper insurance plans that are less exhaustive than the ones listed under the current act. Critics argued the bill expects low-income families to pay more for less coverage.

The bill needed at least 50 votes to clear the next legislative hurdle, a number that was out of reach after Republican Senators Mike Lee (R-Utah) and Jerry Moran (R-Kansas) voiced their opposition. Their decision put an end to the possibility of a debate on the bill.

“We should not put our stamp of approval on bad policy. Furthermore, if we leave the federal government in control of everyday healthcare decisions, it is more likely that our healthcare system will devolve into a single-payer system, which would require a massive federal spending increase,” Moran said in a statement.

This came after Senator Susan Collins (R-Maine) and Senator Rand Paul (R-Kentucky) decided not to back the bill. Senator Dean Heller (R-Nevada) and Senator Rob Portman (R-Ohio) were also skeptical about starting debate on the legislation without more information.

Trump took to Twitter to express his displeasure and called for legislating the Obamacare Repeal and Reconciliation Act (ORRA), another health care bill that looks to repeal Obamacare without a replacement in place.

“Republicans should just REPEAL failing ObamaCare now & work on a new Healthcare Plan that will start from a clean slate. Dems will join in!,” Trump tweeted.

“We were let down by all of the Democrats and a few Republicans. Most Republicans were loyal, terrific & worked really hard. We will return! As I have always said, let ObamaCare fail and then come together and do a great healthcare plan. Stay tuned!,” Trump added. 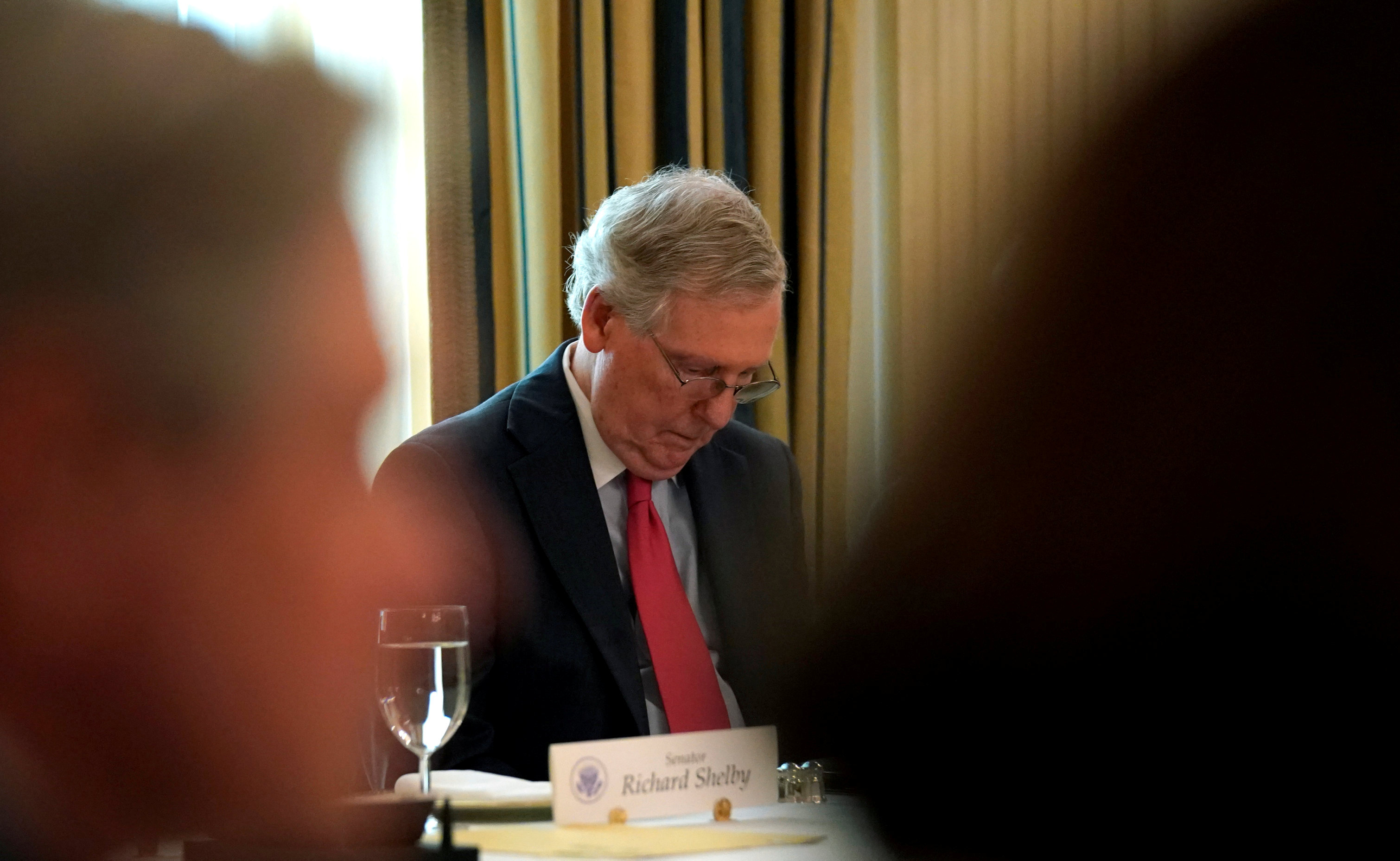 Senate Majority Leader Mitch McConnell (R-Kentucky) shored up Trump’s idea and called for “a repeal of Obamacare with a two-year delay.”

Democratic Leader and Senator Chuck Schumer (D-New York) called for a bipartisan effort, an idea echoed on the other side of the aisle by Senator John McCain (R-Arizona), and asked his colleagues to start afresh.

“This second failure of Trumpcare is proof positive that the core of this bill is unworkable,” Schumer said. “Rather than repeating the same failed, partisan process yet again, Republicans should start from scratch and work with Democrats on a bill that lowers premiums, provides long-term stability to the markets and improves our health care system.” 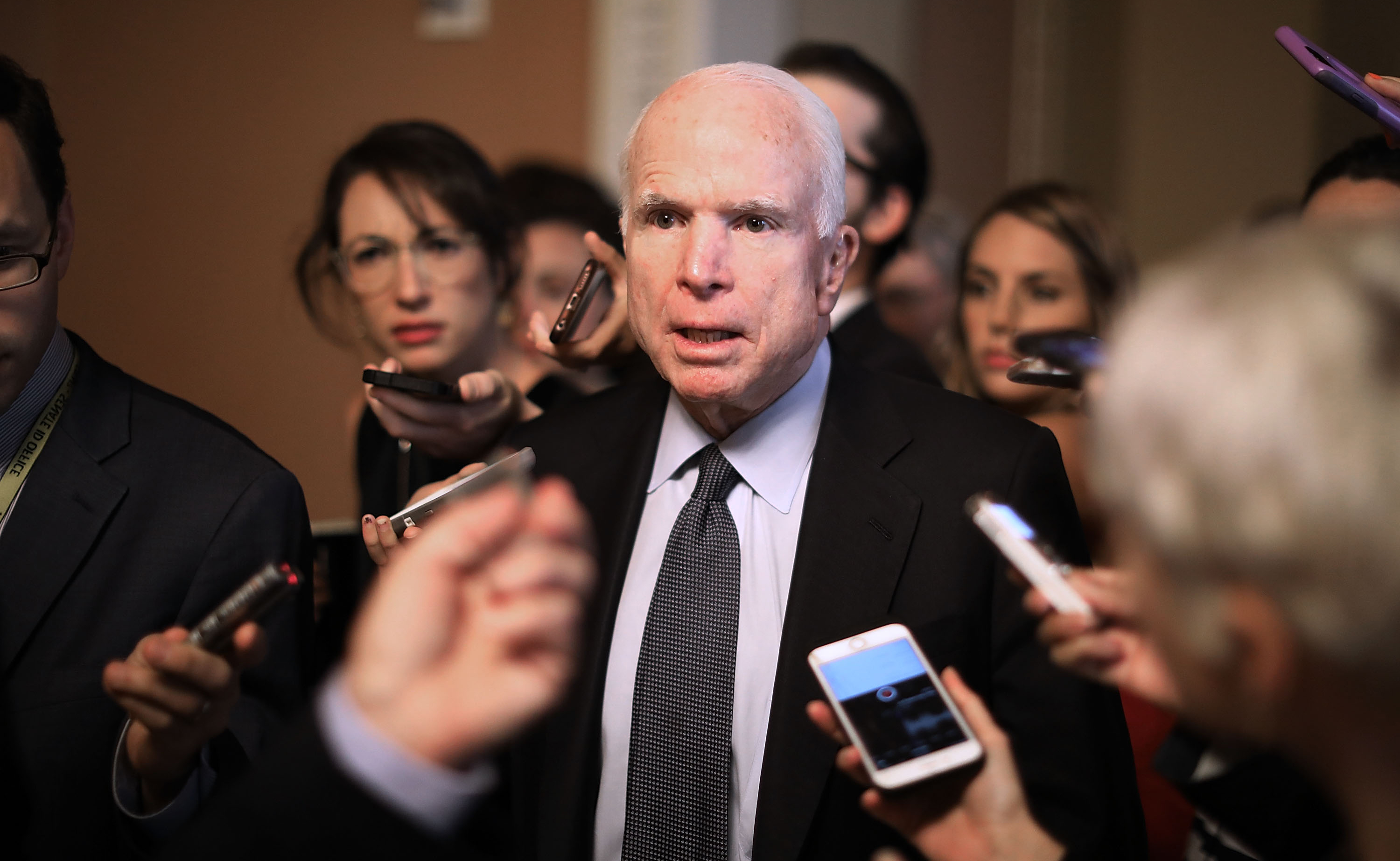 WASHINGTON, DC – JULY 13: Sen. John McCain (R-AZ) leaves a meeting where a new version of a GOP healthcare bill was unveiled to Republican senators at the U.S. Capitol July 13, 2017 in Washington, DC. The latest version of the proposed bill aims to repeal and replace the Affordable Care Act, also knows as Obamacare. (Photo by Chip Somodevilla/Getty Images)

Last week, McConnell stalled the vote because McCain wasn’t in Washington. The senior Arizona senator and former GOP presidential nominee was at the Mayo Clinic Hospital in Phoenix recovering from surgery to remove a blood clot above his left eye. However, news later broke that the veteran senator was diagnosed with a primary glioblastoma, a type of brain tumor.

There have since been fresh talks of reviving efforts to legislate the health care bill next week.

Two reports by the Congressional Budget Office (CBO), a nonpartisan federal agency that provides budget and economic information to Congress, were released mid-week. According to the analysis, 22 million Americans will lose insurance within a decade if the latest draft of the Better Care Reconciliation Act becomes law. The report also suggested the current version of the bill will reduce premiums and lower deficits.

Another report by the CBO projected 17 million fewer people will have insurance within one year and 32 million will lose insurance by 2026, if Obamacare is repealed without a replacement. The report also said premiums will jump by 25 percent, and insurers would pull out of counties across the country.

Notwithstanding renewed efforts to resurrect the health care overhaul, confusion reigns supreme about both bills as they appear to lack votes for a passage.

Keep up with the latest developments from the Senate on health bill(s) via these magazines and topics on Flipboard:

Health Care in America: A Vox Deep Dive:  How many health bills in play, which senators opposed the bill, what the insurance agencies are saying and more, via Vox.

Donald Trump: Keep abreast of the latest policy decisions, interviews, quotes and tweets of the 45th President of the United States.

U.S. Congress: Follow the latest updates coming out of Washington.

Health Insurance: Everything you need to know about health insurance—find out here!

The Trump Administration: Track the latest developments from Team Trump