The Week In Review: Total Solar Eclipse Enthralls the U.S. 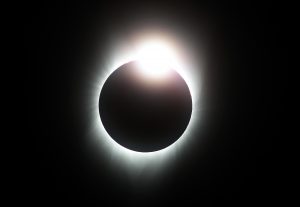 CASPER, WY – AUGUST 21: A total eclipse with the ‘diamond ring’ effect is seen from South Mike Sedar Park on August 21, 2017 in Casper, Wyoming. Millions of people have flocked to areas of the U.S. that are in the “path of totality” in order to experience a total solar eclipse. During the event, the moon will pass in between the sun and the Earth, appearing to block the sun. (Photo by Justin Sullivan/Getty Images)

Millions of people across the U.S. looked up at the sky in wonder this week, as the Sun, the Moon and the Earth aligned, resulting in a total solar eclipse.

Billed as a spectacle-of-a-lifetime, the total solar eclipse was seen from coast to coast in the U.S. for the first time in nearly a century.

From Oregon to South Carolina, 14 states across the U.S fell in the 70-mile-wide “path of totality,” experiencing complete darkness in the middle of the day for about two minutes on August 21st. The grand show took place in the span of two hours, traveling from the west to the east coast. A partial eclipse was visible all across North America.

A solar eclipse occurs when the moon blots out the light of the sun from reaching the Earth. According to NASA, “For a total eclipse to take place, the sun, moon and Earth must be in a direct line.”

The sheer fact that that the moon, which is much smaller in size than the sun, is even able to conceal the massive ball of light, is simply remarkable.

What makes this cosmic event so spectacular despite the fleeting nature of the phenomenon is that the sun’s invisible outer atmosphere, also known as the sun’s corona, surfaces when the moon blocks the giant star, albeit momentarily.

The eclipse also provided an opportunity to space scientists and heliophysicists to study the sun and conduct experiments. Since it’s nearly impossible to observe the sun at such close proximity with the help of space telescopes, the solar eclipse provided a great prospect for scientists to research the corona and space weather in different wavelengths.

“Instead of being able to collect data from one spot or for just a few minutes, this eclipse is providing that window of opportunity to observe the corona over a long period of time,” said Madhulika Guhathakurta, NASA’s lead scientist for the eclipse. “This is also an opportunity to test out novel instruments and our models also to see how well are they working. And it’s scientifically important because of this sun, moon and Earth connection,” Guhathakurta added.

“Eclipse 2017 provides an incredible opportunity to engage the entire nation and the world, inspiring learners of all ages who have looked to the sky with curiosity and wonder,” said Steven Clarke, director of NASA’s Heliophysics Division in Washington.

While Americans traversed long distances to get a glimpse of the rare celestial event, six extremely fortunate individuals watched the umbra or the moon’s shadow aboard the International Space Station, from a “vantage point 250 miles above the Earth.”

According to many estimates, this eclipse might have been the most watched in history, with 4.4 million viewing the eclipse on NASA’s live stream itself.

During the eclipse, President Trump stared briefly at the sun sans any protective glasses/lenses as one of the aides shouted “don’t look.” Joined by first lady Melania Trump and their son Barron on the Truman Balcony at the White House, Trump later wore protective eyewear.

On the economic front, several reports suggested that the eclipse would cost at least $694 million in lost productivity. However, that number is hard to substantiate.

Per reports by MarketWatch and USAToday, the event brought in tens of millions of dollars from eclipse-related tourism.

Scientists, eclipse chasers and other enthusiasts will be able to experience the next solar eclipse in 7 years, as it is scheduled to take place on April 8th, 2024.

While you wait for the next celestial event to happen, follow these magazines and topics via Flipboard.

Solar Eclipse: Look back at/relive all that happened during the Great American Solar Eclipse 2017 via this magazine.

Space: Discover the wonders of the cosmos right here.

NASA: Be on top of every story coming out of the The National Aeronautics and Space Administration.

Science: Keep abreast of the latest studies, experiments and advancements in the field of science.

Astronomy: Whether you are a budding astronomer or just curious about matters of the universe, track the latest via this topic.

~SonaliK is browsing through the City Guides.