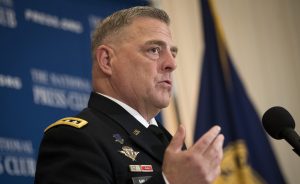 WASHINGTON, DC – JULY 27: General Mark Milley, Chief of Staff of the U.S. Army, speaks at the National Press Club, July 27, 2017 in Washington, DC. Milley fielded questions regarding President Trump’s recent announcement that transgender troops will no longer be allowed to serve in the U.S. military in any capacity. (Photo by Drew Angerer/Getty Images)

In a move that left transgender troops in a state of flux this week, President Donald Trump sought to ban transgender people from enlisting and serving in the U.S. armed forces.

The announcement came via a series of tweets Wednesday morning, which caught many in Washington and at the Pentagon off guard.

“After consultation with my Generals and military experts, please be advised that the United States Government will not accept or allow Transgender individuals to serve in any capacity in the U.S. Military. Our military must be focused on decisive and overwhelming victory and cannot be burdened with the tremendous medical costs and disruption that transgender in the military would entail. Thank you.,” Trump tweeted.

The tweets signalled a departure from the year-old policy that was put in place by then-Secretary of Defense Ash Carter, who scrapped restrictions on transgender soldiers and allowed them to serve openly in the military.

A report by the New York Times indicated that the Secretary of Defense James Mattis was only given a day’s notice of the president’s intentions and was “appalled” by the manner in which changes to the policy were unveiled. Another report by CNN suggested that the U.S. Joint Chiefs, including chairman General Joseph Dunford, were caught unaware by this development.

On Thursday, Marine Corps Gen. Joseph Dunford, chairman of the Joint Chiefs of Staff, sent out an internal memo to the service members which stated that, “I know there are questions about yesterday’s announcement on the transgender policy by the President. There will be no modifications to the current policy until the President’s direction has been received by the Secretary of Defense and the Secretary has issued implementation guidance. In the meantime, we will continue to treat all of our personnel with respect. As importantly, given the current fight and the challenges we face, we will all remain focused on accomplishing our assigned missions.”

White House defended the decision during the press briefing on Wednesday. When asked if transgender service members who are currently deployed will be discharged from the military, White House press secretary Sarah Huckabee Sanders said that the Department of Defense and the White House will work together to ensure implementation is done lawfully and chalked up the decision to the policy being expensive.

In 2016, a report by the RAND Corporation titled ‘Assessing the Implications of Allowing Transgender Personnel to Serve Openly’ analysed the health care costs of gender-transition treatments, one of the main points of contention between supporters and critics of the policy.

Out of the 1.3 million active duty service members, the report estimates anywhere between 1,320 and 6,630 individuals may be transgender.

According to its findings, “only a subset will seek gender transition–related treatment. Estimates derived from survey data and private health insurance claims data indicate that, each year, between 29 and 129 service members in the active component will seek transition-related care that could disrupt their ability to deploy.”

It further stated that the “active-component health care costs would increase by between $2.4 million and $8.4 million annually, representing a 0.04- to 0.13-percent increase in active-component health care expenditures. Even upper-bound estimates indicate that less than 0.1 percent of the total force would seek transition-related care that could disrupt their ability to deploy.” 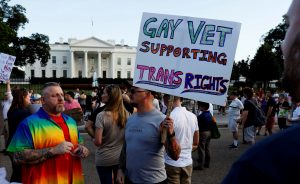 Demonstrators gather to protest President Donald Trump’s announcement that he plans to reinstate a ban on transgender individuals from serving in any capacity in the U.S. military, at the White House in Washington. REUTERS/Jonathan Ernst

Senator John McCain (R-Arizona), who is the chairman of the Senate Armed Services Committee, released a statement saying, “Any American who meets current medical and readiness standards should be allowed to continue serving. There is no reason to force service members who are able to fight, train and deploy to leave the military — regardless of their gender identity.”

However, some Republicans supported Trump’s decision arguing it put a cost burden on the military. Many social and Christian conservatives also backed Trump and welcomed his decision.

“I’m pleased to hear that President Trump shares my readiness and cost concerns, and I’m glad the President will be changing this costly and damaging policy. Military service is a privilege, not a right. We must ensure all our precious defense dollars are used to strengthen our national defense. Now, we can focus on rebuilding our military and addressing the growing threats around the world,” said Vicky Hartzler, (R-Missouri).

As opponents decry discrimination and proponents cite potential economic benefits of the transgender ban, follow the latest policy shifts via these Flipboard topics and magazines:

LGBTQ: Delve deeper to understand the issues faced by the LGBTQI community

U.S armed forces: Track the latest about our men and women in uniform

The Trump Administration: Never miss the latest on Trump’s White House by following this magazine

Pentagon: Check out the primer on the Department of Defense right here

~SonaliK is enjoying 10 for Today