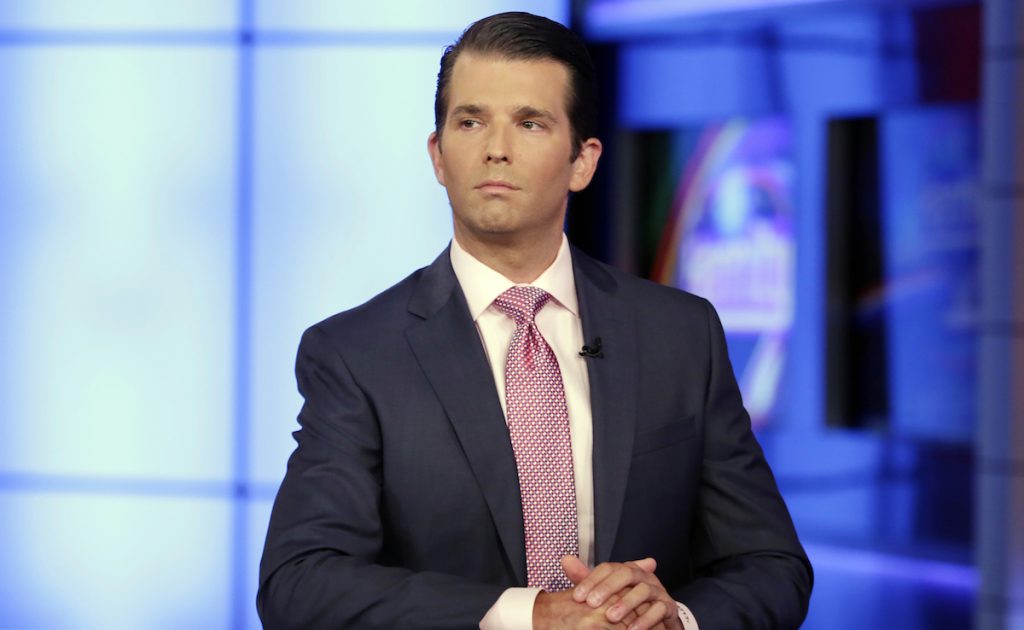 The White House was embroiled in another controversy this week as Donald Trump Jr., the oldest son of Donald Trump, revealed he participated in a meeting with a Russian lawyer.  Natalia Veselnitskaya, an attorney who is believed to have ties to the Kremlin, met with Trump Jr. after help to his father’s campaign was offered.

According to Trump Jr., Rob Goldstone, a British publicist and former tabloid journalist, was responsible for setting up the meeting with Veselnitskaya on June 9, 2016 at Trump Tower in New York. Jared Kushner, President Trump’s son-in-law and senior adviser and Paul Manafort, then-campaign chairman, are believed to have attended the meeting. On Friday, news organizations further reported that Rinat Akhmetshin, a Russian-American lobbyist and former Soviet counterintelligence officer, also accompanied Veselnitskaya.

Akhmetshin rejected allegations of being a spy and called it a “smear campaign.”

“At no time have I ever worked for the Russian government or any of its agencies. I was not an intelligence officer. Never,” Akhmetshin told the Washington Post. “I never thought this would be such a big deal, to be honest.”

Goldstone first approached Trump Jr. via e-mail, offering to “provide the Trump campaign with some official documents and information that would incriminate Hillary [Clinton] and her dealings with Russia. This is obviously very high level and sensitive information but is part of Russia and its government’s support for Mr. Trump,” he wrote to Trump Jr. Trump Jr. replied, “If it’s what you say I love it.” 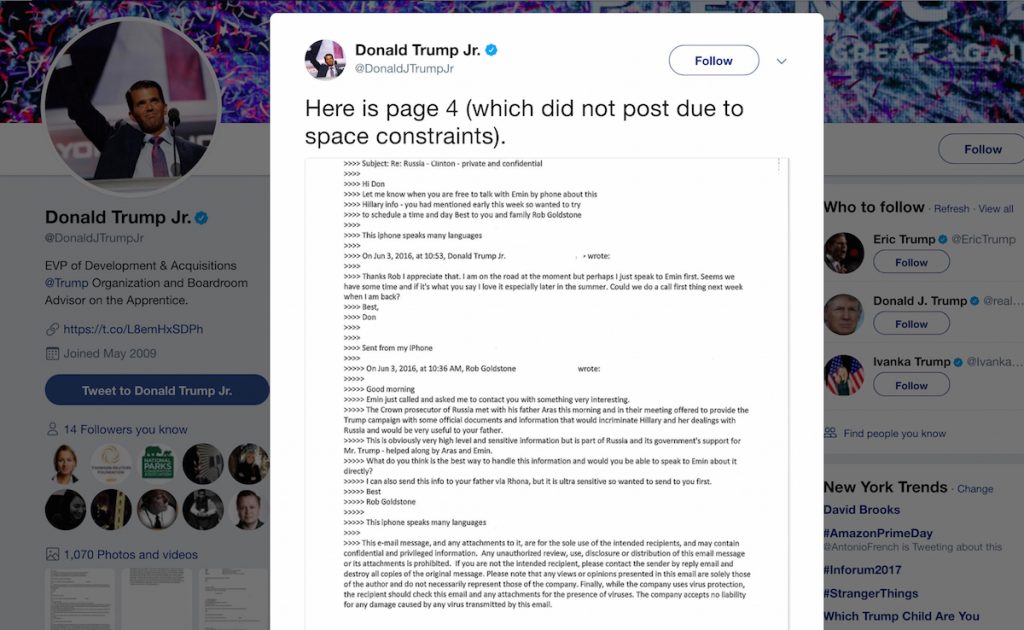 Part of an email conversation between Donald Trump Jr. and publicist Rob Goldstone is seen in a Twitter message posted by Trump Jr. on July 11, 2017. @DonaldJTrumpJR/Handout via REUTERS

In an interview with Fox News, Trump Jr. said, “In retrospect, I probably would have done things a little differently. My takeaway when all of this was going on is that someone has information on our opponent. I wanted to hear them out and play it out. This was 13 months ago, before I think the rest of the world was talking about that, trying to build up that narrative on Russia.”

Contradicting Trump Jr.’s account of the events, Veselnitskaya said in an interview with NBC News, “I never had any damaging or sensitive information about Hillary Clinton. It was never my intention to have that. It is quite possible that maybe they were longing for such an information. They wanted it so badly that they could only hear the thought that they wanted.”

President Trump, who was in Paris for Bastille Day celebrations, backed his son at a news conference and dismissed concerns about the meeting by calling it “opposition research.”

“My son is a wonderful young man,” Trump said. “He took a meeting with a Russian lawyer, not a government lawyer but a Russian lawyer. From a practical standpoint, most people would have taken that meeting. It’s called opposition research or even research into your opponent. Politics is not the nicest business in the world, but it’s very standard, where they have information and you take the information. Nothing happened from the meeting. Zero happened.”

Speaking to CNN, Republican Sen. Chuck Grassley (R-Iowa) on Thursday said he is inviting Donald Trump Jr. to testify before the Senate Judiciary Committee and is willing to subpoena him if necessary.

Sen. Mark Warner (D-Virginia), who is the member of the Senate Intelligence Committee, said the committee requested additional documents from Kushner and Trump Jr. because Kushner failed to disclose three meetings on the forms submitted for the purpose of investigation.

“Again, I think it’s not appropriate to go through the type of documents requested but we think it’s very important that we have all of the appropriate information so we can ask the right questions. It seems strange to me that those meetings were at least conveniently forgotten, at least by Mr. Kushner,” Warner said.

As the investigation(s) into Russia widens, follow all the latest updates via these Flipboard topics and magazines.

People in the News: Trump’s election brought an influx of new faces and personalities to Washington, D.C. Track the impact they are making and see who else is making waves in the news.

The Trump Administration: From the speeches to the executive orders, follow the steps taken by the president and his administration.

Robert Mueller: The Justice Department Special Counsel is at the helm of the Russia probe. Learn where the investigation leads.

Opinions: Get analysis on the biggest news stories with this magazine that has opinions from the left, right and the center.

U.S. Congress: Track the latest buzz coming from the Hill

News of Russia by Leon A: An in-depth look at the country who is at the center of the controversy