The Week In Review: Trump seeks to end DACA with a six-month delay 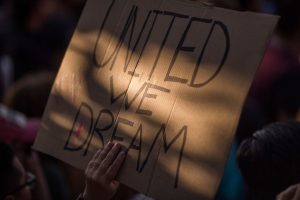 LOS ANGELES, CA – SEPTEMBER 05: Immigrants and supporters march to oppose the President Trump order end to DACA on September 5, 2017 in Los Angeles, United States. The Obama-era Deferred Action for Childhood Arrivals program protects young immigrants who grew up in the U.S. after arriving with their undocumented parents from deportation to a foreign country. The executive order by the president removes protection for about 800,000 current ‘dreamers’, about 200,000 of whom live in Southern California. Congress has the option to replace the policy with legislation before DACA expires on March 5, 2018. (Photo by David McNew/Getty Images)

Immigration reform became the focal point of the news this week when President Donald Trump announced his decision to end DACA, a program that protects individuals who came to the U.S. illegally as children. The move created uncertainty and confusion over the fate of 800,000 Dreamers who were accorded provisional protections and respite from deportation.

The White House announced they will phase out the program over the next six months, providing Congress a fleeting window of opportunity within which to find a permanent solution to the dilemma faced by the Dreamers.

The Deferred Action for Childhood Arrivals (DACA) program was instituted in 2012 under President Obama, which allowed individuals who were brought illegally to the U.S. as children, to apply for a renewable two-year visa, enabling them to temporarily live, work and study legally in the country.

In order to be eligible for the program, individuals had to meet rigorous requirements laid out by the government. They had to have arrived in the U.S. before 16 years of age and lived in the country continuously since June 15, 2007 and couldn’t have been older than 30 before June 15, 2012 when the policy was enacted. In addition, applicants must have been enrolled in school, have a high school diploma or be a military veteran to qualify for the program. They were then vetted for any criminal history and were required to have a ‘mostly clean’ criminal record.

On Thursday, Trump, acting on one of his core campaign promises to address immigration reform, tweeted, “Congress, get ready to do your job – DACA!” The tweet came just ahead of the formal announcement by Attorney General Jeff Sessions that the Justice Department intended to rescind the policy.

WASHINGTON, DC – SEPTEMBER 05: U.S. Attorney General Jeff Sessions speaks on immigration at the Justice Department September 5, 2017 in Washington, DC. Sessions announced that the Trump Administration is ending the Obama era Deferred Action for Childhood Arrivals (DACA) program, which protect those who were brought to the U.S. illegally as children, with a six-month delay for the Congress to put in replacement legislation. (Photo by Alex Wong/Getty Images)

Slamming President Barack Obama and his administration over DACA, Sessions issued a statement at a press conference saying, “The Department of Justice has advised the president and the Department of Homeland Security that DHS should begin an orderly, lawful wind down, including the cancellation of the memo that authorized this program.”

“This policy was implemented unilaterally to great controversy and legal concern after Congress rejected legislative proposals to extend similar benefits on numerous occasions to this same group of illegal aliens,” Sessions said. “Such an open-ended circumvention of immigration laws was an unconstitutional exercise of authority by the Executive Branch.”

Elaine Duke, the acting U.S. Secretary of Homeland Security, said in a press release, “This administration’s decision to terminate DACA was not taken lightly. The Department of Justice has carefully evaluated the program’s constitutionality and determined it conflicts with our existing immigration laws.”

Citing officials, CNN and NBCNews reported that the program won’t accept new applications. However, protections will hold for current DACA recipients and work permits shall be honored until they expire.

The decision was met with protests across the country and the condemnation came from several fronts, including, tech and business executives, college presidents, immigration activists, Democrats and some Republicans.

Facebook CEO Mark Zuckerberg wrote a statement on the social media platform saying, “It is particularly cruel to offer young people the American Dream, encourage them to come out of the shadows and trust our government, and then punish them for it.”

Apple CEO Tim Cook tweeted, “250 of my Apple coworkers are #Dreamers. I stand with them. They deserve our respect as equals and a solution rooted in American values.”

Google CEO Sundar Pichai said in a tweet, “Dreamers are our neighbors, our friends and our co-workers. This is their home. Congress needs to act now to #DefendDACA. #WithDreamers”

Trump issued two more tweets the next day, directing them at the Congress again. “Congress now has 6 months to legalize DACA (something the Obama Administration was unable to do). If they can’t, I will revisit this issue!”

“I look forward to working w/ D’s + R’s in Congress to address immigration reform in a way that puts hardworking citizens of our country 1st,” added Trump in a second tweet.

On the economic front, “ending DACA could reduce the size of the U.S. economy by anywhere from $280 billion to $430 billion over the next decade,” per reports by Time.com.

According to the fact checks conducted by NBCNews, DACA doesn’t set up undocumented immigrants on a path to citizenship or permanent residency. Instead, the program only provides temporary relief to its recipients from deportation. Dreamers are ineligible for welfare and Medicaid but can obtain driver’s licenses. In some states, DACA grantees qualify for in-state college tuition rates and certain states allow low-income Dreamers to access healthcare.

Calling the decision “self-defeating,” Obama issued a statement on Facebook.

“These Dreamers are Americans in their hearts, in their minds, in every single way but one: on paper,” the former president said. “Ultimately, this is about basic decency. This is about whether we are a people who kick hopeful young strivers out of America, or whether we treat them the way we’d want our own kids to be treated. It’s about who we are as a people – and who we want to be.” 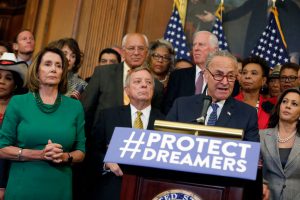 WASHINGTON, DC – SEPTEMBER 6: Senate Minority Leader Chuck Schumer (D-NY) speaks at a news conference as other congressional leaders look on about President Donald Trump’s decision to end the Deferred Action for Childhood Arrivals (DACA) program at the U.S. Capitol September 6, 2017 in Washington, DC. Democrats called for action on young undocumented immigrants that came to the U.S. as children who now could face deportation if Congress does not act. (Photo by Aaron P. Bernstein/Getty Images)

In order to allay the fears and concerns of the people, Trump tweeted on Thursday at the request of House Minority Leader Nancy Pelosi, (Democrat – California), “For all of those (DACA) that are concerned about your status during the 6 month period, you have nothing to worry about – No action!”

As the debate on immigration rages on, track the latest via these magazines and topics on Flipboard.

Immigration: Follow the latest on an issue that divides people across state lines.

U.S. Congress: Will the lawmakers find a lasting solution to the plight of DACA applicants? Keep track of all the buzz from the Hill right here.

Donald Trump: What’s next on the president’s agenda? Be on top of the news from the finest sources on Flipboard.

U.S. Economy: Study the full impact on the U.S. economy if the program ceases to be.

~SonaliK was reading on Hurricane Irma