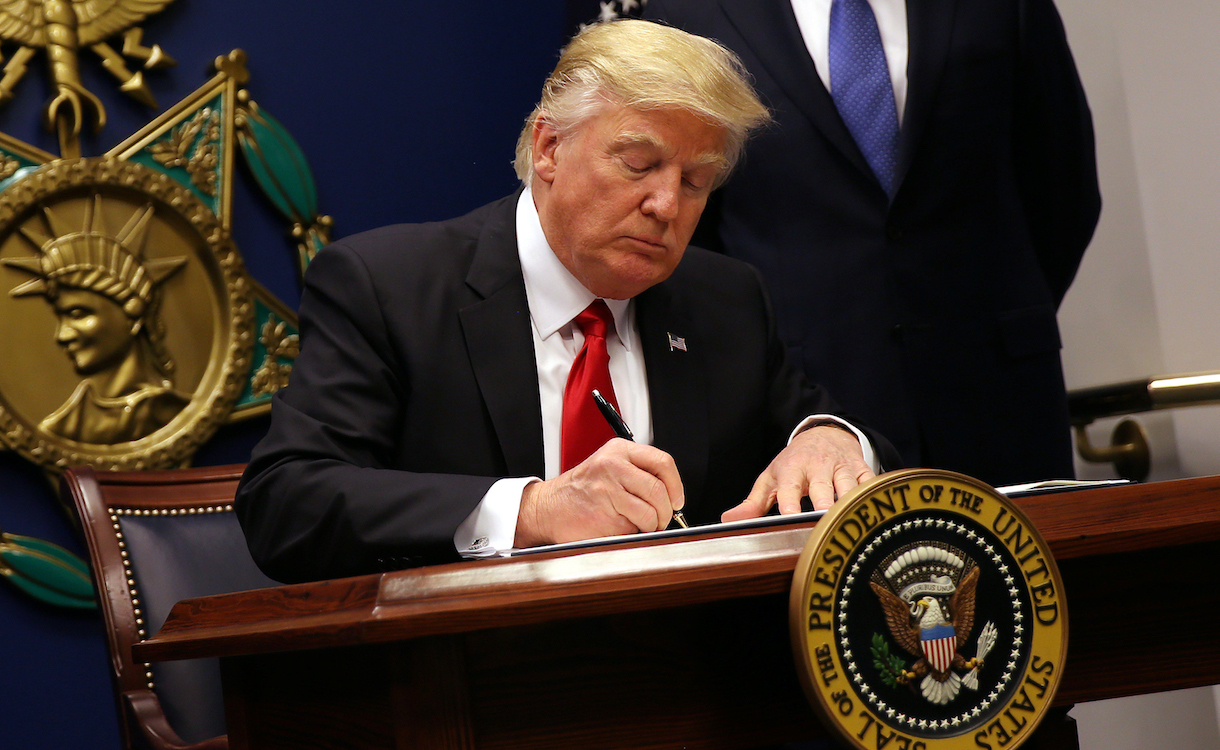 After just a week in office, newly elected President Donald Trump made a controversial announcement last Friday when he unveiled an executive order that bars citizens of seven Muslim-majority countries from entering the U.S. for a period of 90 days.

As well as banning nationals from Syria, Iran, Sudan, Libya, Somalia, Yemen and Iraq, the order also impacts the U.S. refugee system. It suspends the refugee program for 120 days. Trump placed a 50,000 cap on the total number of refugees allowed in the country in 2017, halving the 110,000 aim set by the Obama administration for the year.

During a signing ceremony at the Oval Office, Trump said his “extreme vetting” system would help “keep radical Islamic terrorists out of the U.S.”

Following his announcement, the ban came into immediate effect. Confusion and chaos quickly ensued at airports, which caused protests across the country. Residents in cities including Boston, Philadelphia, New York, Washington, Seattle and Los Angeles took to the streets to march against Trump’s actions.

As thousands flooded to airports to voice their support, Uber announced surge pricing had been turned off at New York’s John F. Kennedy Airport. Many on social media took this to mean Uber was not supportive of the airport protests and out to profit from the situation. The hashtag #DeleteUber quickly began trending on Twitter.

In the wake of the social media disapproval, Uber CEO Travis Kalanick stepped down from Trump’s advisory council Thursday. In a memo to staff he wrote that, “joining the group was not meant to be an endorsement of the President or his agenda but unfortunately it has been misinterpreted to be exactly that.” Other business leaders met with the president Friday.

Leaders from some of the countries on the banned list condemned Trump’s ruling. Iranian Foreign Minister Javad Zarif said Iran would take “reciprocal measures” to protect its citizens as “collective discrimination aids terrorist recruitment.” The Iraqi Foreign Ministry expressed “regret and astonishment” over the “wrong decision” after it has spent many years working alongside the U.S. to fight ISIS.

Former president Barack Obama issued a statement supporting protesters for exercising their right to have their voices heard. He said it was, “exactly what we expect to see when American values are at stake.”

In response to the protests and criticism, Trump issued a statement denying that the order is a ban on Muslims.

“This is not about religion—this is about terror and keeping our country safe,” he said. “There are over 40 different countries worldwide that are majority Muslim that are not affected by this order.”

On Tuesday acting attorney general Sally Yates ordered federal attorneys not to defend the controversial immigration order. Hours later, Trump fired her. A White House press release said Yates had “betrayed the Department of Justice by refusing to enforce a legal order designed to protect the citizens of the United States.”

Later in the week, U.S. District Court Judge James Robart issued a nationwide block on the travel ban. Robart ruled in favor of the attorneys general of Washington state and Minnesota on Friday in response to a lawsuit they brought seeking to overturn Trump’s ban.

The block immediately halted the president’s executive order Friday afternoon and Trump tweeted his reaction Saturday morning. “When a country is no longer able to say who can, and who cannot, come in & out, especially for reasons of safety & security — big trouble!” he wrote.

At the time of writing the State Department announced they were reversing the recent visa revocations, allowing previously banned travelers to enter the U.S.

As the U.S. and its residents continue to take stock of the travel ban, follow all the latest developments via these Flipboard topics and magazines.

Donald Trump: What’s next on the president’s agenda? Find out here

Immigration: Articles covering the implications on immigration changes across the nation

Geopolitics, Diplomacy, and Foreign Policy by sbplama: An in depth look at how the world is reacting to the changes in U.S. politics

Flying: Stories from 36,000 feet by Alex: Read up on how the world of aviation is responding to Trump’s ban

Immigration Policy News by Keith Fitzgerald: Learn more about all the new rulings impacting the U.S.

~JessE is curating Up Close With Fifty Shades of Grey