The Week In Review: U.S. and North Korea Engage in Sharp Rhetoric and Threats 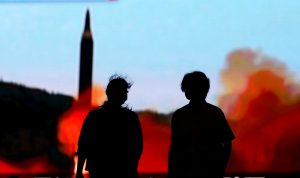 Tensions intensified between the United States and North Korea this week, after the United Nations Security Council voted unanimously to pass a resolution imposing fresh sanctions on the Hermit Kingdom.

The sanctions come in the wake of North Korea’s proliferation of its weapons program and continued missile tests, and are also a direct response to Pyongyang’s violation of previous UN resolutions.

Calling the measure “the strongest sanctions resolution on any country in a generation,” the U.S. approved the resolution with 14 other members of the Security Council.

The economic sanctions aim to hurt North Korea’s revenue streams and prohibit the reclusive nation from exporting coal, iron, iron ore, lead, lead ore and seafood. It’s expected these efforts will cost the North Korean regime $1 billion in annual export revenue. In addition to the embargo on exports, the resolution proscribes foreign investment in North Korea or any joint ventures between the isolated nation and foreign companies. Furthermore, it limits the number of workers the country can send abroad whose remittances act as a vital revenue artery.

North Korea slammed the penalties with a series of retaliatory threats over the course of the week, further exacerbating the already strained relations between the two countries. Tensions peaked after North Korea announced a detailed plan to attack the U.S. Pacific territory of Guam.

Home to 162,896 people, the small island territory also hosts two U.S. military bases—Andersen Air Force Base in the north and Naval Base Guam in the south, and has immense strategic significance to the U.S.

China, an important ally and trading partner of North Korea, discouraged the country from provoking the international community, and later issued a statement in The Global Times newspaper that it won’t come to North Korea’s aid if it launches a preemptive attack on the U.S. However, if the tables were turned and Washington strikes first, China will intervene.

Trump warned North Korea to dial back its rhetoric and said, “North Korea best not make any more threats to the United States. They will be met with fire and fury like the world has never seen.”

His initial comments came on the heels of a report by the Washington Post that stated that “North Korea has successfully produced a miniaturized nuclear warhead that can fit inside its missiles.”

Trump’s statement was met with deep criticism from many in Washington who said his comments sent a mixed message to the world and could aggravate the situation.

Senate Armed Services Chairman John McCain said in a radio interview, “I take exception to the President’s comments because you’ve got to be sure that you can do what you say you’re going to do. The great leaders I’ve seen don’t threaten unless they’re ready to act and I’m not sure President Trump is ready to act.”

Maryland Sen. Ben Cardin, the top Democrat on the Senate Foreign Relations Committee, also denounced the comments, saying “We should not be engaging in the same kind of bluster and provocative statements as North Korea about nuclear war.”

Despite the vocal critics, Trump issued the latest warning via twitter on Friday morning. “Military solutions are now fully in place, locked and loaded, should North Korea act unwisely. Hopefully Kim Jong Un will find another path!,” he wrote.

The U.S. Secretary of State Rex Tillerson sought to allay fears of the American public. “I think what the president was just reaffirming is that the United States has the capability to fully defend itself from any attack, and our allies, and we will do so. So the American people should sleep well at night.”

US Defense Secretary James Mattis said that his intent is to solve the crisis through diplomacy and not military action, and exhorted Kim Jong-un to cooperate with the international community.

Statements throughout the week from North Korea continued to raise the temperature. 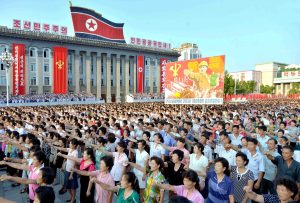 On Sunday, Rodong Sinmun, North Korea’s state-run newspaper issued a warning to the U.S. “The US mainland will sink into an unimaginable sea of fire on the day when it dares to touch our country by stupidly causing mischief and brandishing its nuclear and sanctions clubs,” it said.

On Monday North Korea pledged “thousands-fold” revenge against the U.S. in a statement issued through the Korean Central News Agency (KCNA), a state-run media outlet.

“It’s a wild idea to think the [Democratic People’s Republic of Korea] will be shaken and change its position due to this kind of new sanctions formulated by hostile forces.”

Speaking at the ASEAN Regional Forum on Monday, Ri Yong Ho, North Korea’s Foreign Minister said, “possession of nuclear weapons and intercontinental ballistic missiles is a legitimate option for self-defence in the face of a clear and real nuclear threat posed by the US. We will, under no circumstances, put the nukes and ballistic rockets on the negotiating table.

On Thursday, NBC News reported that “the Pentagon has prepared a specific plan for a preemptive strike on North Korea’s missile sites should President Trump order such an attack.”

The increasing tensions also impacted the global markets as world stocks plummeted for fourth day and saw the worst week since November.

As the bellicose rhetoric continues, track the latest on North Korea and foreign policy via these magazines and topics on Flipboard:

North Korea Nuclear Threat: Is it just heated talk or is the nuclear war an actual possibility? Know everything about the isolated nation through this magazine.

Guam: Track the latest on the tiny island that has been pushed into the spotlight.

Donald Trump: Read an all-inclusive collection of stories about the president from the best news sources on Flipboard.

China: A strategic partner or an adversary? Check out the news coming out of China.

U.S. Military: Keep abreast of all the developments out of Pentagon