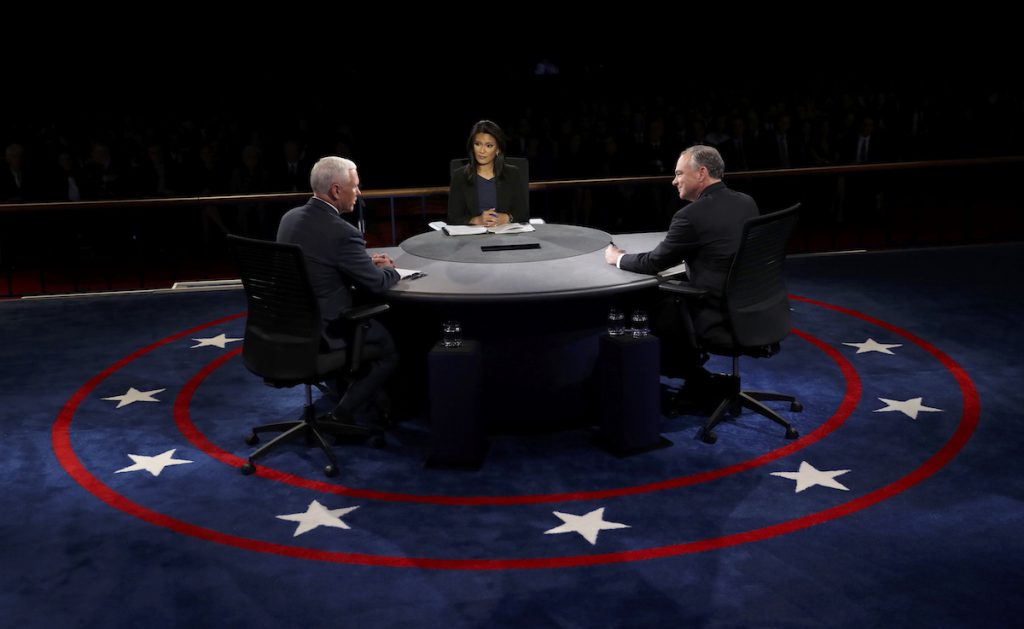 We spoke to CNN Politics Managing Editor Z. Byron Wolf about the biggest moments from the debate, which he described as “awkward.”

Read his full takeaways below and the biggest moments of the night in our 2016 Presidential Debates magazine.

What were Kaine’s best and worst moments?
Kaine lost this debate on style. He continually interrupted Pence and looked agitated compared to Pence, who stayed cool and collected throughout. He even butted into Pence’s somber mention of 9/11. Pence said he was in Washington, D.C. on that day. Kaine interrupted that HE was in Virginia, home of the Pentagon. It was awkward. But Kaine had clearly done his homework. He had ready data points on a host of issues, domestic and international. He seemed, when it comes to Vladimir Putin, to know more about what Pence and Trump had said than Pence did.

What were Pence’s best and worst moments?
Pence had a really hard job: cleanup for Donald Trump. Kaine repeatedly turned and asked him how he could support Trump’s policies—on an immigration deportation force, on nuclear weapons and more. Pence’s strategy was effective in the format. He simply ignored the questions and spoke calmly to moderator Elaine Quijano of CBS News. Did he dodge things he’d rather not answer? Yes. Did he obfuscate on the questions for which he had no clear answer. Absolutely. Did it work on Tuesday night? Sure did.

Did Kaine’s repeated raising of Trump’s past comments land a lasting punch?
This is the perfect follow-up. Because while Pence won on style, he probably will lose the replay war over the next 24 or so hours. The interruptions will soon fade. Pence misstating Donald Trump’s positions on nuclear weapons and Vladimir Putin will be replayed. Pence’s defense was able and his presentation was impeccable, even if he came off like a “high school principal,” according to CNN’s Gloria Borger. But his answers could have lasting implications.

Did Pence effectively defend Trump over his taxes and business?
Not entirely. He argued that Trump had created jobs and contributed to the economy. He didn’t say that Trump had paid his taxes. That’ll be an ongoing element of this campaign and it was in no way settled during Tuesday’s debate.

What was Pence’s most successful critique(s) of Clinton?
There might be other opinions, but Pence was best prepared on foreign policy. Despite his slip-up on Putin, he effectively prosecuted the case against Clinton for not helping create an effective exit strategy for Iraq. If this election turns on American safety, Pence made Clinton seem like a candidate who will not be up to the task. Of course, he did not present a clear argument for how Trump would.

How will tonight’s sparring impact campaigns of Clinton and Trump?
It won’t. At least not a lot. A CNN / ORC poll of debate watchers showed 53% of watchers were unmoved by the debate. It didn’t incline them towards either Trump or Clinton. Trump got a slightly bigger boost—29% said they would be more inclined to support him. Only 18% said they’d be more likely to support Clinton. That said, while Pence won the debate, Kaine got higher marks for defending Clinton.

What are the biggest topics to watch on the campaign trail going forward?
Putin and taxes are going to be big topics in the coming days. Pence totally misstated on one and didn’t have an answer on the other. I’m not sure if anything was raised about Clinton that will stick. Pence was more (and more deftly) on defense.