What Is a Magazine? Five Surprising and Useful Definitions 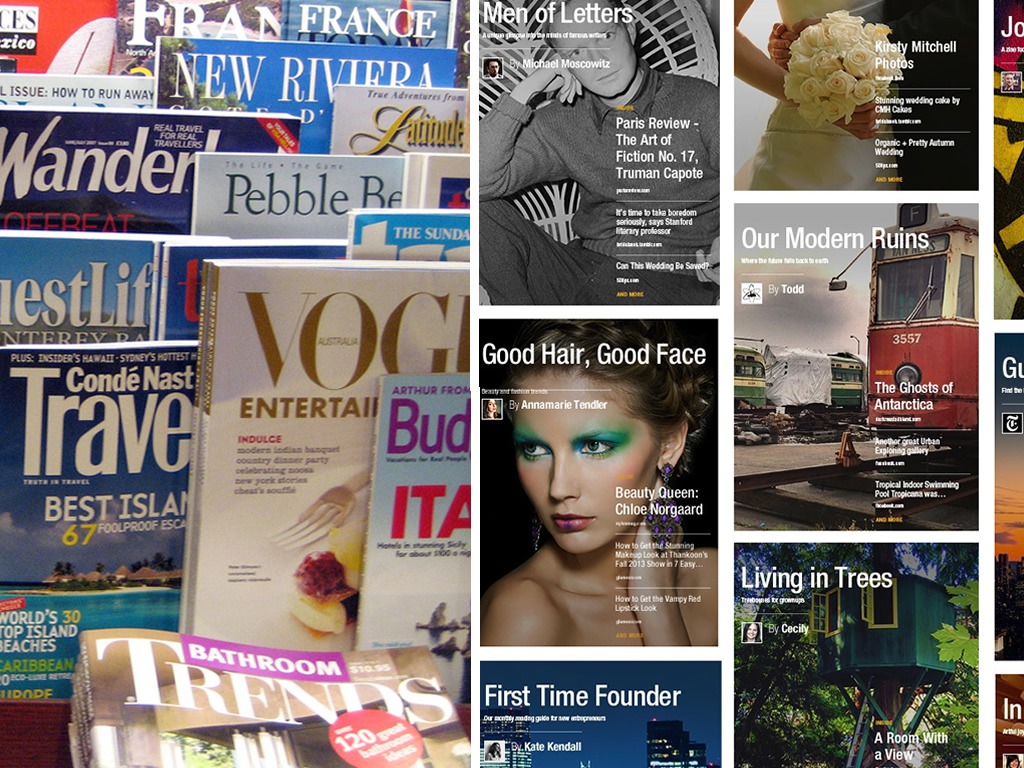 Quick: What is a magazine?

This has always been tricky question to answer, even before the arrival of the Interwebs, smartphones and tablet devices. Magazines have never been static entities, and the history of magazines is basically the story of how the magazine format has been reinvented time and time again to serve different readers at different points in time.

What we know is this: The world’s first self-declared mag was “Gentlemen’s Magazine,”  founded in 1731. We know that the word “magazine” is derived from Arabic word makhazin, or “storehouse,” and was generally meant to mean a collection of somehow-related stuff all bundled together in one package.  Then you had The Economist, and Collier’s, and the Saturday Evening Post, and National Geographic, and Time, and The New Yorker, and Life, and Playboy, and Esquire, and Rolling Stone, and Ms., and People, and Wired and a whole lot of websites… and then things got really weird really quickly.

In the Tablet and Social Media Age, the idea of a “magazine” is returning to its storehouse roots. Functionally, a magazine still represents the idea of a bunch of thematially-related stuff curated together as one package — but just about everything else is up for grabs. Great magazines also contain a magical spark, and that’s where definitions get squishy. If a magazine is something more than just a collection of stuff, then what is that other stuff?

UK-based magazine editor and content strategist Chris Maillard tried to answer that question recently on the terrific Flipping Pages blog by proposing five definitions of what a magazine is right now:

A magazine is a Wunderkammer
In case you’re not up to speed on renaissance German, it’s also known as a Cabinet of Curiosities; a room or display case with interesting, unusual and occasionally eccentric objects, usually collected by one person and displayed as both a conversation piece and an expression of its owner’s wide-ranging and eclectic interests, tastes and travels. They would be full of wondrous things, from native artefacts to stuffed animals (some expertly faked), preserved plants to mineral marvels. The visitor is treated to a fascinating, mind-expanding, unique set of wonders. Isn’t that what a magazine should do?

A magazine is a skeleton
In its essence, a magazine can just be a structure from which you hang various items of interest. Hence the ‘magazine format’ TV show (anyone else old enough to remember Tomorrow’s World, early Top Gear, vintage Good Food, even, lord preserve us, Nationwide?). Radio 4 is often a magazine in itself, with mini-magazines inside it. Woman’s Hour or Woman’s Own? Like a Christmas tree, you start with a basic structure then dangle attractive and shiny things off it to catch the reader’s attention and excite their interest.

A magazine is a trip
It should take you on a journey to somewhere else, show you the sights, give you a relaxing break or an exhilarating adventure and leave you feeling invigorated, refreshed and ready to re-enter your normal reality. It’s a trip to somewhere where you feel at home, but it has enough strangeness to be intriguing and different. And you experience things in a magazine you’d never dream of doing at home. Want to play in that rock band, drive that sports car, walk that red carpet wearing that dress and those shoes? Sure – just pick up that magazine. It’s your ticket to a place where you can.

A magazine is behind the sofa
Or under the stairs. Or in a treehouse. Or anywhere that’s a space of your own, shut out from distractions and annoyances, enclosed and secure. Any regular reader comes to appreciate their magazine as a refuge where they know the subject matter, understand the tone, value the opinions and appreciate the values. It’s their place and they can escape to it whenever they like. Is an online forum actually a magazine? Using that definition, probably.

A magazine is Tonto
The (somewhat non-PC) native guide who knows all the tricks, has a deep knowledge of the area and can sometimes steer you out of trouble. A trusted companion and a faithful friend, your magazine should be there to explain and navigate, full of sage advice and inarguable wisdom. Though the dodgy accent and tribal face paint is strictly optional.

Maillard calls these “talking points rather than cast-iron recipes,” and that seems about right; his five definitions provide general direction and useful goals for any magmaker to aim toward.

Meanwhile, the definition of a magazine remains very much open to interpretation. So what’s your definition? Share it with us via email, and I’ll share the best definitions I receive right here.