A Time in the Desert

If you work in Silicon-something—Valley, Alley, Wadi, Beach, etc.—and your coworkers are disappearing right about now, they might just be finding their chi at Burning Man, also known as T.T.I.T.D., Black Rock City, or Home.

The attraction between Silicon Valley and Black Rock City is far more than a swipe right—it’s a relationship that goes back decades. The first Google Doodle in 1998, after all, was an homage to the Man, the effigy that is at the literal and symbolic heart of the event. Google founders Larry Page and Sergey Brin went to Burning Man to find a new CEO—Eric Schmidt—and Jeff Bezos, Elon Musk, and other moguls have made pilgrimages there, too. (If you want to read about the more controversial side of tech’s invasion, read Nick Bilton‘s 2014 story for The New York Times about how the tech elite try to outdo each other on the playa.)

“Both Black Rock City and Silicon Valley embody a similar cultural ethos—the encouragement of rapid prototyping, a disregard for the status quo and how things have been done before, and the self-reliance to change the world around you for the better.”—Sarah Buhr for TechCrunch

So why do the world’s best-known tech founders and entrepreneurs (and the people who work for them) return year after year? A week in the desert turns out to be the ultimate life hack for people in Techland. (Funny how disconnecting from your phone and spending time with people, communing with art and music, can be so life-affirming.) It’s a hard reboot, a reset, and an enduring reminder of some of the basics that make life as a tech entrepreneur unlike any other.

There’s something about being in the middle of the desert that forces you to return to the basics. It helps when you’re cut off from ubiquitous electricity and wifi. “Being a tech entrepreneur is 24/7: there isn’t a moment that goes by where you’re not connected,” Christian Taylor, the CEO and founder of Chatcast, told us. “To have this week where you can internalize, where every moment is not about checking your email, was, at first, very jarring. I had a lot of anxiety about that the first year…but I realized very quickly that: No, that’s the point.”

Habitués also seek a clean emotional slate on the playa. Falon Fatemi, CEO and founder of Node.io (also the youngest person ever to work at Google), calls Burning Man the “healing experience you may not realize you need.” She found catharsis at the Wall of Shame, where people wrote down, anonymously, what made them feel sad, shameful or insecure. “As I was reading all of the powerful feelings on that wall, I was moved in a joyous way,” she said. “I realized that I am not alone. Writing out my own insecurities on that wall and then watching it be lit on fire was a symbolic way to let go of feelings of self-doubt and shame I didn’t realize I hold.” 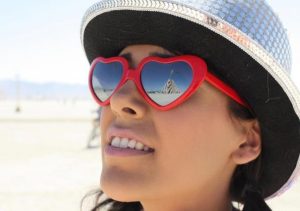 It’s hard enough to survive in the middle of the desert for a week. But try building a 40-foot pink plastic flamingo or a four-story jellyfish made up of 2,000 handmade glass mini-jellyfish. That’s kind of what startup life is like: It’s hard to start any kind of business—but the enterprises that take root in Silicon Valley are often beyond audacious. And they usually start with little more than a crazy idea, zero cash and two jokers working 25 hours a day in their parents’ garage. The way you survive and thrive in the desert is the way you survive in the Valley: choose and marshal your precious resources with Spidey-like attention.

Great businesses have moral codes at their center. So does Burning Man, which codifies its values in the 10 Principles, and includes concepts such as Radical Self-Expression, Radical Inclusion, Civic Responsibility and Immediacy. These are the DNA for living on the playa and—if you buy into them—for life at large. Flipboard CEO Mike McCue, inspired by the teachings of his mentor, the late Bill Campbell, frames these core notions as a startup’s first principles. McCue’s Medium post, “The Most Powerful Lesson I Ever Learned in Business,” is worth a read to understand this more deeply.

Without people working together in a state of flow, there would be no art the size of buildings, no camps larger than a single tent, no cars that look like salamanders, no pop-up city of 70,000 smiley denizens. Collaborative experiences release neurochemicals in one’s brain, and “when all of these chemicals flow through groups at once, you get tighter bonds and heightened cooperation,” according to the book, “Stealing Fire: How Silicon Valley, the Navy SEALs, and Maverick Scientists Are Revolutionizing the Way We Live and Work.”

That emphasis on communal effort (one of the 10 Principles) is part of why plug ‘n’ play camps—where rich people show up with everything all set up for them—have been such an affront to Burning Man culture and haven’t done well for the overall reputation of entrepreneurs on the playa. Asana‘s Dustin Moscovitz penned a fantastic response to this brouhaha when it first erupted a few years ago.

Burning Man is an annual reminder that, given enough imagination and smart collaboration, anything is possible. Says Ryan Junee, the founder of Parsable: “Burning Man really demonstrates that there are people out there with far crazier ideas than you’ve ever imagined—and they can succeed in bringing them to life. This is a pretty amazing thing for entrepreneurs to witness, since we often feel alone, sometimes crazy, and often times doubtful of our ability to be successful in our endeavors.”

Because we love you, here’s a bonus sixth idea to keep in mind as you head to the desert this week:

Startup life can feel chaotic, but there’s a Valley saying, a quote by Mario Andretti, that justifies this: “If everything seems under control, you’re just not going fast enough.” So go fast. Break things. Create chaos. Or, as they say at Burning Man: “Safety third.” 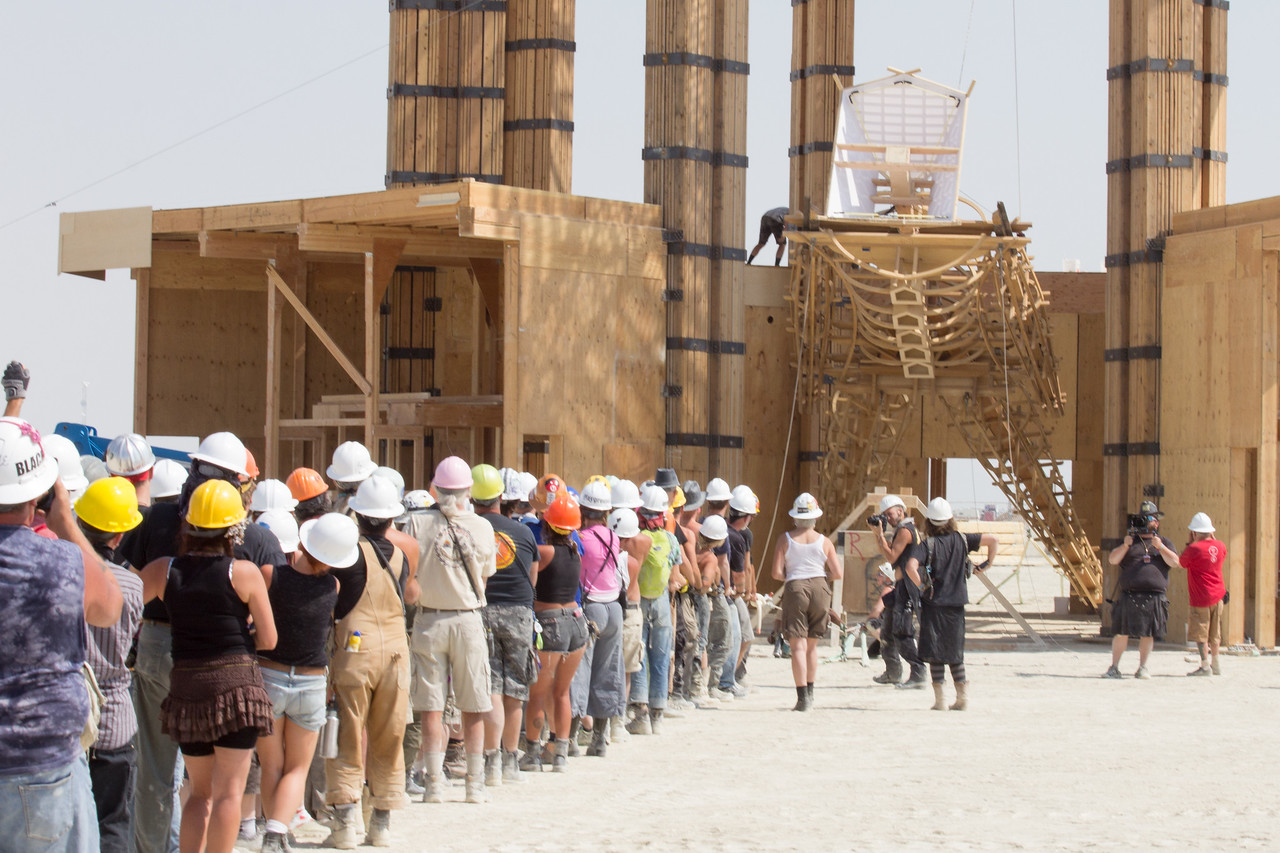 The Man was pulled up the old-fashioned way, by rope, for the first time in 17 years. Photo by Shalaco

Get an audio tour of all the art out there this year. There’s going to be so much cool stuff, like the Tree of Ténéré, a life-like tree in the middle of the desert, with hand-painted bark and 175,000 LEDs on 25,000 leaves—with color that can change 200 times per second, powered by 208 microprocessors. Wow….A 747 as art? Yep, one of Burning Man’s most audacious ideas is getting bigger this year, with more of the plane already installed on the desert floor. Next year, the techie-backed Big Imagination plans to make it a roving art car…Just this week Fast Company wrote about how Shiftpod‘s Christian Weber ushered a Burning Man project into a multi-million dollar business that also helps disaster relief areas globally…Did you know there’s a woman behind Burning Man’s huge tech operation? CameraGirl is her name and Intel did this interesting profile of her and her critical role…KQED has some good ideas for nutritious snacks…Here’s a PDF coloring book on the 10 Principles for the long drive in…This fellow’s compiled 455 sets—54 hours of music!—from last year on SoundCloud. Music for the journey and then some…When they get back to the office, ask your Burner coworkers how it was. You’ll likely get an earful like this… 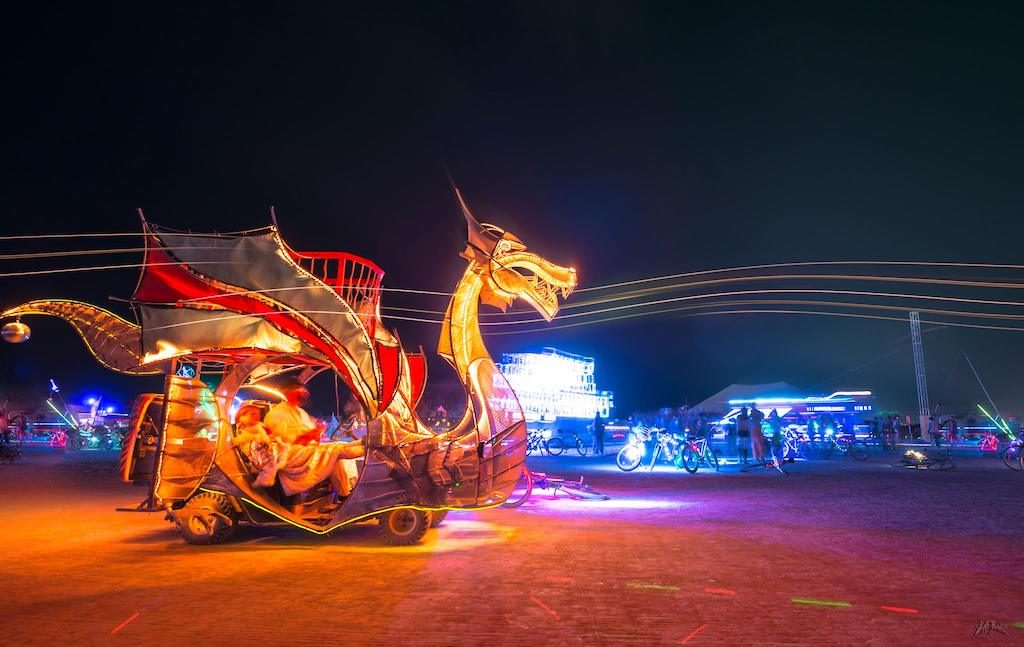