The digital natives are getting restless

You do know that the month formerly known to FM DJs as “Rocktober” has transmuted into a time when we’re supposed to think about “cyber threats,” right? Yes, this Hacktober, change your passwords frequently and be suspicious of stuff you see online and in email (except this one). Let’s all practice safe computing.

“The Internet touches almost all aspects of everyone’s daily life, whether we realize it or not,” the Department of Homeland Security helpfully explains on its website, where it offers more pointers.

Golly, thanks for the heads up, Uncle Sam! But maybe you should have realized sooner that, thanks to the rise of this new-fangled Internet thing, the fundamental way we communicate has changed—and not all of it is the rainbows and unicorns we’d been promised. In fact, life has been a Blade Runner-esque dystopia lately, and we’re all getting fed up.

During the past 18 months, fake news has become a plague. Russia created propaganda, then surgically targeted it at wobbly voters in swing states, via Facebook and Twitter, to influence the last election. Social media has become “weaponized” as Recode pundit Kara Swisher put it at a Vanity Fair conference last week. That apt description first surfaced in an Atlantic article in November 2016, was repeated at a Recode conference in May during a Hillary Clinton interview, and pretty much dominates the tech-versus-culture discussion to this day.

We live in the most technologically connected age in the history of civilization, yet rates of loneliness have doubled since the 1980s. Today, over 40% of adults in America report feeling lonely, and research suggests that the real number may well be higher.—Vice Admiral Vivek H. Murthy, former Surgeon General, writing in Harvard Business Review

We no longer know what to believe, whom to believe, or even how to deliberate so we can fix this mess. When social media isn’t siloing us in our own filter bubbles, we’re bludgeoning each other hatefully online in ways we hardly would in person. That weird connected-disconnected state is even contributing to a loneliness epidemic in the U.S.: In the HBR’s recent cover story, former surgeon general Vivek H. Murthy claims that this modern malaise takes a health toll on each of us equal to smoking about 15 cigarettes per day.

But wait, there’s more. Threats to our “cyber security” are coming at us from every direction. Last week, we learned that the 2013 Yahoo breach yielded personal data from 3 billion user accounts, not the 1 billion that initially had been reported. This is the biggest security breach in history (there are only 7.4 billion people on the planet) and it means that if you had a Yahoo account, your username and unencrypted password are now known to people who could try to use that information to unlock other sites you use. According to The New York Times, at least three known entities paid $300,000 each for that data.

Which is nothing compared to the damage that Equifax wreaked on us, when it failed to take the simplest steps to secure the credit histories of some 145 million Americans. (And yet somehow, during this, the most holy of cyber-security awareness weeks, Equifax was awarded a no-bid contract worth $7.25 million to protect user identities at the Internal Revenue Service.) 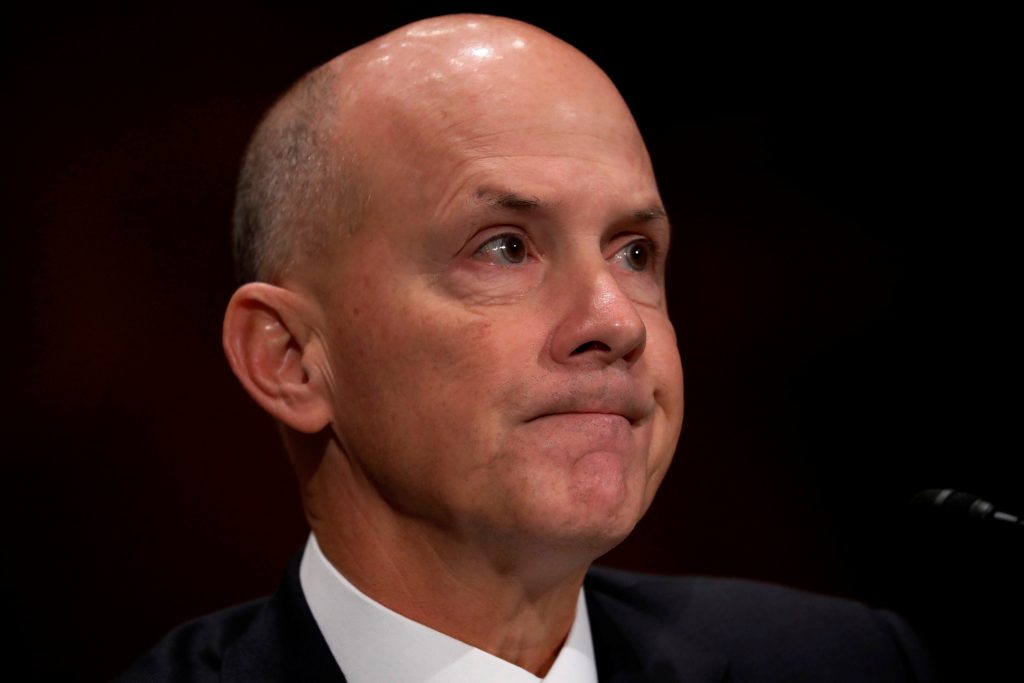 Ah, well. Equifax’s Smith is out, and Facebook CEO Mark Zuckerberg, who initially said that reports of his social network’s manipulation by malign forces were exaggerated, this week offered a genuine mea culpa. He’s taking his company’s truthiness problem seriously, has hired 1,000 people to spot fake ads, and is giving Congress the Russia-bought ads that Facebook published during the General Election.

And yet, we continue to struggle. As recently as the mass shooting in Las Vegas early last week, Facebook (and Google) were doing it again, surfacing bad information—intentional, malicious, false info, in some cases.

This is what happens when we entrust news judgment to algorithms and allow social networks to amplify fake news. I mean, Tom Petty seemed to die twice Monday—once, when everyone from Rolling Stone on down prematurely reported his death, and again nearly eight hours later, when his heart actually stopped, and ours broke. It’s no wonder that, with the Las Vegas massacre and Petty dying, not dying, then dying again, Monday was the “saddest day” ever recorded by Twitter’s sentiment analysis. (If you believe it.)

In my head, the design imperative that we need to prioritize is clear: Develop social, technical, economic, and political structures that allow people to understand, appreciate, and bridge different viewpoints. Too much technology and media was architected with the idea that just making information available would do that cultural work. We now know that this is not what happened. —Danah Boyd, writing in Backchannel

Meanwhile, bots are flooding the Federal Communication Commission’s website with anti-net-neutrality comments. Siri thinks Bulgaria’s national anthem is “Despacito,” a 2017 reggaeton song by Luis Fonsi with Daddy Yankee. And my iPhone 6 acts like it’s unable to wake up from a bad dream, ever since it upgraded to iOS 11…

It sure feels like everything is broken. As someone who has always been a starry-eyed optimist about digital technology, I’d like to think that we’re just going through an awkward phase. We’re still learning. It will all get better.

That said, you should definitely check out that Backchannel piece by Danah Boyd, who argues that simply blaming the big technology platforms is callow. She asserts that the problems we need to address have as much to do with our culture and who we are right now as they do with technology.

I agree, in part, and disagree. Fake news is neither hard to define nor to spot. And while we do have deep cultural issues in this country that go beyond fake news, social media tends to amplify rather than mitigate those rifts. That’s probably fixable, too, given enough time and money. Like so much in Techland, it’s mainly a question of deciding to allocate resources even if they don’t immediately return dollars.

Silicon Valley doesn’t want Congress—this one, especially—to get involved and start regulating this stuff. On the other hand, if the tech industry drags its feet any longer, well, the government is here and it’s here to help. 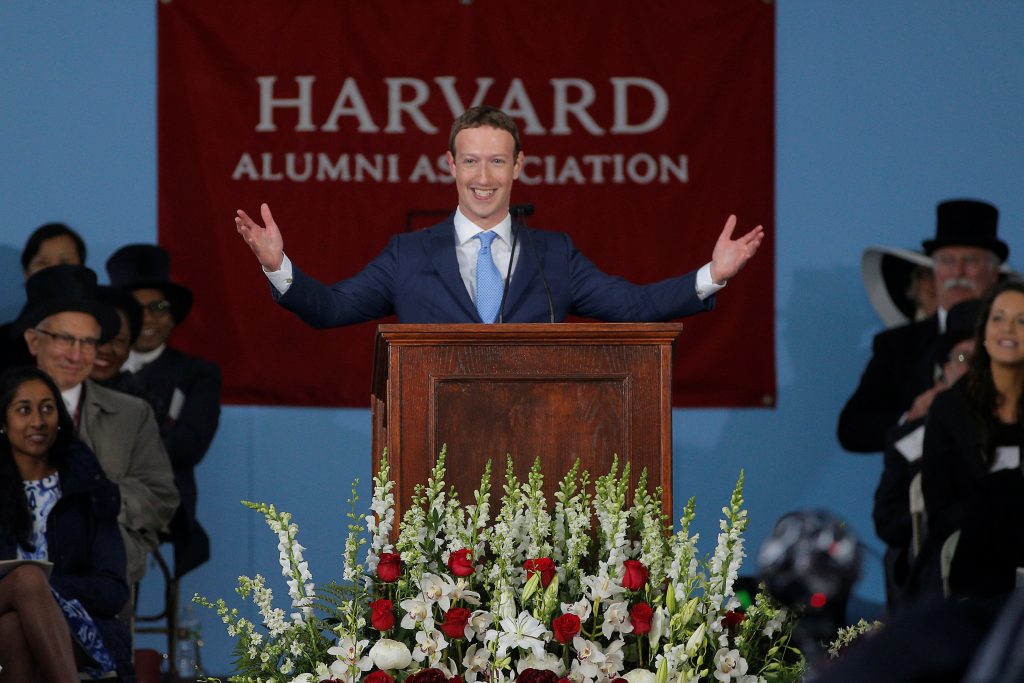 What, me worry? Yup. Facebook founder Mark Zuckerberg at his alma mater, in May. REUTERS/Brian Snyder

Google unveiled a raft of new products last week, but the one that excited the most gadget lust was its adorably named Pixel Pods. These are wireless earphones that allow you to talk, via Google Translate, in real time, to people in 40 different languages…The product unveiling last week that excited me most, though, was unrelated to Google: At long last, the great home audio company Sonos released beta software connecting its wireless speaker system to Amazon’s Alexa. (It also unveiled Sonos One, wireless speakers with Alexa built in, via a mic.) My take: it’s a bit of a let down since it mainly works with Amazon Music at this point and has a hard time understanding voice commands. But it’s still in beta, so it’s bound to improve…The U.S. House of Representatives passed a self-driving car bill that steps up the pace of development and real-world testing. Now we’re really in trouble.