What goes up must come down

Good ol’ Kodak jumped on the blockchain train last week, and its stock rocketed 44% on the news. That was nothing compared to the multiples enjoyed by a raft of small-cap companies—ranging from Rich Cigars (up 1000% at one point) to Long Island Ice Tea—when, somehow, they also managed to embrace cryptocurrency during the past few months.

Then there’s Telegram, a popular encrypted-messaging app. The company is reportedly trying to raise as much as $500 million dollars in March—by issuing its own cryptocurrency. That would be the largest ICO ever, and create a company that could be valued as much as $5 billion.

It turns out that simply knowing how to talk crypto talk, is worth something too in this all-crypto-all-the-time time. Mashable says that working any alt-coin jargon into your pick-up lines will help you find a mate: “All you’ll need is a rudimentary understanding of cryptocurrency. And, if you fancy yourself something of a crypto-expert, your Tinder profile could well be about to blow up.” If your date seems to be going well, maybe play some Crypto Currency Girls, the J-Pop band in crypto-loving Japan, whose members each take the name of a crypto coin such as “Bitcoin” or “Ethereum.” And if it’s going really well,  don’t forget to ask your partner to use this blockchain-based “sexual consent” app.

On the other hand, if you’re more of a spiritual person,  check out JesusCoin, a new currency that promises to “decentralize Jesus.” It’s holding a presale of its new currency in September. Here’s the white paper—go on, take a look.

If we can democratize banking, insurance, gaming and more, than together we can decentralize Jesus. The time has come to do democratize our Lord and Saviour.—From The JesusCoin White Paper

Did you read it? Not likely—if you had, you’d probably see that JesusCoin is just a clever satire. And that’s the point: Though the whole world has been swept up in cryptomania, with millions of people putting their cash into currencies they can barely spell, most “investors” simply don’t take the time to understand the first thing about this stuff. Meanwhile, the market cap for the 1,700 or so altcoins sold on exchanges has reached $750 billion.

Is this a bubble? Yes. Is it going to pop? Absolutely. All bubbles do—but when that will happen is anybody’s guess. We’ve never seen a speculative bubble that encompasses every nation and every person connected to the Internet. 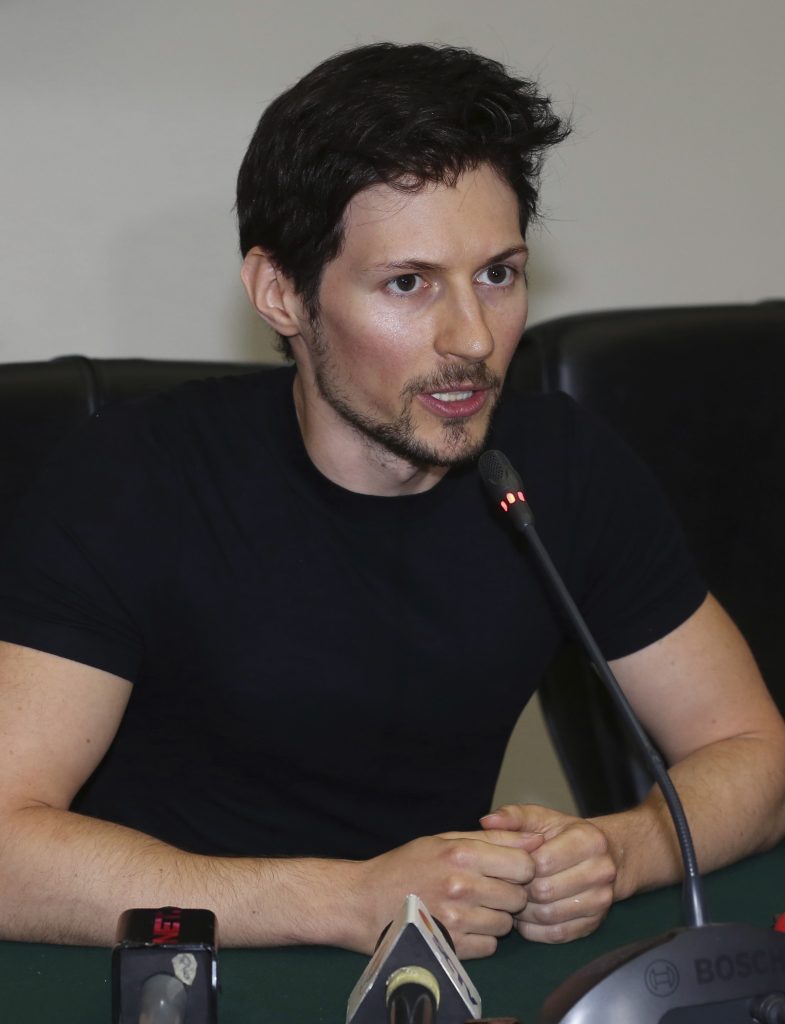 Telegram co-founder Pavel Durov. Will it be the Facebook of the decentralized Internet?  (AP Photo/Tatan Syuflana)

What happens next depends on whom you ask. Some analysts like to compare this to the Tulip Mania that swept across Europe in the early 18th century, in one of history’s first speculative bubbles. But others say that’s a bad example since all it did was wreck people financially. “The  dotcom bubble is a better analogy,” Neeraj Agrawal of Coin Center, a Washington, D.C.-based think tank, told me late last week. “At the end of the day, the Tulip bubble didn’t actually create anything.”

He pointed out the distinction, which is worth understanding. While it’s true that the dotcom run-up also created financial wreckage, most notably among naive “Main Street America” day traders, the speculative bubble formed atop the burgeoning Internet. After the hype cycle subsided, entrepreneurs who actually understood what they were doing created enormous value in new Internet companies, which made them and their investors wealthy. And that will happen here, too, Agrawal said: “There will be a Google and a Facebook and an Amazon that comes out of this thing.”

The trick now is to pay attention, learn as much as you can about what’s going on, and never invest more than you can comfortably lose. If the musical chairs game of buying and selling tokens appeals to you, a great foundation is the book Cryptoassets by Chris Burniske and‎ Jack Tatar. Likewise, listen to Laura Shin’s “Unchained” podcast on Forbes. There are literally hundreds of other great sources of original information, especially on Medium, but start with those two.

In terms of cryptocurrencies, generally, I can say almost with certainty that they will come to a bad ending. Now, when it happens or how, or anything else, I don’t know. Warren Buffett during an interview last week on CNBC

If you’re interested in getting involved in ICOs, where new tokens are offered during “presales” to fund new enterprises, that’s a far more complex matter.

While last year saw many crazy stories of companies being launched with ICOs that generated millions in minutes, there have been plenty of stories of fraud. Even more common, though, is that many of the business ideas, while well intentioned, never prove out. Agrawal figures that roughly 1 percent of the token offerings that come to market will result in real, successful businesses being created.

How do you spot the 1 percent that’s both legitimate and technically sound? Said Agrawal: “My answer is pretty unsatisfying: you have to spend many, many hours to learn how these networks work, and eventually get to a point where you can make that determination.” In other words, he added, “I don’t put money into things I don’t understand.”

As for the Telegram’s putative ICO, on the surface it definitely looks tantalizing. The company has 100 million users, many of whom are attracted to its security features—supposedly, your messages can’t be eavesdropped upon. It’s popular in countries with repressive regimes and in developing nations, where remittance (sending money abroad) is an important part of the economy.

Most interesting of all is Telegram’s charismatic and Putin-loathing founder, Pavel Durov, who left Russia with $260 million after locking horns with the government. Durov built a $3 billion Facebook-like social network there that was so successful that in 2012 he and some of his staff threw paper airplanes made of folded rubles from the office window into the street—nearly $5,000 worth. But after a scrape with the government, which demanded he take down opposition politicians’ pages from his social network, he said he was pressured into selling his network to a company with ties to the Kremlin, and he fled.

Telegram was built in 2013 in reaction to all that. If the leaked white paper is to be believed, it intends to launch a proprietary blockchain-based, decentralized network. It differs from both Bitcoin’s blockchain technology, and Ethereum’s system, the latter of which has become something of the standard upon which most tokens are built.

If it works as advertised, it could be a game changer. But will it? Read the White Paper. Then find trusted sources who actually understand this world.

(Disclosure: In early November, in the name of science, I bought less than $1,000 each of bitcoin and ether, and have subsequently put a few hundred bucks into litecoin and bitcoin cash. While I’ve doubled my money, I fully expect to lose most of it in the coming months.)

Here’s all the hype and stupid of crypto wrapped up in one funny video…I’ve always enjoyed a good book by the pseudonymous Stanley Bing, and I’m enjoying his amusing new speculative fiction, Immortal Life…Forget the 4K and even 8K TVs, the biggest thing that happened at CES last week was the power outage…After breaking everything in the world, Mark Zuckerberg is planning an overhaul of Facebook to fix it: Great Atlantic piece here.