The AI Will See You Now

Something odd is happening. More and more, I’m noticing people talking to, rather than on, their phones.

Further: Gmail, appears to be making better suggestions about whom to include and exclude on messages—and even what to reply. My phone pings me, just as I’m about to commute, with decent route advice. I’ve been using a virtual assistant—amy@x.ai, who is charmingly and ruthlessly efficient—to schedule meetings. I find myself increasingly asking Alexa for weather, news and Wikipedia lookups, not to mention jokes and Jeopardy games. (Best of all, my beloved Flipboard is getting weirdly prescient in its story suggestions.)

Clearly, we’re reaching a tipping point. The daily churn of stories about AI applications flows heavy and without surcease.

AI is constantly touted as the next big thing. But how many of us are aware that AI is already here?—VentureBeat

During the last week alone, while Silicon Valley and the rest of the world were gawping with schadenfreude at the man-made Uber trainwreck, a raft of stories documented how AIs have learned to:

As a benchmark, during that same week, I learned how to play “Aaron and Maria” on the guitar, albeit, very clumsily.

We’re still in early innings, of course. Last week, a Chinese AI powered by 11 servers, which engineers had worked on for three years, lagged behind many high schoolers in China who recently took the college entrance exam. It did OK, though, scoring a 105—just above the passing grade of 90.

Perhaps “lagged behind” was a poor choice of words. The AI was wicked fast: “It took only 22 minutes for the first test, and 10 minutes for the second—far ahead of the two-hour allotted time,” Mashable reported.

Meanwhile, artificial intelligence is eating the world. A friend of mine giddily told me about going to a $149-a-month doctor service in San Francisco called Forward the other day, which is partly powered by AI. (Good TechCrunch writeup here.) “The company uses AI to capture and organize member information from its body scanner, sensors, and exam room display screens in real time,” a spokesman told me. 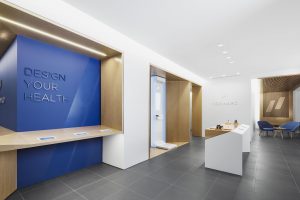 Forward’s $149 a month doctor service is powered by artificial intelligence. Photo via Forward.

Yes, I know the dystopians among us worry that we’re hurtling toward a Terminator-like singularity. And even more immediately, what about all the human workers AI will displace?

Since I’m a tech-utopian, I think that even as dumb as we are, we’ll be able to build controls into autonomous agents, avoiding a human extinction event. As for job displacement, a number of stories last week claimed that AI will actually create more jobs than it will destroy and add $1 trillion to the economy. Sounds great—unless you stop to consider the possibility that AIs wrote those stories. And maybe, even, this one…

Automattic, parent company of WordPress, is shuttering its San Francisco office because most of its 550 employees prefer to WFH…Everyone hates volume sliders—a fact celebrated by Reddit, whose users competed to make the worst one possible…Binky is an “anti-social media simulator“…

And finally: The big end-of-week news, that Amazon is buying Whole Foods, will only hasten Jeff Bezos’s ascension to Richest Person in the World. The New York Times did a piece speculating on the philanthropic good Bezos might do some day. I spent a few weeks with Bezos in 1999, when I profiled him as TIME’s Person of the Year. He said then that he intended to concentrate on philanthropy at the end of his career—and would focus on solving Amazon-sized problems whose solutions wouldn’t be attained during his lifetime.

Say you want to solve world hunger. If you think in terms of a five-year time frame, you get really depressed; it’s an intractable problem. But if you say, well, let’s see how we could solve this in 100 years—it’s a problem because you’ll be dead by then, but the solution becomes more tractable.—Jeff Bezos, Amazon founder.