A show of hands, please: How many of you were thrilled to hear about the upcoming changes to Facebook’s News Feed?

Chances are that unless you’re a publisher or an advertiser—most of whom have greeted Mark Zuckerberg’s January 11 post as if it were a bad report from the oncologist—you probably don’t care. Maybe you’re even taking Zuck at his word and believe that tweaking the News Feed algorithm to demote news, videos, podcasts, and maybe even ads, in favor of good old-fashioned “social interaction” will improve people’s sense of “well-being and happiness.”

Yesterday, the social network’s founder went further, saying that it was up to the public to decide which news organizations they trust. Facebook will be polling users and ranking media in what sounds like its own reverse version of the Fake News Awards. That ought to be ugly to watch.

But before I climb atop my high horse to disabuse you of that folderol, I have an obvious conflict of interest: I work at Flipboard, a David to Facebook’s Goliath. I came to this place after a career in journalism because I thought it would help beleaguered publishers, not suck the last marrow from their bones. Our company mission is that great content—good journalism—moves the world forward. And we use our growing platform to help distribute and amplify our partners’ best work.

For a while, I thought Facebook cared about that, too. Though Zuck initially dismissed as “pretty crazy” the post-election reports that his platform had been subverted by fake news, he later did a mea culpa and promised to hire a bunch of people to search for and destroy bad information. I figured that the fake news episode had been the outsized growing pains of a young giant. Two-thirds of the populace use social media to get their news, and more than 2 billion people around the globe are Facebookers, so it’s not surprising that wholly new forms of propaganda—and worse—would try to exploit the young platform.

The research shows that when we use social media to connect with people we care about, it can be good for our well-being. We can feel more connected and less lonely, and that correlates with long-term measures of happiness and health. On the other hand, passively reading articles or watching videos—even if they’re entertaining or informative—may not be as good. Facebook CEO Mark Zuckerberg, in a January 11 post

But this recent re-weighting of content, which is supposedly intended to strengthen the feel-good bonds between people and allow us to have our daily Facebook Kumbaya moment? It’s craven and venal and comes at the expense of the publishers who helped Facebook become the juggernaut it is.

Let’s first consider the damage it will do to sites that have come to depend on Facebook for traffic. “This asshole wants to take The Stranger out of your News Feed,” read a headline in that publication last week. While Facebook tends to account for a third of traffic to most publishers, it’s responsible for 50% of The Strangers’: “Those clicks literally keep the lights on. And, like every other publisher with a Facebook page and a website, our Facebook traffic is about to take a major hit.”

The fury of The Stranger aside, it did a good job of summarizing many publishers’ plight. Though Adam Mosseri, the head of Facebook’s News Feed, said that news would still be surfaced in the Feed if people were commenting and sharing it, The Stranger noted that “diminishing the importance of news in your Facebook feed is only going to penalize those who publish actual non-glossy but important news, which—let’s be honest with ourselves—just isn’t as fun as stories about Morgan Freeman running for president because ‘Killary’ belongs in jail. Which do you think is going to get shared more by the friends and family who will now be inadvertently curating your news feed? I’ll spoil it for you: It’s not the story about school budgets or police reform.”

Indeed, others were quick to point to Facebook’s own troubling beta test in six countries earlier this year, which presaged what will be happening here. It turns out, unsurprisingly, that the dumbest news is the most shared news—which only intensifies the fake news problem. Said The Next Web: “This shift of Facebook’s News Feed policy will also strengthen existing filter bubbles, limiting our capacity to pierce them.”

So much for the craven. 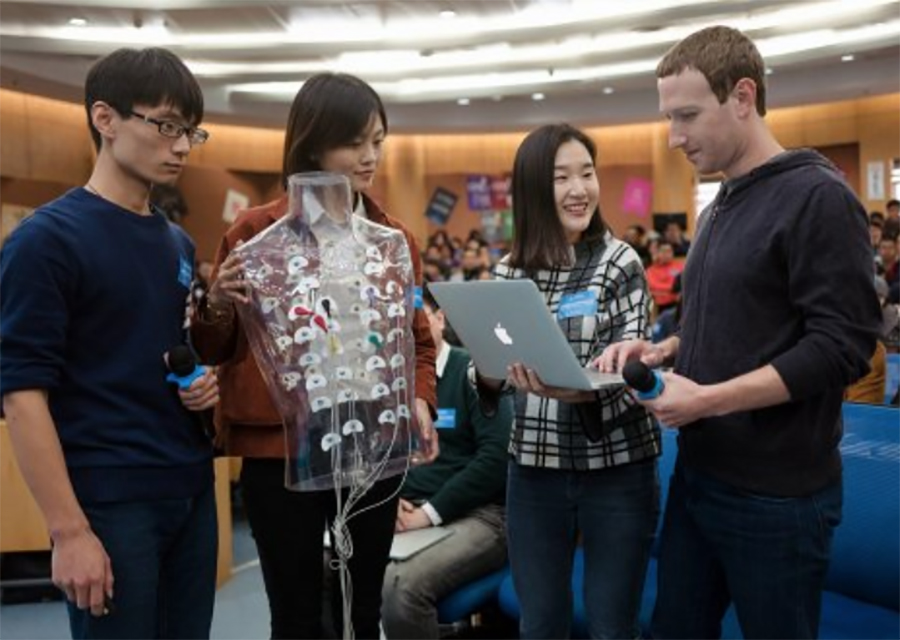 You’ve got a friend request: Facebook’s CEO wants to get into China. Photo via Facebook

Exhibit A is this Wired piece, which notes that for years, Zuckerberg has been trying to get Facebook unblocked in China. The government’s animosity to Western media there is well known, with virtually every publisher of note blocked by the Great Fire Wall. By minimizing real news content on Facebook, Zuckerberg can make a good faith showing that he’s ready and willing to play according to local rules. And why not? China’s 1.3 billion people represent Facebook’s last frontier.

(FWIW, while I buy Wired’s belief that that’s Zuckerberg’s goal, I doubt it’ll work. China has been nothing but a mirage to foreign businesses since the days of John S. Service. Besides, China’s homegrown Facebook is Tencent. The Government has been actively pushing for a financial stake in it—and a “corporate” role.)

Let us now examine Exhibit B. Quartz did the forensics and pointed out that social interactions will allow the company to up its advertising rates.

“The value of an ad is less in the impressions than in the downstream activities that Facebook can enable, such as a click to a website, an e-commerce transition, or an app install. According to Facebook CFO David Wehner on the third quarter 2017 earnings call, price is a much more important driver of Facebook’s ad revenue growth than ad impressions, and price is driven by the effectiveness of the ad at driving interactions.

You bet: I moderated a panel for the Financial Communications Society last week in New York and there was a table of Facebook folks sitting in the front row. The pending News Feed realignment was an obvious source of anxiety for the marketers in the room, who could only guess at how it might change their business. One of the Facebook guys graciously agreed to address the matter, and said he doubted that, for the time being, anything would change much.

But, he conceded, an ad price increase was certainly “possible” in the future.

Duh. Facebook has destroyed the media business—for now. But if we’ve learned anything from the Internet, it’s this: In Techland, even the disrupters will one day be disrupted.

One last kick: Zuckerberg recently bought a $150 million “expedition yacht,” according to reports. Aside from the usual heliport and cinema, the 107-meter-long “Ulysses” has eight dining rooms…Apple Inc. is expected to release an iOS upgrade in March that, for the first time in the history of mobile phones, will let you examine the health and fitness of…your battery… Just say no to Aumi, an Internet connected nightlife, with IFTTT support, so you never have to miss a Retweet again, or even sleep…Here’s how to turn off Instagram’s new Activity Status “feature,” which lets all your friends know what you’re doing…POTUS Donald Trump called Apple CEO Tim Cook and says he’s a “great guy” for repatriating $350 billion. Get a room, you two…