There’s gold in them thar weeds!

Some years ago, a relative of mine decided to move to Northern California to become a legal marijuana grower. Easy money, he thought.

He had been, for much of his life, a long-haul trucker and the back-breaking work was taking a toll on his body. So he and a pal, who knew something about growing dope, rented a place in a little town near me (the home owner would only rent to pot farmers on the assumption they were good credit risks) and launched their hydroponic farm. They worked without surcease.

Since everything from providing artificial “sunlight” to irrigating, fertilizing, trimming and harvesting depended on the ministrations of the two dudes, they were always on the clock. The plan was to produce a crop every three months. But selling the product was a nightmare: Much of the state’s marijuana is grown in the northern part of the state and we’re glutted with it, so they had to drive eight hours south to Los Angeles, where they could sell at a higher price. By law, they could only transport less than two pounds at a time, per person, which they could then hawk door to door to dispensaries.

It was a horrible business and they quit after a year. Long-haul trucking, it turned out, was more lucrative—and easier.

But timing is everything in business and they probably should have gutted it out. A so-called “Green Rush” is now in full bloom in North America, with plenty of high-paying jobs. Marijuana is reaching a tipping point: As of this writing, 29 states have legalized some form of marijuana—and, by January 1, “recreational” pot will be available in seven states and the District of Columbia. (Late last week, California finally released its guidelines to smooth the way for the sale of recreational weed in January.) Cannabis is rapidly becoming the nation’s biggest cash crop, with revenue from legal pot expected to top $30 billion by 2022. In fact, revenue is expected to increase by 44% in 2018 alone. 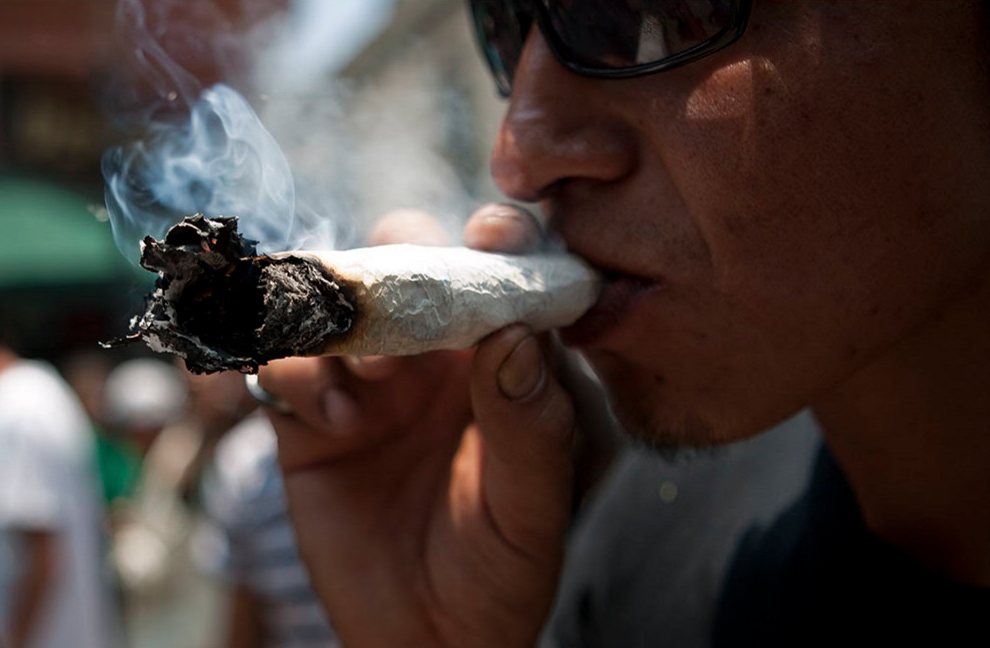 There’s no beer in this joint—but billions in revenue. Photo via Reuters

Our neighbors to the north are well ahead of us. Canada’s Prime Minister Justin Trudeau has vowed that his entire country will legalize recreational weed by next summer, becoming the first industrialized nation in the world to do so. (Though the details are still being worked out.) Already, two public companies there have reached $2 billion market caps, with others well on their way, and the bull market has attracted interest from U.S. companies, including IBM, which has been trying to sell the pot industry on its blockchain-based software to help manage distribution and market logistics.

Naturally, Wall Street money is flooding into U.S. startups as well—and Techland, too, is playing a critical role in everything from venture funding to cutting-edge vape pens (now with firmware updates!) to software platforms.

The GreenRush Group, for instance, wants to be “the Amazon of weed,” according to a Bloomberg story last week; the San Francisco-based startup just closed a $3.6 million Series A round to fund its technology platform, which connects consumers to pot delivery. The company even helps folks find gig jobs as delivery people—the Uber of weed delivery, anyone? (Wait, someone’s already doing that.) The new technology startups that have been birthed by the marijuana industry are as diverse as the buds, edibles, oils and concentrates offered by “budtenders” at finer dispensaries everywhere. You want customized data to allow for more precise micro-dosing from vaporizers? Yeah, there’s a company working on that, too.

Even Apple is interested in the burgeoning business. It’s applied for a patent for a new kind of vaporizer. 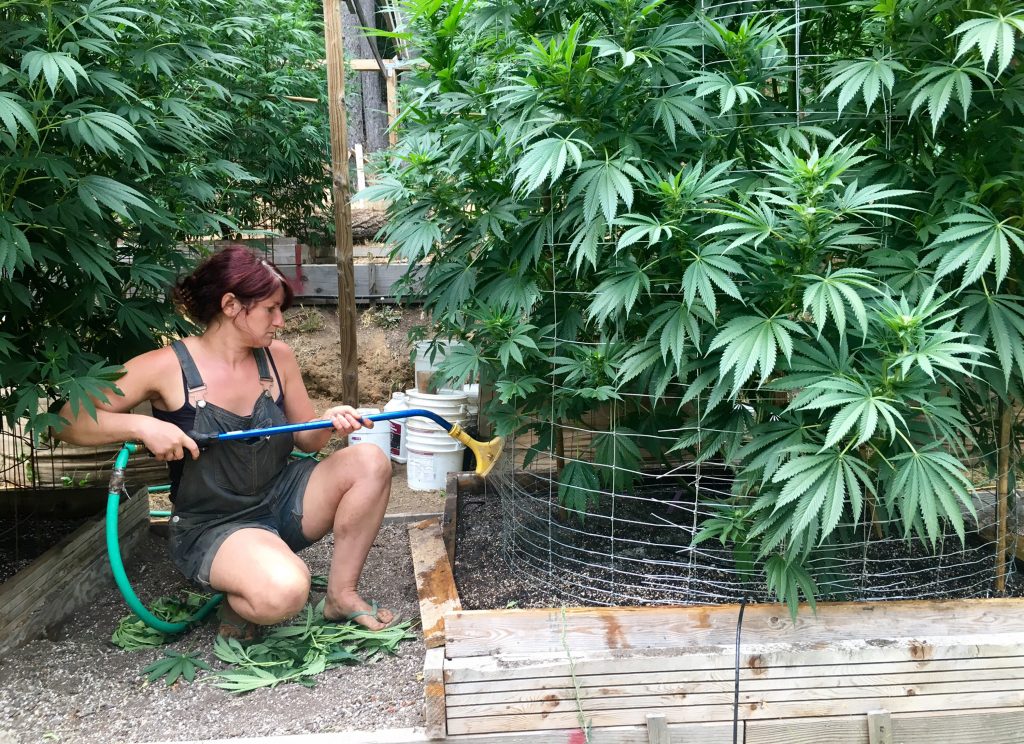 An unnamed worker waters cannabis plants on a farm in Humboldt County, California, via REUTERS/Rory Carroll

The industry is developing so fast that mergers and acquisitions are afoot. Last week, in Denver, Colo., where recreational marijuana is already legal, Baker, the so-called “Salesforce of the cannabis industry,” disclosed that it had bought one of its biggest competitors, GrassWorks, for an undisclosed amount. The acquisition added 150 client dispensaries to Baker’s 700 client shops, firming up its position in the Pacific Northwest, according to Business Insider. Baker is a CRM for the marijuana business that “empowers cannabis brands by connecting them with their customers, helping them drive brand loyalty and more revenue,” the company says, on its website.

“Screw it, just do it,” the great entrepreneur, Richard Branson, perhaps needlessly, advised marijuana entrepreneurs at a well-attended Bay Area conference last year. “It’s an industry with enormous potential, and it can do a lot of good.”

This is one of the fastest-growing categories globally. Why? Because people want it. When consumers want something, you ignore it at your peril.—Chris Burggraeve, Budweiser’s ex-marketing chief, now a big weed investor, via Bloomberg

Whether it does a lot of good—for the economy or society—remains to be seen. The news reported the first case of a possible marijuana overdose last week after a toddler appeared to have been exposed to his parents stash, though the story is far from conclusive. The Feds still consider marijuana an illegal Schedule 1 substance, and the current Attorney General, Jeff Sessions, isn’t exactly a fan of Cheech and Chong and has vowed to stamp out pot. Regardless, marijuana is just a weed and easy to grow, which has been causing the price to plummet. Maybe most consumers will be content to grow their own, which they can do far more easily than, say, make booze.

In the meantime, the big losers in all this appear to be the folks who’ve been farming weed for decades, says Vice, in a gloriously photographed report last week. These so-called “trimmigrants” used to rake in the big bucks when pot growing was mostly illegal. But now? With big agriculture and Silicon Valley eying the market, we can expect automation to displace that work force.  You can already buy a Munch Machine’s “Mother Bucker,” which can harvest 150 pounds of pot in an hour. Can a weed-cultivating robot be far behind? The answer, as always, is no. 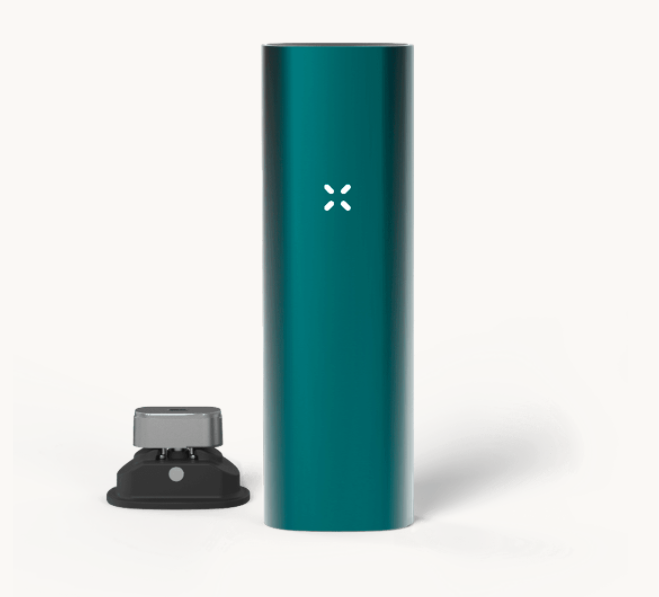 Since we will all be displaced by robots sooner or later, the more we understand about Universal Basic Income, the better. This WIRED story on a UBI experiment among the Cherokee in South Carolina is especially fascinating…While you’re at it, WIRED has been on a roll lately. You should also read this one on the race to build a mind-computer interface…At some point before Christmas, Apple’s smart speaker, the HomePod, is due to arrive. Here’s what we know so far…Google’s Pixel Bud earbuds have been garnering mostly bad reviews, like this one in The Verge…I finally broke down and spent $100 on a refurbished Kindle Paperwhite, which I’m loving since reading books on my iPhone puts me to sleep. But maybe I should have waited for it to go on sale at in an Amazon pop-up store in Whole Foods…Axios says quiz apps on mobile phones are the latest craze…And Twitter is testing a feature allowing people to more easily create tweetstorms…

P.S. The Saturday Tech Reader will be taking off next weekend for a high-tech fam get together. Happy Thanksgiving, everyone.

P.P. S.: If you or someone you know wants to get my weekly reader via email on Saturdays, all you have to do is is get an account on Flipboard, and follow Technology. We’ll take care of the rest.