This nation appears to have finally reached a tipping point in our tolerance for guns. Everyone is searching for a fix—with one notable and utterly deplorable exception: Silicon Valley.

If the titans of technology hope to stay out of the fray, that’s not going to happen. Anti-gun activists boycotted Apple, Amazon, Google and Roku on Thursday for streaming NRA TV, which has been described as the Fox News of the gun world. None of those companies budged in response. Though Apple CEO Tim Cook had shared one of those feeble “hearts and prayers” tweets at the outset of the Florida massacre, for the most part Big Tech is laying low.

And yet, in most other social issues, Silicon Valley—Cook especially— is on the frontlines. So what gives?

As a First Amendment absolutist, I’m fine if those companies are willing to give the National Rifle Association a platform to stream its point of view. Gun haters may well find some of that stuff obnoxious, but it’s not hate speech, doesn’t incite violence (against law-abiding humans, that is), or do any of the things that would likely bar it from being disseminated on Flipboard, in fact.

The $12,995 Mi8: “The U.S. military has not yet adopted this firearm, and it is not available to any other military. But it is available to the American public.” via TrackingPoint

While Techland might be wrapping itself in the warm and fuzzy cloak of free speech today, its gun problems go much deeper. The fact is, the financiers and others who make great technology happen in this country have largely ignored the entrepreneurs who have come forward with intriguing technology solutions—dating back to the mid 1980s—that would reduce accidental gun deaths, suicides and, possibly, even mass shootings.

The same kinds of biometric keys—visual recognition, fingerprint—we use to unlock our phones could be used to ensure that only the rightful owner of a weapon can fire it. In a similar vein, why wouldn’t we use RFID (Find My Gun!) tracking to locate stolen firearms?

There are even a raft of patents that would help “geofence” guns and rifles, which, among other things, would automatically prevent those smart firearms from being used in certain places such as, for instance, schools.

While you can find some of these innovations in modest ways, for the most part this has been a cause that the best and the brightest in Silicon Valley have avoided. And the VCs who’d fund that kind of thing, which is known as “smart gun” tech, have been ignoring smart gun entrepreneurs.

Dan Primack started writing about the topic a few years ago in Fortune (and continued last week in Axios) and found that VCs muster a variety of reasons for their indifference. Some “cite regulatory risks that don’t seem to bother them when investing in Uber or Airbnb or a pharmaceutical company. Others cite fund agreements that restrict ‘sin’ investments like weapons and tobacco, but certainly a carve-out could be created either via existing fund amendments, or future carve-outs for smart-gun technologies.”

But the real answer is far more obvious: “People who want smart guns are the ones who don’t buy them,” Adam Winkler, a law professor at UCLA and the author of Gunfight: The Battle Over the Right to Bear Arms in America, told Mashable. In other words, there’s no market for smart guns.

But creating markets and finding opportunities where the common wisdom say none exists is what disruption is all about. It’s what Silicon Valley and the rest of the great tech ecosystem excels at. Personal computers, electric cars, the commercial Internet itself—all of these innovations were launched into markets that were indifferent at best.

So who will step up?

The one notable exception to VC apathy out here has been angel investor Ron Conway. “The gun companies have chosen to sit on their asses and not innovate,” he told Newsweek a few years ago. “Silicon Valley is coming to their rescue.”

I hope he’s right, but we haven’t seen much evidence or activism in these parts. Yet if anyone can get something going on the smart gun front, it’s Conway, who has always been a force in Silicon Valley. His early investments, or “champagne rounds,” are almost a requirement for any startup looking to get serious funding down the road. So it’s heartening that he’s walking point on this one.

“This is going to happen outside the gun industry,” he told 60 Minutes in 2015, in a smart gun story. Conway, who was an early investor in Facebook and Google, said he was looking for the “Mark Zuckerberg of guns” and had invested in 15 smart gun startups. Maybe he’s found one. And maybe, with the current national mood, tech VCs will see a monetary opportunity in doing the right thing and using smart technology to get a handle on this killer epidemic.

In the meantime, you can be sure that other kinds of gun entrepreneurs will find the funds they need to invent tech to make firearms deadlier and more efficient. See for instance the “precision-tracking” invented by TrackingPoint, a Pflugerville, Texas-based “applied technology company.” (Good NPR story here.)

[TrackingPoint is] a revolutionary shooting system that puts jet fighter ‘lock and launch’ technology into a rifle. In addition, TrackingPoint designed and engineered advanced technology into the optics that calculates all factors required to enable and set an accurate real-time firing solution. TrackingPoint’s technological advancements in optics enables anyone to accurately hit targets at ranges from 100 yards up to one mile in some cases. Via TrackingPoint

Lest you think I’m a pearl-clutching gun hater, I was a riflery instructor when I was a college kid and used to enjoy bird hunting. I have no problem with the sport of hunting. But assault weapons and semiautomatics? Why would any civilian need that? And where is the sport in this? 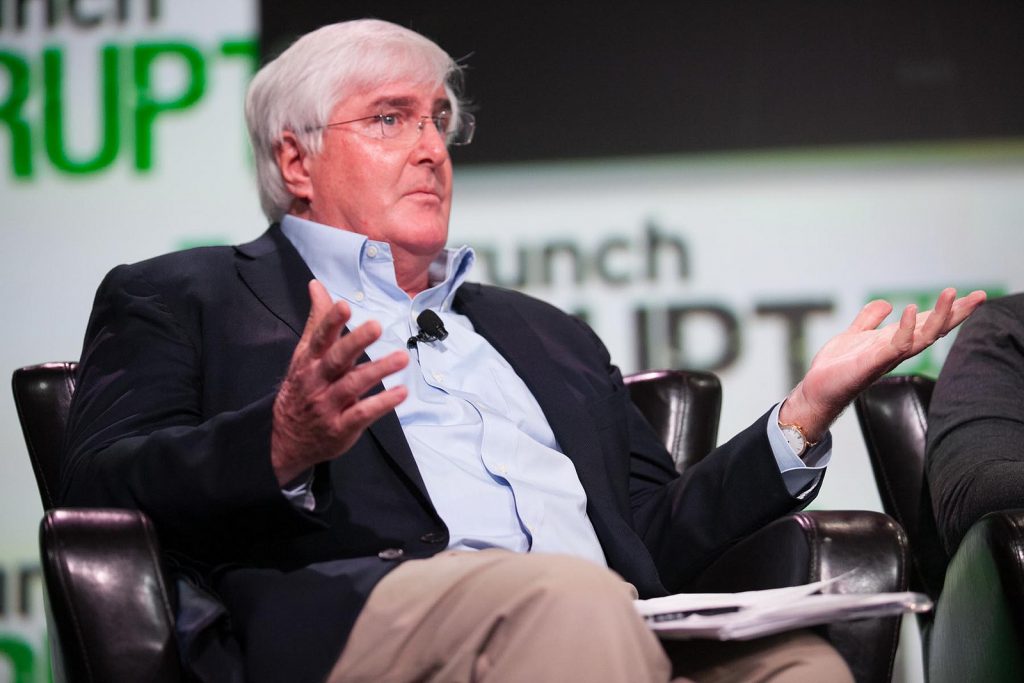 The Angel of Silicon Valley: Is Ron Conway the only VC willing to support smart guns? Photo via JD Lasica, Flickr

I learned long ago that some of the best tech writers in the world are software coders. Their love of precise, economical language rivals that of Mrs. Ruttenberg, my fifth grade English teacher. Which is a long, imprecise way of saying: Read this essay by Michael Lynch on “Why I quit Google…”…It was an excellent week for reading. This is the most interesting piece I’ve ever read on artificial intelligence, the impending Singularity and what it all means…Ars Technica  reports that a drunk guy accidentally took an Uber to West Virginia. It cost $1,600…Tesla’s scary-looking electric trucks are starting to show up on highways—scary because some day soon, they will be driverless…Here’s a cool, music-making tool via Google…And here is a smartphone-connected hula hoop.