The Future of Work

What happens when the robots get all the jobs?

The biggest problem facing Silicon Valley is not undervalued unicorns.

Nor is it sexual harassment, diversity, the high cost of housing, the congested highways or the battle for talent. All of these issues are certainly critical to people who live and work here. But they pale in comparison to the awful devastation Techland is wreaking on the rest of the world:

Silicon Valley has been steadily killing jobs, and the worst is yet to come.

Venture capitalists like to fund ideas that can scale, which means new companies will grow by adding more technology than workers. VCs don’t fund barbershops because if a barber wants to make three times more money, she needs to hire three more barbers. VCs fund companies such as Facebook and Google, which exponentially make more money by powering their businesses with technology rather than people.

This is no surprise, but boy, the bill has come due. Look at the near civil war that’s pitting American cities against the rest of the country and at the growing rift between the haves and have-nots. Automation is replacing everyone from truck drivers to brick layers. And that’s in the near term. White collar jobs will be the next to go.

Compounding the problem is that, for the first time, not enough new U.S. businesses are starting up to offset the death of failing businesses. And the new businesses that are launching are predominantly in big cities. “The rate of new business formation has plummeted, falling by half since the late 1970s—including a severe decline during the Great Recession. From small mom-and-pop storefronts to high-tech startups, new businesses are simply scarcer than ever,” reports a recent, harrowing study, “Dynamism in Retreat,” published by the Economic Innovation Group, a bipartisan think tank. “Americans are less likely to start a business, move to another region of the country, or switch jobs now than at any time in recent memory.”

The United States actually suffers from a problem of too little creation—not too much destruction—perhaps for the first time in its history. Our economic and job creation engine is rapidly slowing down.—Dynamism in Retreat 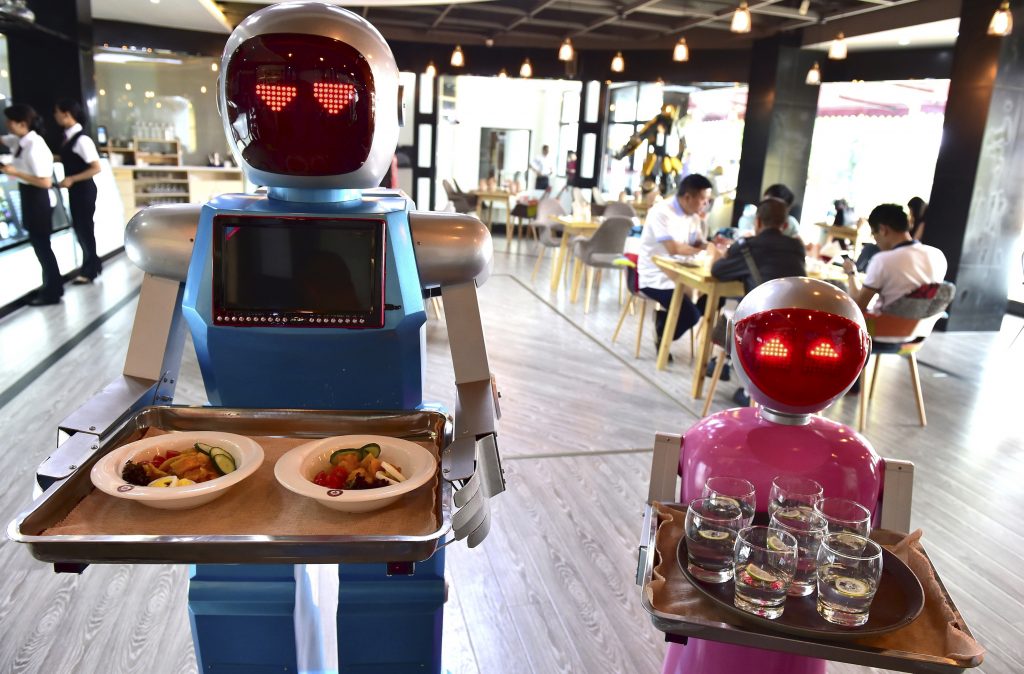 So what are we to do?

The future of work was on the agenda at Fortune’s annual Brainstorm Tech Conference which ended Wednesday in Aspen, Colorado, where it was generally agreed that most people want to work—but they care more about having a stable income than an especially large one. Researchers have known for more than a decade that after one’s essential needs are met, money doesn’t buy happiness: It turns out that the “cost of happiness” is around $75,000. (Here’s a state-by-state chart showing how much happiness costs locally.)

Lately, a number of Silicon Valley luminaries—Mark Zuckerberg and Elon Musk, among them—have embraced the idea of a Universal Basic Income (UBI), which would put all of us on the dole, regardless of need. (Vox dropped an excellent longread on the subject last week, here and another on Thursday, here.) The basic idea of basic income is to raise the economic floor that supports us all. People will still want to work—and to be entrepreneurial—and enjoy more material things if they do. But they won’t need to.

UBI experiments are already ongoing around the world. As part of a larger five-year study, Y Combinator in May 2016 launched a pilot project in Oakland, in which 100 families are given money—$1,000 to $2,000 a person. Writes Quartz: “The study will test payment methods and data collection, as well as whether the money meets people’s core needs, and how it affects people’s ‘happiness, well-being, financial health, as well as how people spend their time.'” Similar schemes are being rolled out elsewhere, most notably in Finland, in a tiny town near the Arctic Circle that was devastated by Nokia layoffs, where government money was intended to get people to accept low-paying jobs. (Though apparently, it’s not working as planned.)

Last week, Chris Hughes, a Facebook co-founder, was shopping around a book pitch that outlines his own modest proposal: Give people who make less than $75,000 a check for $500 a month. Hughes wants to encourage national brainstorming on the issue and has committed to using the proceeds of the book to fund a UBI pilot in a small American city. I’m assuming his broader plan, which The Washingtonian got hold of, but didn’t really explain, says how that will get us to Post-Robot Utopia. He has already outlined some of that thinking in a Medium post last year, when he asserted that “recurring, unconditional cash stipends are a shockingly effective way to encourage work, improve health and education outcomes, and create a ladder of economic opportunity.”

Some, including Helen Razer, also writing in Quartz, say that UBI is a pipe dream and “just a bedtime story Elon Musk tells himself to help the super-wealthy sleep.” She argues that Techland’s elite are cynically embracing universal income “to permit spending on their goods by what remains of the American middle class. No one on a stagnant wage can currently buy the things that Musk—and the rest of Silicon Valley—wants to sell them. These billionaires champion a scheme whose prime result will be their profit.”

Obviously, enormous questions remain about how Universal Basic Income would work, whether it’ll work, and how we’ll pay for it. On that last point, the best idea yet: companies that use automation in lieu of humans ought to pay hefty “robot taxes.” Bill Gates thought of that one, of course.

Not since the age of monarchs and royal courts has so much capital been controlled by so few and been so disconnected from work.—From Chris Hughes’s proposal for a book, “We Should All Be So Lucky,” as reported by The Washingtonian 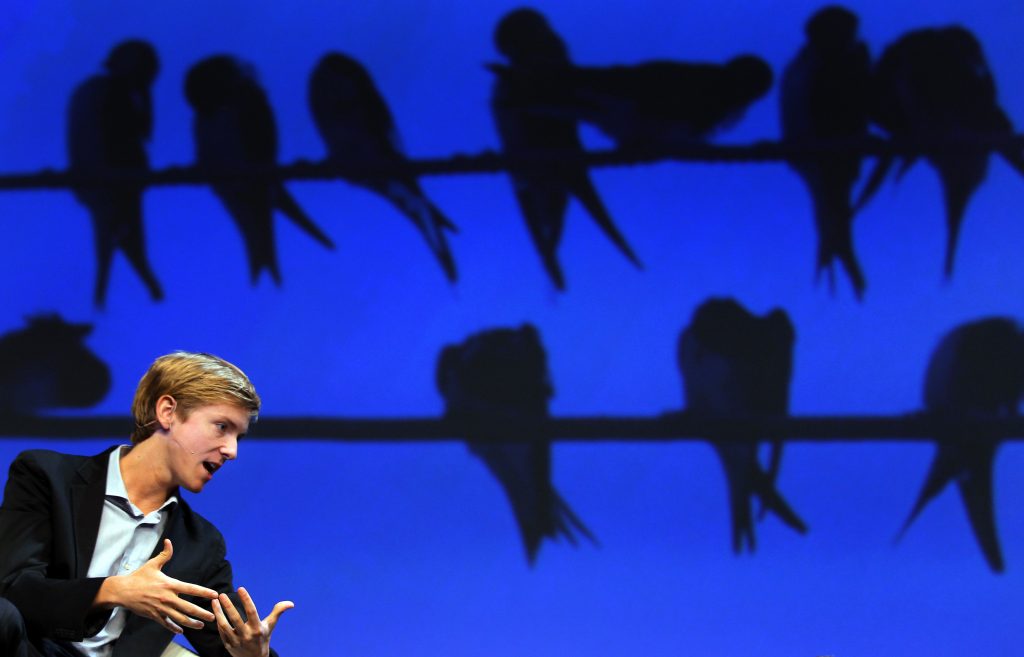 Buy: For you gadget hounds, I got the coolest toy after my brother-in-law—a fellow gadget guy, as well as a retired federal agent who trained police in Iraq—unexpectedly dropped by last week and camped out in my backyard. (Don’t ask.) He was packing a thumb-sized “Olight” flashlight, which he called “the Disrupter.” It can kick out an eye-searing 900 lumens of light, and when he turned it on, I thought a comet had crashed into the yard. The Olight recharges on a tiny USB ring, and you can step it down to a dim enough light to find the bathroom in the middle of the night without waking your spouse. I got it as a way to deal with the coyotes who sometimes come too close to my little dogs, Larry and Sticky, during our evening walks.

Read: As mentioned in a previous column, cryptocurrency has been my obsession lately—along with the rest of the world’s. If you’re trying to get a handle on the subject, far and away the best everything-you-wanted-to-know book out there is Digital Gold by Nathaniel Popper. Popper’s book chronologically tells the story of Bitcoin, and, along the way, he effortlessly explains and puts into context blockchain, Mt. Gox, Silk Road and all the other fascinating waypoints. The book was published in 2015, but is an essential foundation for anyone trying to understand why this stuff is so important.

Listen: This has virtually nothing to do with tech, but my favorite Audible book of the summer is The Force by Don Winslow. I listen to books way more than I read them these days and have come to appreciate the narrator almost as much as the book. Here we have a great and gritty New York police corruption yarn (think Prince of the City or Serpico), deftly written by one of my favorite writers, and wonderfully narrated by Dion Graham, whose Long Island accent isn’t exactly a Staten Island accent, but works nonetheless.

P.S.: If you or someone you know wants to get my weekly reader via email on Saturdays, all you have to do is get an account on Flipboard, and follow Technology. We’ll take care of the rest.