The Internet of Disaster

Tech, hypervigilance and the national PTSD

As of this writing, Irma, a hurricane of unimaginable and historic proportions, is bearing down on South Florida. But you already know that.

Surely you’ve heard by now—online, on TV, or maybe both while you were looking at a screen in an elevator, cab, or airplane—that Irma is the most powerful storm on record, and it’s one of three hurricanes in the Atlantic to reach land this week. It almost makes you forget Hurricane Harvey, unless of course you were one of its many victims.

And as horrible as the hurricanes of the past two weeks are, there was that 8.2-magnitude earthquake in Mexico the other day, which killed scores of people.  Never mind California’s weird weather—record drought, record rainfall and record heat, all during the past year—which, while shocking to those of us who leave here, now seems trivial.  What about those wind-whipped forest fires (truly apocalyptic photo gallery, via The Atlantic here) ripping across much of the West? Up in Washington state, the air was so smoky on Thursday that a state agency’s air-quality map crashed due to high traffic.

Government officials in Florida, Georgia and South Carolina pleaded for people to evacuate vulnerable areas, triggering a scramble for the essentials — gasoline, water, sandbags — that, even for hurricane-hardened Floridians, was laced with dread and punctuated with dire warnings from every direction.—The New York Times

At this point, I bet you think I’m going to go off on a climate change rant, but I’m not. (Though you should definitely read this excellent story in The Guardian and this Quartz explainer here.) 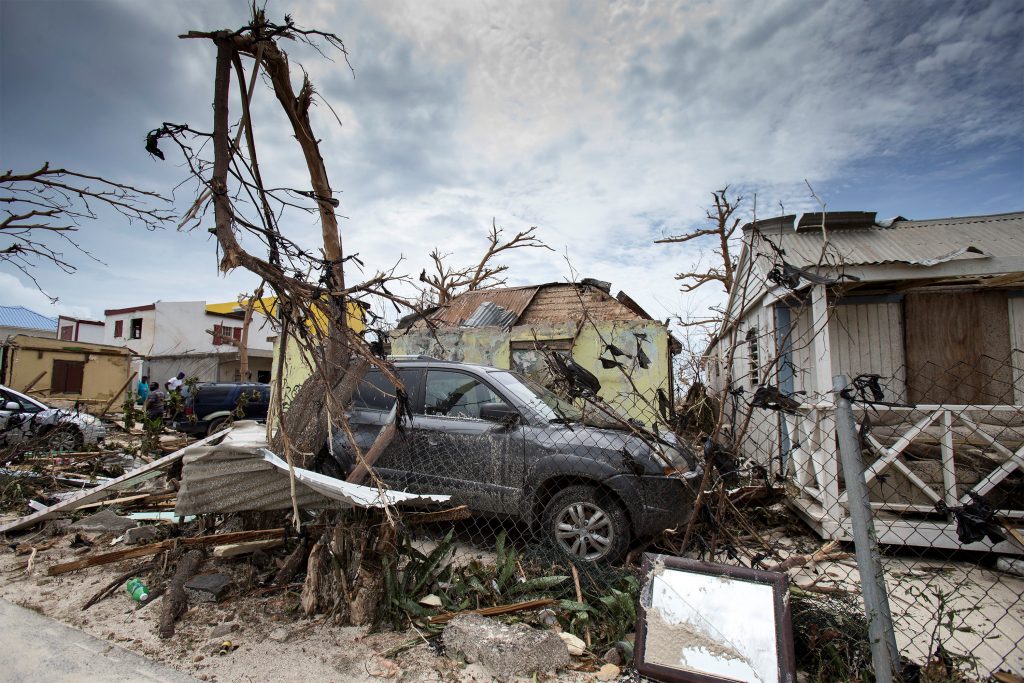 The aftermath of Hurricane Irma on Saint Martin, in the Caribbean, September 7, 2017. (Via Netherlands Ministry of Defence. Gerben van Es/REUTERS)

No, I’ve been thinking about why we seem to be living in a constant state of catastrophe. If it’s not the heavy weather, it’s hackers stealing our personal data, or North Korea about to lob a hydrogen bomb at us, or political unrest verging on civil war.

My thesis is simple: Since 9/11, the U.S. has been suffering from a lingering, post-traumatic stress syndrome. People who have lived through trauma often end up being on the lookout for more trauma. Psychologists call this hypervigilance. By being alert to danger, we believe we can avoid it.

Do you remember how, on that infamous day 16 years ago, the three cable news channels put up their news crawls because there was simply too much awful stuff to keep track of? But the thing is, that news ticker has never been switched off. Worse, since the last general election, it’s continually accompanied by a BREAKING NEWS banner.

There is no regular news anymore, it’s always BREAKING. Otherwise you wouldn’t pay attention, due to all the, uh, regular news, and the regular news crawl.

While it’s certainly true that we have had our share of unusually bad news lately, it’s also the case that we now live in a world where we’re super aware of everything that happens, 24/7, on our cell phones. Most Americans now get their news from social media, according to a recent Pew Research Center report.  But social media often extends our sense of panic, with a flood of beeps and vibrations and on-screen notifications.

There is, obviously, plenty of good that comes with the bad.  The same communication tools can be indispensable to people who are caught in one of those disasters.

The Zello Walkie Talkie, for instance, has been a real tech hero in these diluvian times. The free app turns your phone into a walkie-talkie and has rocketed to the top of the Most Popular app store charts during Hurricane Harvey. Why?

“What makes it useful is that it allows immediate voice communication to others in a shared channel, as opposed to having to place a phone call and hope someone on the other end picks up,” reports The Verge’s Nick Statt. (So proud: He was a Flipboard news curator a few years ago.) And GasBuddy has been helping folks find fuel as they flee Florida.

Many tweeters shamed price-gouging airlines into manually overriding their algorithms, and instead offering cheap fares to people seeking to flee the oncoming storm. (It remains to be seen if Twitter shaming works on Amazon.)

Google has stepped into the breach and is working with the State of Florida to mark road closures in Maps ahead of the storm.

And beyond the obviously useful, social media has been capturing endless amounts of fascinating stuff. Twitterers followed along on Wednesday, as an airline journalist documented, in real time, the hair-raising derring-do of a Delta pilot. The pilot threaded his plane into San Juan, Puerto Rico, disgorged his passengers, took on a new load of people fleeing the area, refueled and took off—all within 51 minutes—moments before the storm hit. (Full set of tweets here.)

And here is a thought-provoking thread from Scott Knowles, a prof at Drexel University. He specializes in the history of disasters, and explains why—global warming notwithstanding—disasters are getting worse in the U.S. Hint: Because we’re not investing in disaster research anymore.

Buzzfeed has this live stormtracker. And Vox is hosting this cool simulation showing how a Category 5 hurricane obliterates a house as winds exceed 125 MPH.  And (shameless plug) Flipboard’s users are, as always, collecting the best, most up-to-date stories, images and videos in magazines. See our News Desk magazine and some of our user-curated mags, and follow the Irma topic.

Conspiracy theorists around the world are claiming that a planet will collide with Earth this September—and that the… total solar eclipse [signaled] the apocalypse’s beginning. David Meade, author of  Planet X—The 2017 Arrival, asserts the planet Nibiru (also known as Planet X) will crash into our own on 23 September 2017.—The Telegraph

But my god, it doesn’t stop, does it?

HOOKWORMS IN THE U.S.!

That’s just some of the other awful stuff that happened, beyond killer hurricanes and hundred-year quakes, during the past week or so. If the world really is coming to an end, as some believe, it’ll be a real Instagram moment.

When I’m not scaring my pants off following the news, I like things that fly: This smartphone-controlled paper airplane gets interesting reviews on Amazon — BGR has a deal… And speaking of: Amazon is looking for a city to site its second HQ: If there is any justice in the world, it will pick Detroit, because that city has suffered long enough… Read this WIRED piece on how to protect yourself after the Equifax hack… Here’s a pen that can ID certain kinds of cancer within seconds, and here’s a Stanford University AI that can tell if you’re gay, just by looking at your picture — it’s 74% accurate for women and 81% for men… And as if that weren’t enough: The new iPhone (and maybe the newest watch) will be unveiled this week. Expect a wall-to-wall OLED screen, wireless recharging, face (rather than fingerprint) recognition, a $1,000 price tag and a built-in cigarette light. OK, I made up the last part, but some of the other rumors could be just as wrong, too.