Why working from home isn’t for everyone

In 1995, upon taking over Fortune Magazine, which was then badly in need of an overhaul, the great editor John Huey famously told his staff: “From now on, people aren’t going to get rewarded for perfect attendance.”

What Huey meant was that writers, reporters and editors now would be judged by the quality of their work—not by how early they got to their desks, how late they stayed, or even whether they got to their desks at all. He wasn’t talking about telecommuting, which wasn’t yet a thing. But he may as well have been.

I think about that quote whenever the telecommuting question pops up—as it did  some weeks ago. That’s when IBM, which for decades had encouraged telecommuting, decided to force 2,600 remote workers in its marketing department to physically “co-locate” to one of a half dozen offices around the U.S.

If you’re going to read one story about the interesting thinking that went into the IBM decision, treat yourself to this Quartz piece, which came out ahead of the news. The bottom line, according to the story: If your job involves fast-iterating, data-based decision making and brainstorming, there’s no substitute for working together in-person.

And yet, plenty of studies have concluded that telecommuting is good for the employee, great for the company, and a boon for the environment. According to the recent 2017 State of Telecommuting in the U.S. Employee Workforce Report: 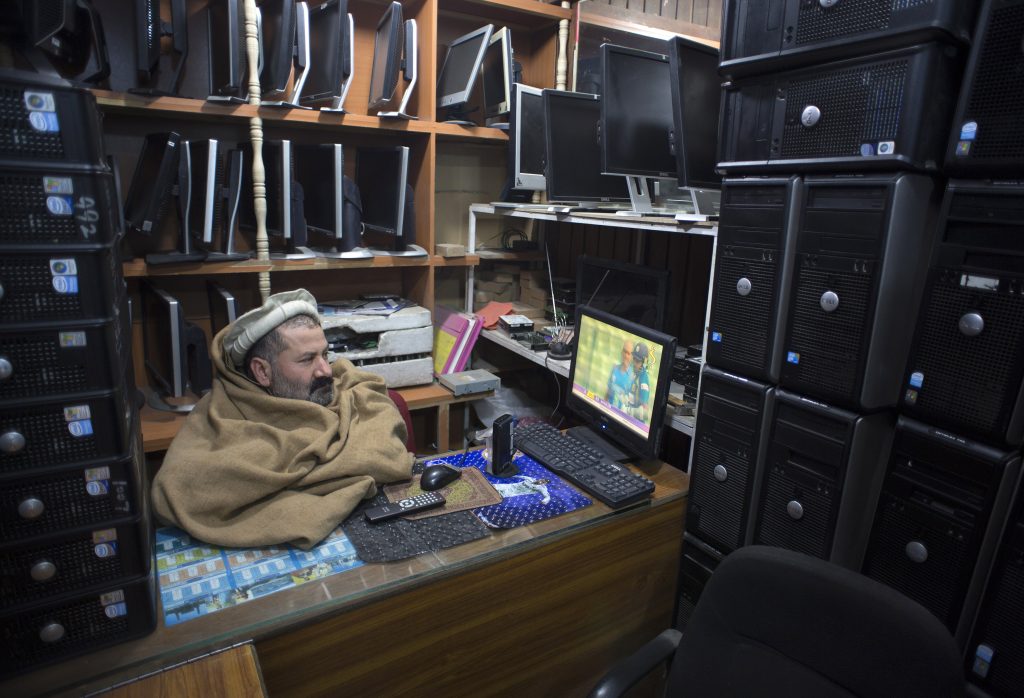 A trader watches TV in his “home office” in Kabul, March 3, 2014. (REUTERS/Morteza Nikoubazl)

The Harvard Business Review says that remote workers tend to be more productive than in-office folks and that high performers like it better. And the Los Angeles Times makes a great case that telecommuting, rather than mass transportation, will be the real boon to cleaner air—and that trend will only improve as information workers move from crowded, expensive cities to more rural areas.

Ah, but of course there’s another side to the issue. Peter Cappelli, a professor of management theory at Wharton, says to work from home or not to work from home is a knotty question that can only be answered on a case-by-case basis. He notes that telecommuting started in Silicon Valley, where technical solutions were brought to bear on terrible traffic problems. But over the years, many sophisticated players in the Valley—from Google to Yahoo—have pushed back and created irresistible work environments (gourmet food, climbing walls, health clubs, nap pods, masseuses) that encouraged people to all but live in their cubes. As for telecommuting these days, Cappelli says: “Is it a good thing or a bad thing? The answer is, it depends.”

That jibes with what my friend David, who runs a team of engineers at a Silicon Valley startup, has long observed. He says many of his people thrive at home, while others—even especially brilliant programmers—sometimes lack the communication skills to seek help when they’re stuck, and can get a little lost at home.

Steve Jobs, who was not known for being a touchy-feely manager, nonetheless managed to get great things out of his people. He believed that the best ideas came from chance, face-to-face encounters. He made sure that the bathrooms at Pixar were placed in such a way as to maximize serendipitous encounters between workers from disparate departments. I once visited Dreamworks, in Los Angeles, and was impressed by the fact that it had a constantly on, HD-video feed connecting a conference room to another one in its Redwood City office in northern California. While that isn’t an example of telecommuting, the video communication was so clear, I felt like I was in the same conference room as people 500 miles away. Perhaps they need a video feed connecting the bathrooms.

As good as Slack, Zoom and other telecommuting tools have gotten, most of us still suffer from the jankiness caused by low bandwidth and cheap, off-the-shelf technology.

I will admit to being an apologist for working from home. Indeed, Quittner’s First Law of Telecommuting states that one’s belief in the virtues of working from home is directly proportional to the number of miles one works from the office. In my case, that’s 45 miles—a 90-minute commute that takes me across the Golden Gate Bridge and south across the traffic hellscape of San Francisco and its sluggish, car-hating slowdestrians, down to Palo Alto, where the traffic is even worse.

And yet, even I will concede that sometimes, the best and fastest way to make progress with a group of people is by going into the office. Something happens when people are eyeball to eyeball, riffing off each other’s ideas that seems to only occur in meatspace. But I’m ever hopeful that better telecommuting technology will fix that.

Robot-made pizza? Why not…Toyota is testing a robot that brings food and drink to a disabled war veteran, among other things…Ohio becomes the fifth state to pass legislation permitting robot-delivery services. Neither California nor other big-population states have approved similar legislation…yet…If you’ve ever wanted another opposable thumb so you’ll have six fingers on your hand, there’s now a robotic prosthesis for that…Robots are getting ready to have sex with humans…(Hello? Back yet?) And finally, as if Google hasn’t done enough to kill media: it’s now funding a news site written by robots. Do no evil?