A Tesla in space today, Elon Musk on Mars tomorrow

For a half hour last week, Silicon Valley shut down with the rest of Techland to watch Elon Musk launch his rocket-borne Tesla Roadster at Mars.

I got to enjoy the spectacle at Flipboard, in Palo Alto, where someone had rigged up the SpaceX video stream to a wall-sized display. It hardly mattered that the audio was slightly out of sync—this was a space launch whose production values practically bled the excitement from my black-and-white memories of watching the first moon walk. And when those two booster rockets fell back to earth, their engines firing to slow their descent, the stabilizers fins opening like dorsal fins…then nailing that asynchronous, balletic landing? We leapt to our feet for a standing O, the Flipboard engineers and I, with an OMG on our lips.

Never mind that, just then at the White House, a Department of Justice official was nattering on about the evils of illegal immigration. Here was our hero, Musk, an immigrant from Africa, electrifying the world with the audacity of his vision—and making U.S. history yet again.

And yet, while so many of us were awestruck, some were not so easily wowed. Adweek and The Drum, among others, were more interested in the event being the greatest publicity stunt of all time. Interesting to note that it was the second-most-watched YouTube event—second, that is, to another publicity stunt, the so-called Red Bull Stratos Jump, in 2012. The SpaceX launch was perfectly timed, a day ahead of Tesla’s disastrous earnings call, in which Musk’s other famous company reported a $675 million loss for the quarter.

Another criticism came from Refinery29, which was more concerned with the lack of diversity among the rocket scientists at the launch site. Where were the women, it wondered: “Shots of the room where employees and onlookers gathered to whoop and holler as they watched the culmination of their hard work showed barely any women. Looking for one in the seemingly all-male crowd was like playing an intensely frustrating game of Where’s Waldo.”

It was more of a class thing for The Economist: “The mega-rich have ambitious plans to improve the world,” it fretted. “Should that be a cause for celebration or concern?”

While the funniest reaction came from Reddit users, who speculated that Musk had committed the perfect murder by disposing of the body in the Mars-bound Tesla, the most negative piece came from Nathan Robinson, editor of the left wing political journal Current Affairs. He wrote a thumb sucker for The Guardian, which described the launch as “utterly depressing” and an indefensible waste of resources.” While there’s nothing wrong with a mission to Mars in theory, Robinson argued, there are plenty of humanitarian crises on earth that ought to be addressed first.

There is, perhaps, no better way to appreciate the tragedy of 21st-century global inequality than by watching a billionaire spend $90m launching a $100,000 car into the far reaches of the solar system.—Nathan Robinson, writing in The Guardian

I suppose there’s something to prioritizing how we deal with the world’s worst problems, though if the amount of time it takes to solve a particular problem is factored into our priority matrix, “colonizing Mars” might well edge out dealing with the situation in Syria.

Regardless, the race among private companies to explore outer space has always had its critics. Neil deGrasse Tyson, an astrophysicist and Director of the Hayden Planetarium in New York City, says we’re kidding ourselves if we think SpaceX, or any private company, is going to colonize Mars. “The delusion is thinking that SpaceX is going to lead the space frontier,” he told The Verge in 2015. “That’s just not going to happen, and it’s not going to happen for three really good reasons: One, it is very expensive. Two, it is very dangerous to do it first. Three, there is essentially no return on that investment that you’ve put in for having done it first.”

The space race among private companies, famously run by billionaires including Jeff Bezos and Richard Branson, began around the turn of the century. It kicked into warp speed in 2011, after President Barack Obama shut down the space shuttle program. Musk’s initial plan, to build a greenhouse on Mars, caused him to start SpaceX in 2002 and his company has since done around $2 billion worth of private contract work, mainly putting satellites into space. While last week’s launch demonstrated that his tech could push a heavy payload into outer space and rely on reusable booster rockets—at about two-thirds the cost of a similar NASA rocket—SpaceX clearly has a long way to go before mounting its first expedition to another planet.

Beyond Musk’s avowed desire to die on Mars, what’s our hurry to get there?

Musk (and a great many other people) worry that some kind of man-made Doomsday event, or global warming, will make us head for Planet Earth’s exits sooner rather than later. Here’s an excellent Wired piece that gets into the nitty gritty of Musk’s thinking, but the tl;dr version is this: He reckons that Mars, with its underground reserves of frozen water, relatively benign gravity and atmospheric composition is the closest, habitable planet. But it’ll take tens of thousands of trips there, over the next 50 to 100 years, during which we can ferry equipment and people, to start colonizing the red planet. Currently, it takes around 300 days to travel, one way. So time’s a wasting…

Space travel is an esoteric thing, and since so much of our visceral reaction to the idea comes from TV and the movies, I think some people are inclined to reflexively dismiss it as a fantasy. Which is a pity. None of us knows whether Doomsday is upon us (the clock recently inched 30 seconds closer to the apocalypse) or whether the most pressing problems of this world are manageable into the foreseeable future.

But one thing we do know: the history of technology has shown us time and again that humankind benefits when the boldest and smartest among us push the edge of possibility. In the end, it’s what life is all about.

“I’ve said I want to die on Mars, just not on impact.”—Elon Musk, during a SXSW interview, reported in Vanity Fair 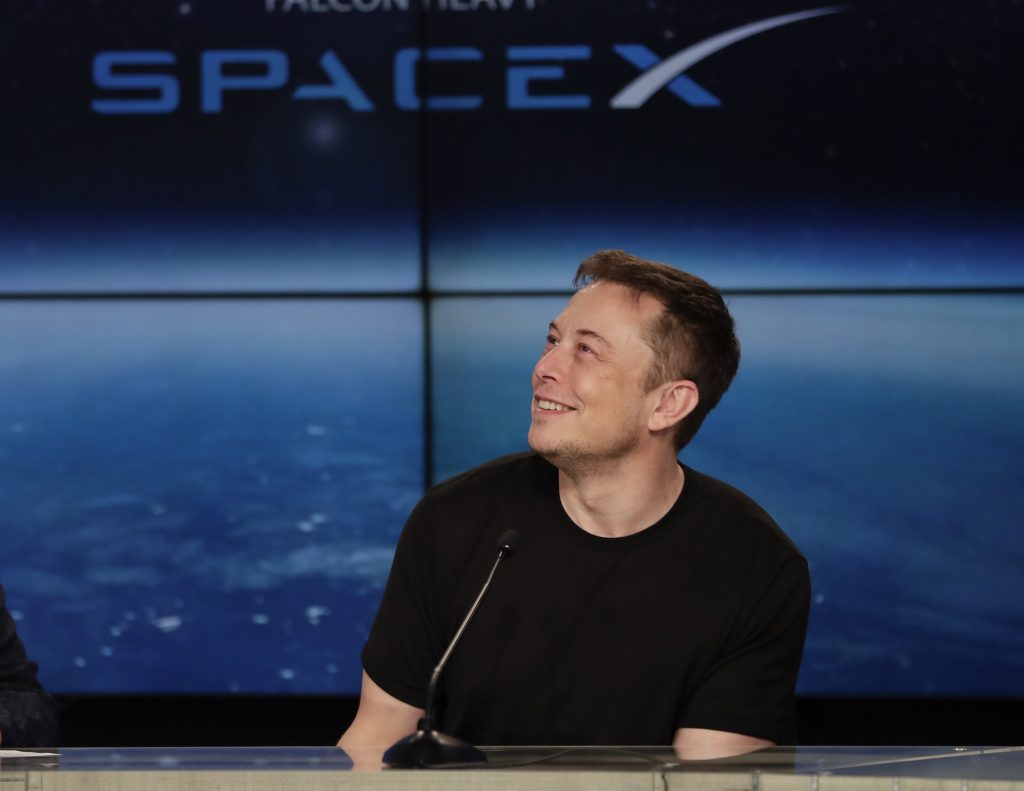 You’ve probably watched all the great video, but have you actually listened to the launch of the Falcon Heavy? This “binaural audio immersion” is worth checking out…RIP John Perry Barlow, whom Kevin Kelly calls the Mayor of the Internet. Barlow was one of the first people I interviewed—and always had the best quote in any piece—when I started covering this place in around 1991…Dislike Slack‘s new emoji? Here’s how to bring back the old ones…Amor Towles, who wrote the novel A Gentleman in Moscow is one of my favorite writers. He’s offering an as-yet unpublished collection of short stories via a novel print-on-demand experiment. You can sign up for it by @ing him on Twitter at @amortowles…Here is Sonos‘s snarky playlist, welcoming Apple‘s new HomePod to the smart speaker competition.