A Year in Motherland

To celebrate Mother’s Day, you’d be hard-pressed to find a project more poignant than photographer Winky Lewis and writer Susan Conley’s book, STOP HERE. THIS IS THE PLACE. As neighbors and close friends who’ve lived on the same street in Portland, Maine, for 11 years, the women embarked on a creative journey together a few years ago to capture a year in the life of their children: each week, Lewis sent Conley a photograph of their children playing, the street where they lived, and the nature that surrounded them. With no discussion, Conley would respond with a short story inspired by the photograph. Here they discuss their favorite pages from the book, what they learned about each other during the process, and what the project says about modern motherhood.

Which is your favorite photo/text pairing and why?
WL: That’s really tough. I love so many. For me, as the photographer, it is the writing that just slayed me week after week. Susan would send her story back to me each week and each time I’d be taken aback, completely surprised by where she’d taken each photo. I really do have many favorites, but off the top of my head, tonight, I might say page/week 27: 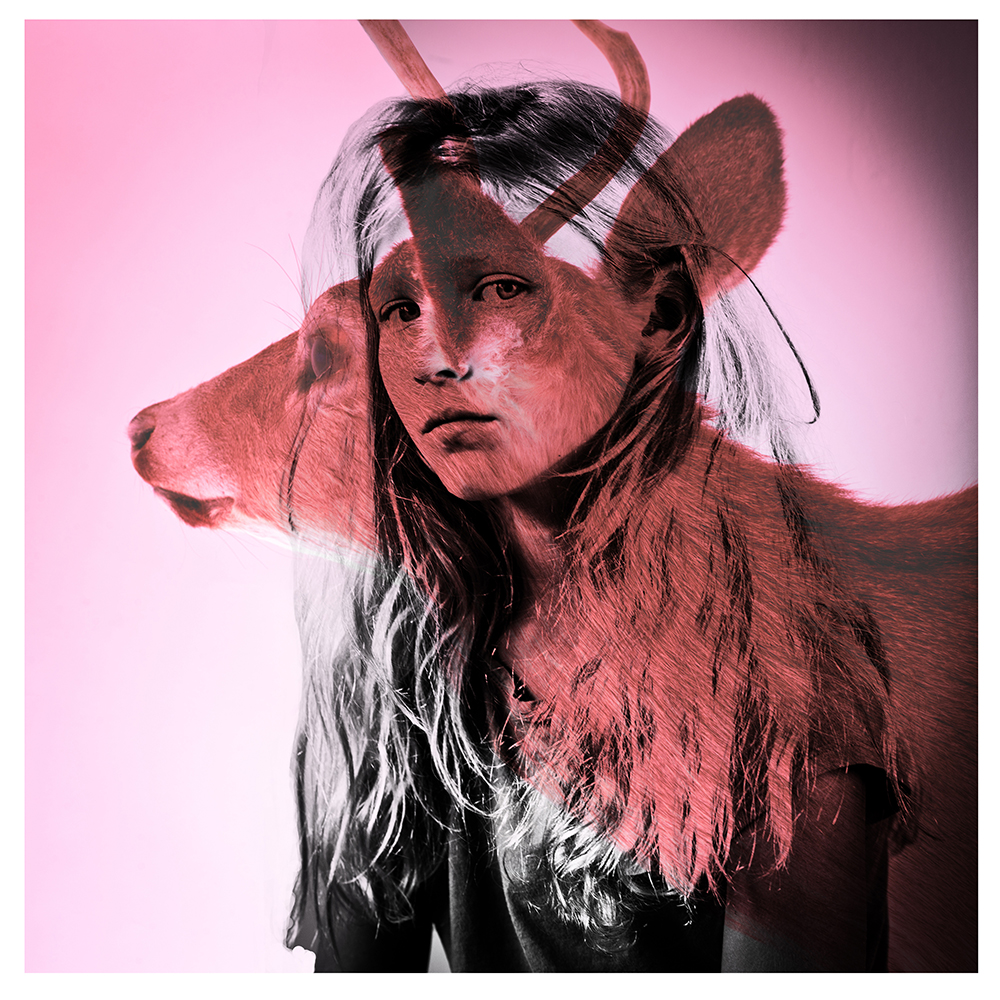 27.
Some nights I got to lie in her bed and watch my mother
choose a dress from her closet, then brush her long hair.
She hardly ever wore perfume except those night
when her friends came over. I knew her body
as if it was my own. And it made me feel so good
to know where I came from.

It is just a photo composite I did one week by layering a photo of my daughter on top of a photo of a deer head. But Susan’s story takes me right back to being about eight years old and looking at my own mother getting dressed up before a party. My mother got very sick when I was about that age, so being taken back to those wonderful memories, which I’ve mostly blocked out, was such a gift. Susan assumes about three or four voices in this book, and with this voice of the young girl she often took me back to my own childhood, which was a very nice place to visit.

SC: So my favorite is probably week 18 and the photo of the boy’s back with his arms bent backwards and his hands on his shoulder blades. 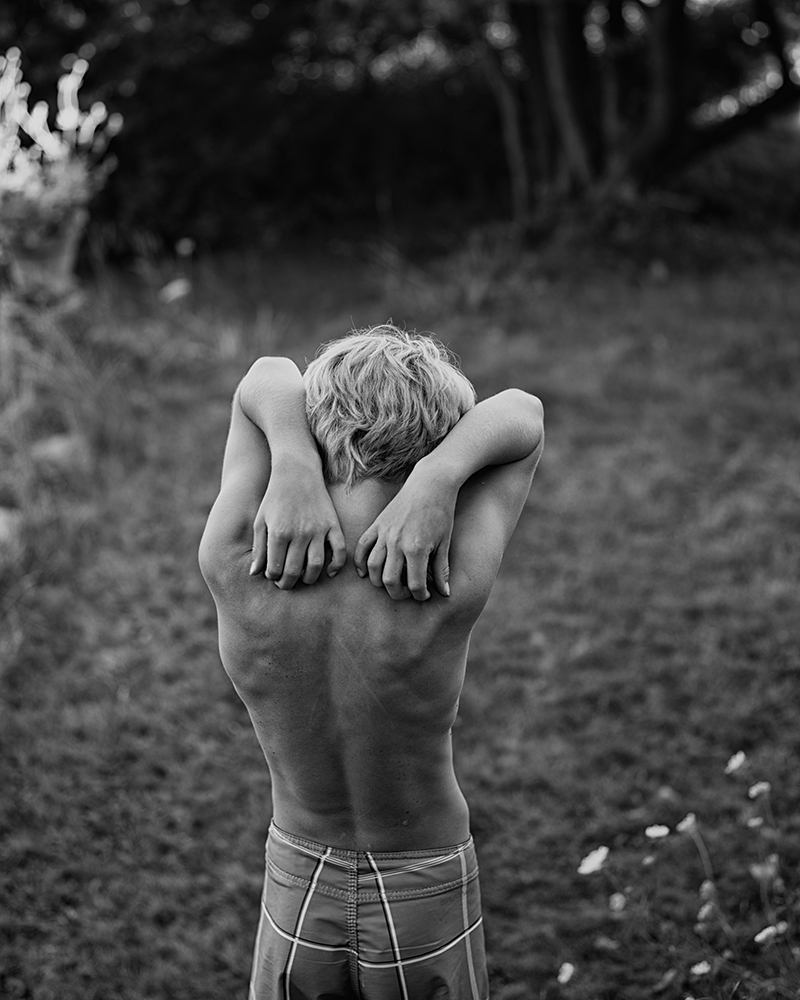 By the end of the summer my mother calls me something more animal than boy. And imagine if you could talk to wolves.
I mean really talk to them.
Would you give up being human?

And what if they taught you their wolf language?
Would you walk away from your mother and your father,
to live with them? Would you never come back? And once you chose, would you be gone to the people you love forever?

I think the shape of the actual body is so interesting and compelling here and unusual. What is that boy’s body doing? It looked more animal to me than human in a way. And this is an analogy that sometimes happens with pre-teen boys: they are wolves or run in wolf packs or are like puppies the way they are so physical. I have two boys, so I live in boyland. And this photo just really spoke to me about something my own younger son had asked me point blank one night: “Imagine if you could talk to wolves. I mean really talk to him. Would you give up being human?” These are the kinds of delicious and sobering and grounding questions that our kids ask us and that we have to answer quite seriously. And then the question becomes wonderfully existential.

Winky, what inspired you to shoot the way you did? The pix remind me of Sally Mann, Was she an inspiration?
I have always loved Sally Mann’s work. Always. I first discovered it in the Art Library in college when I stumbled upon an article about her in a magazine, many moons ago. I was so taken by her work that I wrote her a letter. I asked her to come speak to our photography class, and I knew I had a chance in succeeding with this request as the article mentioned she was a big fan of my teacher at the time, Emmet Gowin. About a week later I found a photo from her in the mail, written as a postcard. She said she’d be up for a visit as soon as she could. I have that photo pinned to my wall right next to my desk.

What other photographers influenced you, Winky? And did your commercial pictures affect how you shot this book?
Emmet Gowin is perhaps my biggest influence, as he is one of the most special human beings I’ve ever known. But there are endless photographers whose work I admire: Mary Ellen Mark, Minor White, Julie Blackmon, Loretta Lux, Fazal Sheik, Jock Sturges, Gregory Crewdson, and many, many others.

What camera did you use?
I used a Nikon D3 and a Hasselblad to shoot the images in the book.

Susan, who/what were some of your inspirations?
I started my writing life as a poet and did all my undergrad and grad work in poetry, with nonfiction and fiction detours along the way. I don’t really publish poetry anymore and have been writing novels these last five years. But poetry always grounds me and grounds my work and reminds me to get very granular and to look closely. Basho, Robert Hass, Louise Gluck, Campbell Mcgrath, Rita Dove, Carolyn Forche, Mary Oliver—I could go on an on. The poets inspire me and so do the creative nonfiction writers like Jo Ann Beard and Elizabeth McCracken who are able to write a taut, lyrical sentence in a longer coming of age story.

What have you both learned from this project?
WL: This book really pronounced how quickly a year passes, especially at this point in our lives with kids at these ages. I can open the book now and still be struck by the thought of REALLY trying to appreciate the tiny moments that fill our day.  It also really highlighted the power of collaboration and what two friends can produce by just teaming up. It was really fairly simple for both of us, I think. I wish we’d thought of it earlier!  We did continue with it for a second year and if we can find the time, we may try to turn that into a book, too.

How did it impact your friendship?
WL: Susan and I have raised our kids together on our tiny street here in Portland; we’ve really relied on each other to do that. I’ve been working as a photographer, and Susan’s been writing books, teaching, founding and helping to run a nonprofit writing center here, so we’ve both been busy and we’ve really leaned on each other. We knew each other pretty well going into this.

What I learned about Susan was that she could write in a different way.  I shouldn’t have been surprised, because at her core she is a poet. And the best part was that even though I was always surprised by where she took the photos, I always felt they remained in my world, whether that was the world of my own childhood or my world as a mother.

SC: It deepened a strong bond that was already there. We work really, really well together and it’s not every friendship that can do that. I think we are so lucky that poetry talks to photography really well. I feel like our two languages: Winky’s photographs and my language of probing prose speak together really organically.

What do your kids think about it?
WL: There are some funny stories about our kids’ responses, and Susan can speak about her son’s Aidan’s response, I hope. But my kids were happy to see the project they’d heard so much about come to life. The arrival of the real book was exciting and I know they were proud.  My kids have been big supporters of my work. They’ve been collaborators for a good chunk of their lives, though they’re beginning to outgrow that now, and now they are becoming sources of great business and artistic advice, which is pretty cool.

SC: They are proud of the book, though my younger wolf-speaking son did read it cover to cover one night at Winky’s counter. Then he came home and at bed time in the dark he told me that he “really hoped that the book wasn’t my final draft because there were some things I could do to make the writing much better and not so simple.” This was probably my favorite moment in the life of the book: his surety that I had the voice all wrong, when that was the voice—and in large part his voice—that I wanted to capture.

What does it say about (modern) motherhood?
WL: Susan and I are so blessed. We’ve both got supportive, wonderful husbands; we’re all healthy, we live in a wonderful place, we don’t want for anything, but still I find that we’re all too busy, just racing and racing. I don’t think it was like this when I was a child. I think my own childhood is reflected in the photos I take. I don’t take pictures of the racing or the stress. And each week when I’d get Susan’s story back in an email it would literally make my heart skip a beat and take me to a moment with my kids, or with my own mother as a child, and it always felt so good to STOP and FEEL and reflect. I don’t know if we’re all racing trying to do it all, if the world is too connected, if we’re trying to compete too much, but it sure doesn’t hurt to slow down a bit.

SC: It reminds me to just to listen and not to judge the imaginations of children. It reminds to respect the mind of a child. Not to be reductive about their thinking. So I guess for me the book has deepened the meaning of motherhood. 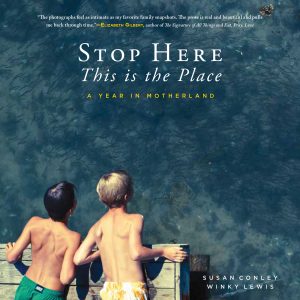 You can find more Mother’s Day reads on Flipboard via special collections from InStyle, MyDomaine and Brightly, the Motherhood Smart Magazine, and many more magazines.

You can read more about photography on Flipboard in The Shot, the Photography Smart Magazine, and many more sources.

~MiaQ is curating Hot to Tot