Last weekend, while hiking with my wife on an otherwise beautiful Sunday, a drone buzzed by.

I don’t know about you, but these days we’re frequently seeing amateurs flying the things in parks, at the beaches, and in school yards. A few months ago, a neighborhood kid accidentally crash landed his on my roof and I had to do the cranky Mr. Wilson thing and get out the extension ladder and retrieve the gizmo. But secretly, I was thrilled. I mean, who doesn’t love drones?

“I wish I had a gun,” my wife said of the drone that disrupted our peaceful walk.

“Oh come on,” I said. “You better get used to it. Don’t you want Amazon Prime Air deliveries?” I mansplained that, what with the Whole Foods purchase and all, in no time, Amazon will have a perfect platform to reach us fast with its fleet of drones. Forget two-day delivery: The Prime Air program will deliver packages of 5 pounds or less, within 30 minutes. “Won’t that be cool,” I said.

“No,” she said—though here I am paraphrasing. (My wife’s people come from eastern Kentucky and they are a plain-spoken lot.)

“There are obviously safety questions. What happens to people on the ground if a drone flying overhead fails?” FAA Administrator Michael Huerta in prepared remarks at the Unmanned Aircraft Systems Symposium

Apparently, some people do not embrace the techno-future as fervently as me. That’s also evident in how the Prime Air program is rolling out: Amazon has been running trials in the UK (to mixed reviews) but is only permitted to do demos here while it works to overcome regulatory hurdles from our government, which is (I suppose) understandably cautious.

While Amazon waits for the regulators to get their act together, it’s been filing a flurry of drone-related patents here and around the world to cover a variety of logistics schemes to house and deploy drones in a retail environment.

Everywhere you look, drones are taking flight. According to Engadget, after an FAA law went into effect in 2015 requiring people to register their drones, some 770,000 people signed up. Of course, most hobbyists were unaware of the rule and didn’t register their flying machines, which is OK: in May, the law exempted hobbyists (to the chagrin of the FAA and others). Now, only commercial drone operators must get FAA licensing.

Regardless, the number of non-commercial drones in the U.S. is expected to triple in three years and reach 3.5 million by 2021, says Engadget, with another 440,000 in the commercial sector, per Reuters. And that doesn’t even include other kinds of drones, such as boats. 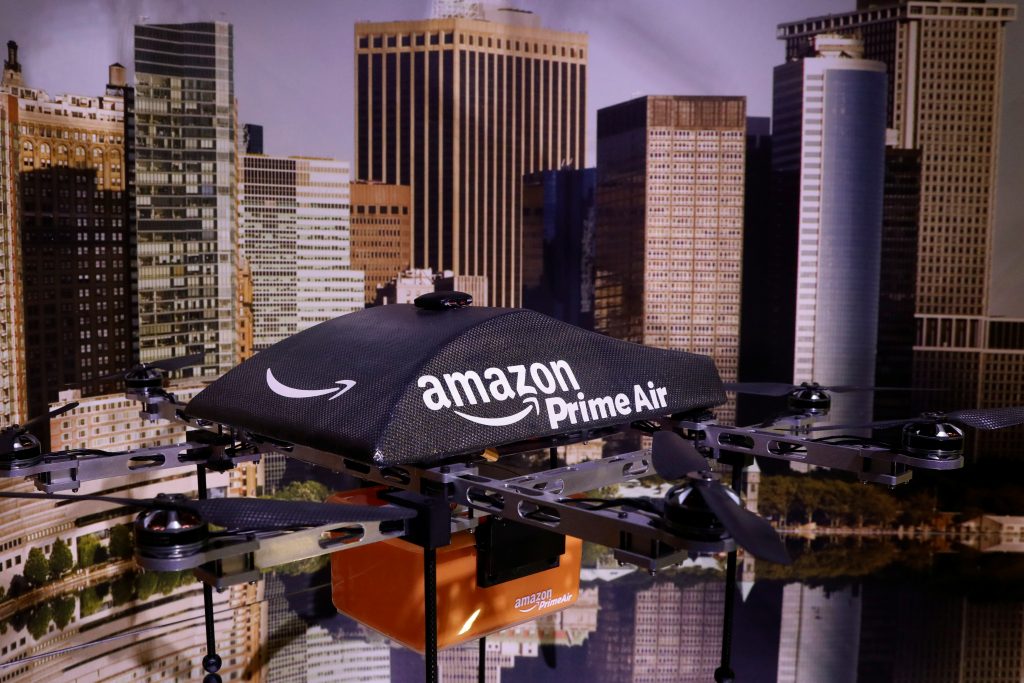 That’s a lot of drones, and you can be sure that it’ll take time for all of us—including drone operators—to adjust to our new drone reality. Last week, for instance, wildfires ravaged Northern California—which brought out a number of photographers who wanted to get some aerial pictures of the devastation. While The New York Times’s drone fly-over (here) was a terrific piece of photojournalism, firefighters and rescue workers caught in the hellscape complained that drones got in their way. 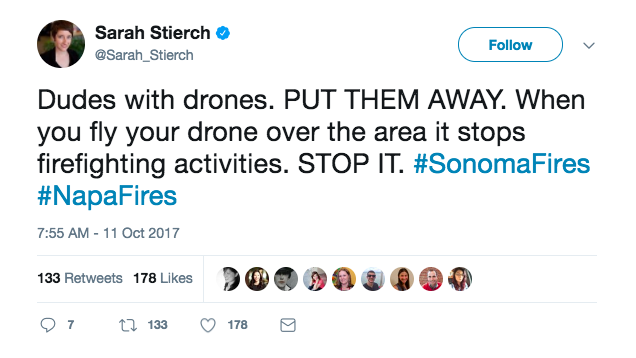 Indeed, elsewhere in California, localities have moved to ban hobbyist drones from disaster sites, such as fires.

Drones have caused other problems, too. A few weeks ago, a civilian drone collided with an Army helicopter in New York. No one was injured but the helicopter sustained some damage and the drone was pretty much destroyed. It could have been worse, I guess: Had the drone been flying over a military base, it could have been legally shot down, thanks to the green light the Pentagon gave the armed forces in August to do just that in instances where drones got too close to bases.

Drones have been used to deliver illegal drugs to prisoners in the UK, meth from Mexico to San Diego, and is such a common practice among drug cartels along that border that U.S. authorities have taken to using blimps to intercede. Personal injuries resulting from drone crashes are apparently frequent enough that the problem is gaining traction as a subspecialty among lawyers. And a recent NASA study found that people think drone noise is more annoying than automobile noise.

On the upside though, drones are being deployed in rural, remote areas and appear to be the right tool for many jobs in hard-to-reach places. The Moose Cree Nation, for instance, on a remote island in Ontario, will be getting drone deliveries by Christmas. The people who live there currently have to pay twice what people on the mainland pay for typical goods like laundry detergent. But drone delivery should be much cheaper than the airplanes that now do the job.

Last week, USA Today reported that Flirtey, a drone delivery company, is teaming up with a local ambulance service in Reno, Nevada, to race defibrillators to heart attack victims. (The company is hiring by the way. Here’s how to make money as a drone pilot!) 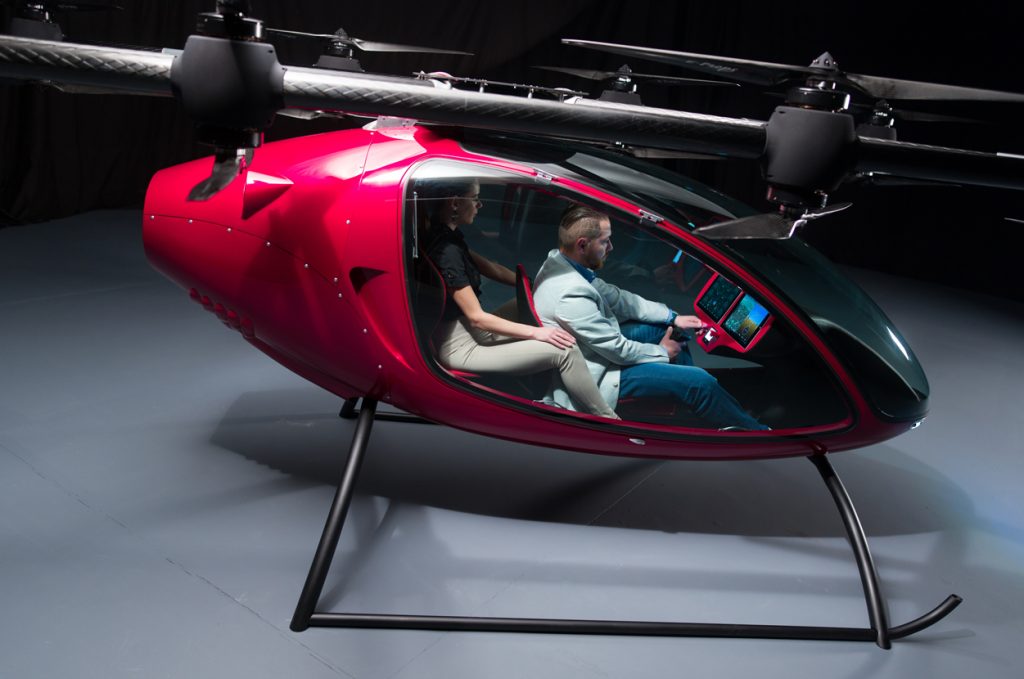 VTOL-MAVs? Sign me up. Naming problems aside, Uber, Google, Airbus and others are investing in VTOL technology, as if self-driving cars aren’t enough to solve our commuter needs. Dubai is already beta testing autonomous drone taxis, and Uber hopes to start testing air taxis there and in the Dallas-Fort Worth area by 2020, according to NBC. Detroit is looking to passenger drones as the evolutionary descendant of the automobile. I’ll never be able to get my wife in one.

OK, last thing on drones: Here’s a great video of one being destroyed by a flung roll of toilet paper at a soccer game…You know how a couple of years ago, some physicists determined that we were almost certainly living inside a computer simulation? Good news: Some other, even smarter physicists have proven that we aren’t…Apple is working on a “revolutionary new iPhone” that relies on a foldable, OLED screen, claims the Boy Genius Report. The company is said to be cutting Samsung—which manufactures OLED screens for the iPhone now— out of the picture because Apple fears that Samsung will steal its design…The IRS is suspending a $7.2 million security contract it had awarded disgraced, hacked credit bureau Equifax…Everyone is hating on tech, says the NYT—which seems to be a meme.