Campaigns Worth Knowing: Machine Zone, US Army, Levi’s and Starbucks

Let’s take a look this month at several campaigns that are taking advantage of those products and going native.

The inaugural Cinema Loop advertiser, Machine Zone, has continued the campaign on Flipboard for Game of War featuring singer, Mariah Carey, dodging dragons and rallying the troops in the midst of battle. The Cinema Loop creative really brings the game to life by highlighting the action in a way that a static image never could.

The Levi’s Fall video campaign illustrates a day in the life of young urbanites to illustrate a variety of Levi’s products, pulling in the user via Cinema Loop with a mini-version of the story arc that plays out in full once the play button is tapped.

US Army is targeting their Cinema Loop video ads to several topics such as Data Science, Space Science, and Mechanical Engineering across the Flipboard Interest Graph to align with people interested in STEM (Science, Technology, Engineering and Math education).

Starbucks
Using Promoted Collections and Promoted Stories this month, Starbucks is highlighting the 1912 Pike Blog, which covers a broad range of topics from roasting to growing beans. To reach the ideal audience, Starbucks is also using Interest Graph targeting to align with readers interested in culinary and artisanal foods. 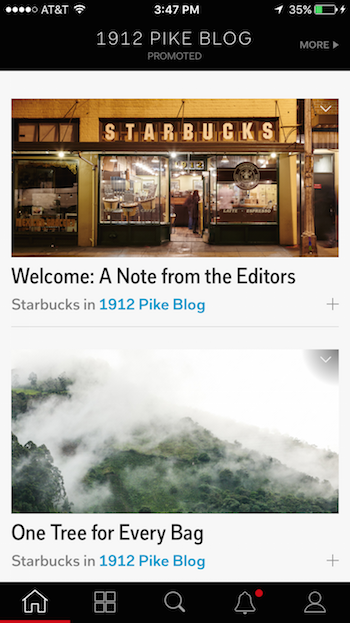