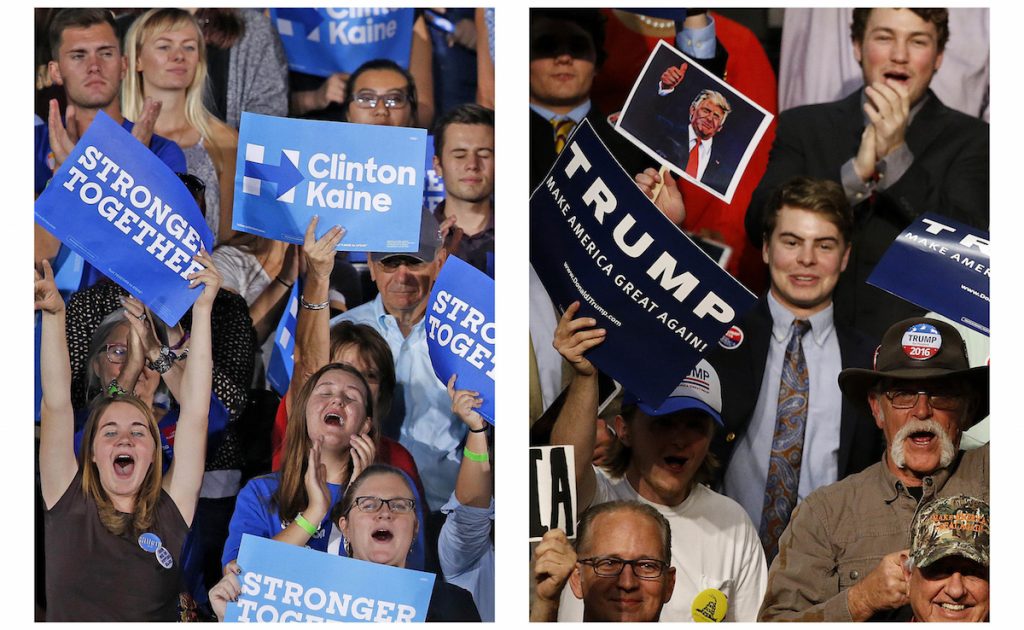 Five hundred and ninety four days ago, the 2016 presidential campaign officially began when Sen. Ted Cruz announced his White House bid. Nineteen candidates followed suit over the next months; they collectively took part in 25 debates. Donald Trump clinched the Republican nomination in May, and Hillary Clinton clinched the Democratic nomination in July. Since accepting their parties’ nominations, Clinton made 90 campaign stops to Trump’s 148, according to NBC News. Clinton raised $498 million to Trump’s $248 million (not including money he personally donated).

We interviewed a Washington Post political reporter nearly every month to take the pulse of the race, beginning in September 2015. We asked each journalist to describe the state of the campaign in five adjectives.

In September 2015, when Sen. Bernie Sanders and Dr. Ben Carson were rising in the polls, Amber Phillips said the campaign was “surreal, anti-establishment, polarized, twisty-turny and entertaining.”

In October 2015, when Joe Biden was still weighing a White House bid and Trump’s support was increasing, Philip Bump described the campaign as “weird, amusing, hyperactive, incessant and Trumpy.”

In November 2015, the race was heating up in Iowa. Trump and Carson were making headlines while Cruz, Sen. Marco Rubio and Gov. Chris Christie were rising in the polls. At the time, Janell Ross said the race was “intriguing…challenging to cover, revelatory, depressing and unmistakably important.”

By December 2015, we paused to take stock of the year that was, including the same-sex marriage Supreme Court decision, the rise of Trump, the departure of John Boehner as House speaker and the eight presidential debates that helped kick off the 2016 race for the White House. Political reporter Katie Zezima predicted the year ahead would be “unpredictable, polarized, raucous…[and] ‘yooge.'”

In February, shortly after the death of Supreme Court Justice Antonin Scalia, the race was heading to South Carolina and Nevada. Clinton and Sanders were locked in tight contest and Trump was leading among the then-six Republican candidates. Chris Cillizza, reporter and author of The Fix, said the election was “unpredictable, exciting, bizarre and unique.”

In April, all eyes were on the New York contest, where Clinton and Trump were in the lead. Washington Post National Political Correspondent James Hohmann said the campaign was “volatile, unpredictable, sophomoric, personal and enduring.”

In May, Clinton and Sanders were going at each other in the leadup to the final primary contests. Trump was taking the fight to Clinton. Clinton reporter Abby Phillip said the campaign was “unpredictable, exciting, surprising, historic and negative.”

In July, the Democratic and Republican conventions were around the corner, and Ed O’Keefe described the state of the races as “chaotic, fluid, unpredictable, unforgettable and unthinkable.”

In August, Trump’s poll numbers were down post-convention, and he was embroiled in controversy after his reaction to Khizr Khan’s Democratic convention speech. Clinton received a polling bump post-convention though she received criticism surrounding her use of a private email server as secretary of state. At that time, O’Keefe said the campaign was “chaotic, exhausting, vitriolic, historic and exhilarating.”

In October, Clinton and Trump were preparing for their third and final debate. The rhetoric became more vitriolic amid WikiLeaks releasing emails allegedly from within the Clinton campaign and women accusing Trump of unwanted sexual advances. Jenna Johnson, who is on the Trump campaign, told us the race was “historic, nasty, polarized, surprising and exhausting.”

Now, 20 months after this dramatic and controversial election began, nearly 40 million Americans have already voted early and millions more will head to the polls tomorrow to cast their ballots.

Track the latest polling, ads, vote tallies and more with these 10 Flipboard destinations.

1. Now Voting: Where the early vote stands and what to watch for when ballots are cast Tuesday.

2. 2016 Congressional & Gubernatorial Races: The battle for the Senate is particularly close. See which races will decide the balance of power.

3. 2016 Election: The Ads: The candidates will make their final pitches in ads airing Monday night and Tuesday. Watch the spots from throughout the campaign.

4. Politics Top Stories: Keep up with top political stories from Washington to the campaign trail.

5. Politics Rundown Email: Read the biggest stories hand-picked for our weekly and daily emails in this magazine.

6. Inside Flipboard: 2016 Election: Catch up on The Washington Post state of the race series, the CNN debate recaps, and the previews written before the biggest events of the last year plus.

7. Inauguration & The First 100 Days: Whoever wins the race will begin preparing for the presidential transition, inauguration and the first 100 days of their administration. Track their choices.

8. Tim Kaine: Learn more about the former governor and current Virginia senator who may be our next vice president.

9. Mike Pence: Learn more about the former congressman and current Indiana governor who may be our next vice president.

10. Barack Obama: The 44th president has been one of the most effective surrogates for Clinton. Follow the two-term president as he winds down his time in office and see what he decides to tackle next.